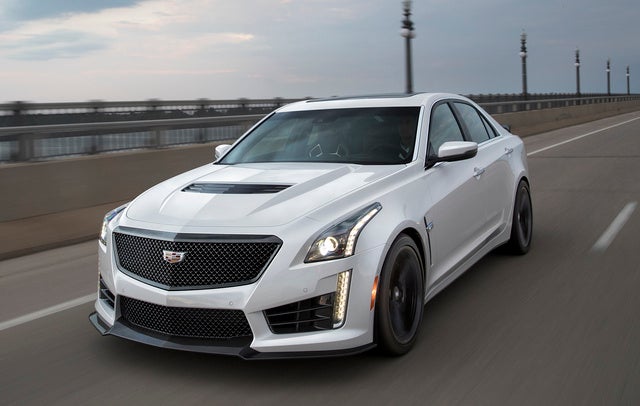 This definitely isn’t your grandfather’s Cadillac. Synonymous with performance to car enthusiasts, the Cadillac CTS-V shares nothing but its badge with the boulevardier DeVilles of old. Instead, this performance-oriented sedan was tuned alongside Germany’s best on some of the most demanding race tracks in the world.

Even if your daily commute doesn’t involve a racing suit and a helmet, the CTS-V’s precision can be appreciated at legal speeds. Not only is it downright rocket fast, thanks to its 640-hp V8 engine, but the CTS-V is exceptionally polished on a curvy road as well. That V8 is a supercharged 6.2-liter, and what may be even more impressive than its horsepower rating is its 630 lb-ft of torque, which endows it with substantial thrust at any speed. Floor the gas pedal at highway velocities and you'll hear the V8 and its supercharger wake up with a growl and a whine to deliver awe-inspiring, tire-shredding performance.

The numbers don’t lie: The CTS-V can hit 60 mph from a stop in a mere 3.7 seconds and, if you find a deserted runway, it won’t run out of steam until 200 mph. Those are figures generally reserved for supercars like Ferraris and Lamborghinis.

That said, the CTS-V is not gentle on fuel: The EPA says to expect 14 mpg city/21 highway/17 combined.

Helping the CTS-V perform so well its its remarkably svelte curb weight. Through extensive use of aluminum, parent company General Motors shaved the CTS-V down to about 4,100 pounds, more than 200 pounds less than arch-rival BMW’s M5.

The CTS-V is offered exclusively with a fast-shifting 8-speed automatic transmission. Unlike the competing Mercedes-AMG E63, the CTS-V is offered only with rear-wheel-drive, meaning snow belters should be prepared to invest in winter tires.

Even though it's ferociously fast, the CTS-V has a commuter-friendly docile side. High-tech magnetic shock absorbers deliver a ride that can be adjusted at the press of a button from track-ready stiff to relatively plush. And while it's by no means a soft-riding vehicle—that duty is reserved for the standard CTS—the CTS-V won’t rattle passengers riding in its roomy interior over badly rutted terrain.

That interior, like the exterior, is largely shared with the standard CTS, meaning there is plenty of stretch-out space for five. On the options list are 16-way adjustable Recaro front seats with aggressive side bolstering to help keep occupants in place during hard cornering.

A big 12.3-inch screen sits in the instrument panel, replacing the traditional analog gauge setup. This highly-configurable screen can be set to display a wealth of information at the press of a button. Meanwhile, the automaker’s CUE infotainment system takes up the bulk of the real estate on the center console. CUE has been recently upgraded to provide faster responses and is now compatible with Apple CarPlay and Android Auto.

One item not shared with the standard CTS, but cribbed instead from the Chevrolet Corvette, is an optional Performance Data Recorder. Operating somewhat like an aviation black box, the system utilizes both a camera integrated into the car’s grille and various sensors throughout the car to capture a video recording of the CTS-V that would, for instance, be useful to review after a track day. The recorder provides the kind of instant feedback you might find in a driving-simulator video game.

Users ranked 2017 Cadillac CTS-V against other cars which they drove/owned. Each ranking was based on 9 categories. Here is the summary of top rankings.

Have you driven a 2017 Cadillac CTS-V?
Rank This Car

I loaded a vehicle two days ago and it is still processing, please advise. Thank you!

How Can I Hide A Particular Listing?

Users can see the same car over and over but if the outside is just right but the inside has yellow seats why do I have to sea it in my search when the filters do not remove it because the seller did ...