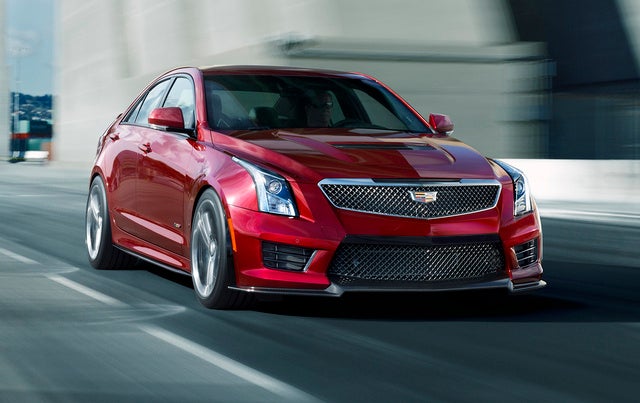 If ever there was a sign that Cadillac has recreated itself, the ATS-V is it. This svelte 4-door sedan may look fairly tame, but it was designed on Germany’s most demanding race tracks—the same courses where BMW, Mercedes-Benz, and Audi do their development work. But the ATS-V may actually beat those Germans at their own game.

Available as both a coupe and a sedan, the ATS-V is simply dripping with performance-oriented technology and engineering. Under its bulging hood lies a thundering twin-turbocharged 3.6-liter V6 engine rated at 464 hp and 445 lb-ft of torque, enough to take it from a complete stop to 60 mph in just 3.6 seconds. Find a legal place to do so—like, say, Germany—and the ATS-V will cruise to 189 mph.

Given the performance on tap, the ATS-V is actually reasonably thrifty when it comes to filling the tank. The manual-transmission trim is rated by the EPA at 17 mpg city/23 highway/19 combined, while the automatic version sees a slight shift in those numbers to 16/24/19.

As noted, the ATS-V is offered with both 6-speed manual and 8-speed automatic transmission options. Regardless of transmission, however, the ATS-V includes a launch control mode that uses the car’s brakes to ensure an absolutely perfect, repeatable drag strip run should you choose to exercise it in that manner.

Bringing things to a halt are Brembo performance brakes at all four corners. But not only is the ATS-V a rocket ship--it's also a deft handler. Cadillac’s Magnetic Ride Control suspension provides a ride quality that can be adjusted at the press of a button from boulevardier soft to racing firm.

For those looking for more out of their ATS-V, a track aerodynamics package is available to make the vehicle even nimbler, helping it both accelerate faster and grip the road better at high speeds. The ATS-V sends power to the rear wheels and comes from the factory with summer tires, so those in colder climates will need to plan for winter tires.

Inside, the ATS-V lives up to its sporty exterior with heavily-bolstered front seats. A Performance Data Recorder that operates somewhat like a high-tech airplane black box, allowing drivers to record their time on a race track via a high-resolution camera, is an optional item that has trickled down to the ATS-V from fellow-GM-brand Chevrolet’s Corvette.

Track-oriented drivers will want to check the box for the ATS-V’s optional Recaro seats, which add adjustable bolsters and include sueded microfiber inserts to better grip passengers during aggressive cornering.

Drivers stare at a 5.7-inch LCD screen in the instrument cluster that includes special “V” graphics over those in the standard, more pedestrian ATS, but the look inside is otherwise about identical from one model to another. That means the ATS-V includes a touchscreen in the center of the dashboard for Cadillac’s updated CUE infotainment. Derided at its launch for its slow response times, the CUE system has been updated with a faster processor, and it stands out among most infotainment systems for mapping software that utilizes the “pinch and scroll” functionality of a tablet computer. CUE includes Apple CarPlay, Android Auto, and 4G LTE Wi-Fi hotspot capability (which requires an additional monthly charge after an initial trial period).

On the safety front, the ATS line has not yet been tested by the Insurance Institute for Highway Safety, but it did receive 5 out of 5 stars in side-impact and rollover assessments by the National Highway Traffic Safety Administration.

An optional Driver Awareness Package adds a forward collision alert system that buzzes the driver’s seat and flashes a bright red light if it detects an impending collision. However, unlike the standard ATS, the system will not apply the brakes when activated.

Have you driven a 2017 Cadillac ATS-V?
Rank This Car