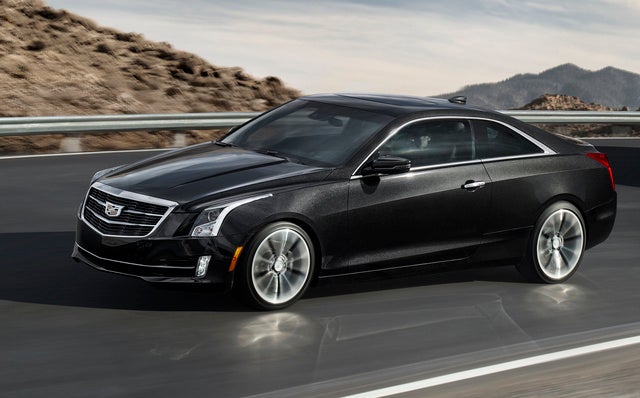 Serving as the style icon of Cadillac’s lineup, the ATS Coupe is as much a performer as it is a looker. That’s because beneath its svelte body, it's the same as the ATS sedan, which was engineered in Germany. The coupe, however, takes a slightly more upscale approach and is offered with fewer engine choices than the sedan.

That’s not necessarily a bad thing, however, since the 2-door utilizes the two more powerful of the ATS's available engines. Standard on the ATS Coupe is a 2.0-liter turbocharged 4-cylinder gasoline engine rated at 272 hp and 295 lb-ft of torque, which makes it one of the most power-dense engines available. A new 3.6-liter V6 engine was also added to the ATS line last year: this high-tech engine is rated at 335 hp and 385 lb-ft of torque, but the story goes beyond its numbers, as the V6 is smoother and more refined.

The turbocharged ATS Coupe is offered with both a 6-speed manual transmission and an 8-speed automatic; the V6 offers only the latter gearbox. Rear-wheel drive (RWD) is standard, while snow-belters will appreciate the optional all-wheel-drive (AWD) system.

To help save fuel, the ATS includes a stop/start system that cuts the engine under certain situations when the car is at a complete stop and restarts it automatically before the driver even hits the gas pedal. Speaking of fuel, one minor difference between the ATS Coupe and its sedan counterpart is the 2-door's cap-less fuel-filler system.

Opt for an ATS Coupe with the 2.0-liter, the automatic transmission, and standard RWD and you’ll net an EPA fuel economy rating of 22 mpg city/31 highway/26 combined). At the opposite end of the spectrum, the AWD 3.6-liter ATS Coupe is rated at 19/28/22.

The coupe's front track—the distance between the left and right front wheels—is slightly wider than the sedan's. This helps accommodate slightly different styling up front and is designed to improve road-holding. That’s not to say that either the coupe or the sedan is a slouch, however. Much of the ATS’s development occurred in Germany, on the same demanding race courses that have made BMW’s commitment to driving enjoyment so legendary. In many ways, however, the ATS beats the competitive BMW 4 Series at its own game.

All variants of the ATS Coupe are sportier than you might expect if you haven’t visited a Cadillac showroom in many years. Taut suspension tuning, an available “magnetic” suspension that’s adjustable at the touch of a button, and Brembo performance front brakes give the ATS remarkable dynamics on a curvy road. Additionally, the entry-level ATS comes with larger 18-inch diameter alloy wheels as standard, compared to the sedan’s 17-inchers.

Since the ATS Coupe does away with the base trim level available on the sedan, it naturally comes better equipped. Standard items include HID headlamps with LED running lights, a touchscreen infotainment system, and a Bose audio system with noise-canceling technology.

Still, there are many ways to personalize an ATS Coupe. Four interior trim designs that pair specific leatherette or leather upholstery with either wood, carbon fiber, or synthetic touches are available, depending on the trim level.

On the tech front, the ATS Coupe comes standard with parent company General Motors’ OnStar safety and concierge system and a 4G LTE antenna that sets the vehicle up as a mobile hotspot. Various OnStar and Wi-Fi packages are available as well, but they require an additional fee after the initial trial period. Cadillac’s CUE infotainment system features a high-resolution touchscreen integrated into the dashboard to control audio and, when equipped, navigation functions. The system also includes Apple CarPlay and Android Auto compatibility, and the standard backup camera is shown through the same display.

A host of collision-avoidance and convenience items are bundled into packages. Depending on the trim, the ATS Coupe can be optioned up with a system that sounds an alarm if it detects an impending collision. Higher-specification trims will even apply the car’s brakes if the driver doesn’t react quickly enough, in an effort to reduce the severity of a crash or (hopefully) avoid it altogether.

What's your take on the 2017 Cadillac ATS Coupe?

Marc I want one!

Have you driven a 2017 Cadillac ATS Coupe?
Rank This Car