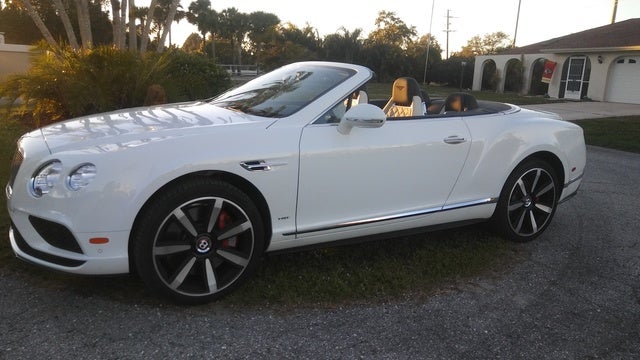 The Bentley Continental GTC luxury 2-door convertible idles in neutral for 2017, as it awaits the transition from its second to its third generation. Introduced in 2001 and revised in 2011, the popular grand tourer (GT) droptop is beginning to show its age, despite a minor update in 2016, and a complete redesign is on the way. Thanks to a more affordable price tag that helped widen the pool of potential upscale buyers, the Continental GTC has been highly successful as the automaker's first large-volume vehicle. The next generation will surely build on that success with a more streamlined design and improved tech features, bringing the classy convertible into the modern age.

Bentley is already testing a heavily camouflaged third-generation Continental GTC on the backroads of England, near the automaker's headquarters in Crewe. According to early reports, the redesigned Continental GTC convertible (and its GT coupe sibling) will ride on a new modular platform developed in conjunction with Porsche, which shares Bentley’s Volkswagen AG parentage, and is expected to appear sometime in 2017 for the 2018 model year. This much-needed update should help reduce the Continental GTC's weight and improve its athletics. Information on powerplants is still sketchy, but we can probably expect both a V8 and a 12-cylinder engine, as well as a possible turbocharged V6 and a hybrid option. As with previous generations, the hardtop GT coupe should arrive first, followed closely by the GTC convertible.

Until then, Bentley will continue to offer the second-generation Continental GTC in its showrooms, though supplies might start dwindle. No major updates are expected for the outgoing GTC this year, but it still has plenty to offer savvy buyers thanks to its update last year.

Although it’s beginning to look a little dated, the 2017 Continental GTC can still draw attention, especially when sporting one of the brighter paint shades. At nearly 16 feet long, the GTC makes a bold statement with its straight body lines and prominent front end. For 2016, Bentley reshaped the front bumper, widened the lower black mesh air intake, and replaced the black grille with a smaller chrome one for a more sculpted appearance. Other exterior updates include a more aerodynamic trunk lid and integrated spoiler, a new rear bumper and side vents, and restyled wheels. The crisp sidelines and pronounced hip over the rear wheels remain, resulting in a clean, tailored look.

The Continental GTC’s exterior features include self-leveling high-intensity discharge (HID) headlights, LED taillights, twin oval exhaust pipes, and black painted brake calipers. The powered soft-top roof and wind deflector fold down into a compartment behind the rear seats, and buyers can choose from 17 standard exterior paint colors, including newer ones like Marlin (dark metallic blue), Camel (gold), and Jetstream (bright metallic blue). Customization has always been a selling point for the Continental GTC, and the automaker offers nearly 100 paint choices by special order, with just about any other color imaginable available through its bespoke division.

The 2017 Continental GTC continues to come in four trims—the V8, V8 S, W12, and Speed—that are mainly categorized by their engines and performance characteristics and are offered exclusively with all-wheel drive (AWD). A 4.0-liter twin-turbo 8-cylinder powerplant paired with an 8-speed automatic transmission drives both the V8 and V8 S trims. It produces 500 hp and 487 lb-ft of torque in the base V8 trim and 520 hp and 502 lb-ft in the V8 S. This powertrain gets 0-to-60 times of 4.7 seconds for the V8 trim and 4.5 for the V8 S, with top speeds of 187 and 191 mph, respectively. Fuel-economy numbers for both trims check in at 14 mpg city, 24 highway, and 17 combined.

The Continental GTC W12 and Speed trims both receive a 6.0-liter twin-turbo 12-cylinder powertrain mated to the same 8-speed automatic transmission. In the Speed, the engine has been tweaked slightly for 2017 to deliver extra power—it now pumps out 633 hp and 620 lb-ft of torque compared to the W12’s 582 hp and 531 lb-ft. Both trims ride on an AWD platform, with fuel-economy numbers of 12, 20, and 15. The W12 boasts a 0-60 time of 4.4 seconds, which drops to an appropriately brisk 4.0 seconds for the Speed trim, and top speeds are 196 and 204 mph, respectively.

The Continental GTC’s large, noticeably luxurious cabin can accommodate up to 4 passengers comfortably. The seats are well-padded, swathed in leather, and available in 17 colors, and the interior features various types of wood and veneer trims like burl walnut or piano black. When in place, the thick fabric roof blocks outdoor noise to ensure a quiet inside environment. Even with the top down and the windscreen up, wind noise is kept to a minimum. Front passengers get plenty of leg- and headroom, though rear passengers might find legroom a little tight.

For its 2016 update, the Continental GTC received a smaller sport steering wheel and a redesigned center console and instrument gauges. The dash is nicely laid out—an LCD monitor in the center stack provides access to the infotainment system, which includes navigation, Bluetooth, a reversing camera, an 8-speaker audio unit, and a 30GB hard drive. However, some reviewers note the lack of newer tech features, such as USB ports, and the infotainment system’s overly complicated connectivity issues, which will likely be a focus of the next-generation update. Heated front seats and dual-zone automatic climate control are also on the list of standard interior features.

Despite its length and weight, the Continental GTC delivers a balanced, composed ride, with good acceleration and a stable stance during cornering. The suspension features electronic height adjustment and air springs with continuous damping control, and drivers can choose between Normal and Sport driving modes to adjust the shift points and exhaust note. Iron brakes with painted calipers come standard, though carbon-ceramic brakes are available. All trims ride on 20-inch wheels except the Speed, which receives 21-inchers. Standard safety features include antilock brakes (ABS), traction and stability control, and a range of airbags, including a driver’s knee airbag. However, high-tech safety equipment like blind-spot monitoring is not currently available on the Continental GTC, an omission which will hopefully be remedied with the next generation.

What's your take on the 2017 Bentley Continental GTC?

Have you driven a 2017 Bentley Continental GTC?
Rank This Car