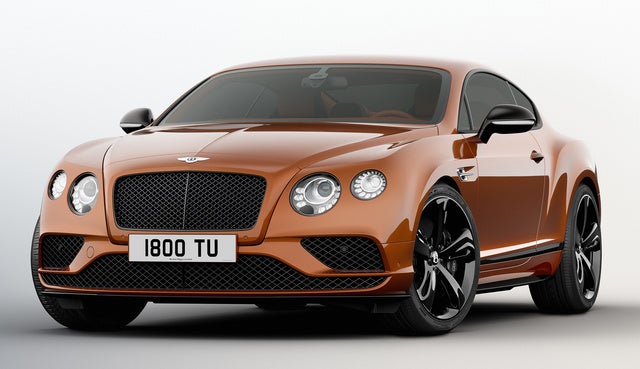 The ultra-luxurious 4-seat 2017 Bentley Continental GT coupe is available in three trims: the V8, the V8 S, and the Speed. For 2017, the W12 trim is deleted, while a new Speed Black Edition sub-trim is introduced. The track-inspired Continental GT3-R, boasting a lighter and lower frame, a lower gear ratio, and a 12-cylinder (W12) powerplant, is also offered as a new sub-trim.

Despite the Continental GT’s reputation as Bentley’s first mass-produced vehicle, the coupe features an interior with impressive hand-crafted workmanship and quality materials. The sculpted profile with the distinctive grille, understated trim pieces, and jeweled fuel-filler cap (standard on the Speed trim) continue to reflect the British automaker’s commitment to quality. Bentley, once a division of Rolls-Royce and now owned by Volkswagen AG (after an attempted merger with BMW), began manufacturing the Continental GT in Great Britain for the 2003 model year. The lineup is now in its second generation, and though it remains a pinnacle of automotive excellence, it’s beginning to show its age.

Both the Continental GT V8 and the V8 S carry a twin-turbocharged 4.0-liter V8 engine managed by an 8-speed Quickshift shiftable automatic transmission. In the V8 trim, it throws down 500 hp and 487 lb-ft of torque for a 0-to-60 time of 4.6 seconds, while the version in the more aerodynamic V8 S variant puts out 520 hp and 502 lb-ft and can reach 60 mph in 4.3 seconds. That engine automatically shuts down 4 cylinders at cruising speeds and achieves comparatively impressive fuel-economy numbers of 15 mpg city, 25 highway, and 19 combined.

The Continental GT Speed, Speed Black Edition, and the 2-seat GT3-R pack a 6.0-liter flex-fuel W12 engine, the most potent in Bentley’s arsenal, that has been upgraded for 2017 to offer 7 extra horses and 15 more lb-ft of torque for a total of 633 hp and 620 lb-ft. This powerplant is also combined with the 8-speed shiftable automatic transmission and features automatic cylinder shutdown at highway speeds. EPA mileage figures for the W12 engine are 12, 21, and 15, but chances are if you can afford the GT Speed, you’re not too worried about gas prices. Look for a 0-to-60 time of 3.6 seconds from the GT3-R and 3.9 from the heavier Speed trim.

The plush, hand-stitched leather seats, offered with an optional massaging feature, are roomy, comfortable, and feel almost tailor-made—which they can be through Bentley’s sky’s-the-limit “Personal Commission” customization program. Be advised, though, that all the personalization in the world won’t help 2 average-size adults cram into the tight rear seats of the 4-passenger trims.

The Continental GT V8, V8 S, and Speed trims offer genuine wood cabin accents, memory for up to 3 drivers’ settings, drilled aluminum pedals, and a large touchscreen infotainment suite featuring standard GPS navigation, a 30GB hard drive, and an 8-speaker audio system with satellite radio, a memory-card slot, and a DVD player. The Speed Black Edition sports a high-gloss black grille and headlight bezels and eye-catching contrasting exterior colors (including a new Cyber Yellow hue) for the front splitter, side skirts, and rear diffuser. The Speed Black Edition’s interior upgrades the wood trim to carbon fiber and offers contrasting stitching and piping colors for the upholstery and the center console to complement the exterior color scheme. Both the Speed and the Speed Black Edition also feature high-end details like jeweled oil and fuel-filler caps, while the Speed Black Edition is delivered with standard all-black 5-spoke 21-inch wheels and black or red brake calipers.

Expect added optional equipment in the 2017 Continental GT to include 2 Mulliner Driving Specification packages with upgraded wheels, drilled alloy pedals, quilted and perforated leather upholstery, and for the V8 S trim, the jeweled fuel-filler cap standard on the Speed trim.

What's your take on the 2017 Bentley Continental GT?

Have you driven a 2017 Bentley Continental GT?
Rank This Car