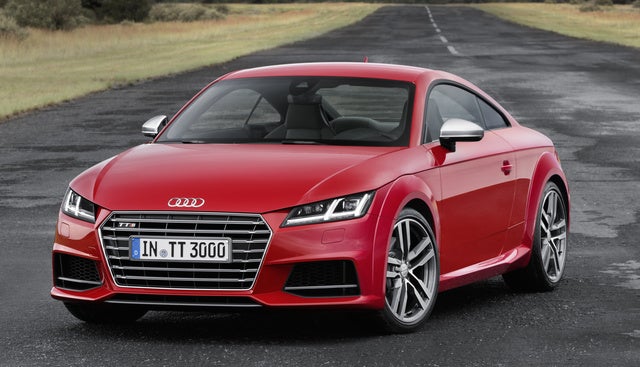 You don’t need a supercar to feel like you're driving at the height of performance. Sure, a midengine monster like the Audi R8 halo car will turn heads anywhere it goes. But for those less interested in making an entrance and more concerned with heading out toward the open road, the Audi TTS is the ultimate example of attainable performance.

The TTS is a 2+2 performance coupe, meaning that while it technically has seating for four, the rear seats are not the most spacious. The focus is on the driver and front passenger, and delivering thrilling performance in a vehicle that can easily serve as a daily driver. The current TTS was new on the scene for the 2016 model year and is being carried over into 2017. That doesn’t mean it goes entirely unchanged, however: the ’17 TTS now comes standard with a rear-view camera and power-folding, auto-dimming, and heated side-view mirrors.

Although based on the TT coupe, the TTS differentiates itself visually with a larger silver “Singleframe” grille, larger lower front valence openings (improving aerodynamics and forcing more air into the engine bay), a striking quad-tip exhaust, and 19-inch 5-spoke blade-design wheels. The TTS also has an upgraded rear bumper/diffuser and side sills for better aerodynamics, as well as an adaptive rear spoiler that can deploy at 75 mph and retract back into the rear decklid. If you want to up the car's look, two 20-inch wheel design packages are available, both outfitted in summer performance tires. It's also worth springing for the red brake calipers, which give your TTS a racy appearance.

Under the hood is a turbocharged 2.0-liter inline 4-cylinder engine. Sure, that’s the same displacement as in the regular TT, but in the TTS it makes an impressive 292 hp and 280 lb-ft of torque. Power is sent through a 6-speed S-tronic automatic transmission with manual mode to quattro all-wheel drive. Delivering all-weather traction and allowing the TTS to eat up corners with even greater efficiency, quattro has been updated for 2017 with the ability to apply a variable torque ratio as your driving requires. Bringing the TTS to a stop are 13.3-inch front and 12.2-inch rear ventilated disc brakes with unique TTS badging on the brake calipers.

Like the TT, the TTS has a MacPherson front and 4-link rear suspension. These are further improved with a magnetic ride suspension system, which runs a current through tiny metal particles suspended in the shock fluid, allowing you to soften or harden the ride with the push of a button. The suspension can also adjust the spring rate in milliseconds. The magnetic ride suspension, steering feel, throttle response, and even shift points can be controlled by Audi Drive Select, with preset Efficiency, Comfort, Auto, Dynamic, and Individual drive modes (Individual allows the driver to personalize each vehicle dynamic).

The TTS can hit 60 mph from a standstill in 4.6 seconds on its way to an electronically limited top speed of 155 mph. Fuel economy for the 2017 TTS has not yet been announced, but 2016 fuel economy was listed at 23 mpg city/27 highway/25 combined.

Slip behind the wheel and you might notice there's something missing. Over the past decade it has become almost expected to see a digital touchscreen in the center stack of any car interior. But no such screen is present in the TTS--just air vents and switches. All navigation, audio, and connectivity functions are located in the instrument panel: this is Audi’s Virtual Cockpit at work. Housed in a 12.3-inch digital screen, Virtual Cockpit can present a traditional gauge layout but is also customizable and can toggle between screens for Bluetooth connectivity, navigation, and other functions. Bluetooth smartphone paired with streaming music is standard, as is Sirius XM satellite radio with a 90-day subscription and smart key functionality with remote start.

Many of these functions are controlled by the Audi MMI (Multi Media Interface) system and its center-console-mounted rotary controller, which lets you cycle through menus on the Virtual Cockpit more easily. Atop the controller is a touch-sensitive pad that recognizes gestures, allowing you to input characters for phone, audio, and navigational operation. Elsewhere, you’ll notice standard features such as automatic climate control, leather and Alcantara seating, and heated 12-way power S Sport front seats with power-adjustable side bolsters for keeping you in place during hard cornering.

Base MSRP for the 2017 Audi TTS is $52,500. Add the Technology Package, 20-inch Y-design wheels, red brake calipers, and the available Bang & Olufsen sound system, and a well-optioned TTS will set you back upwards of $58,800. While it comes with a host of standard and available luxury and technology features, which should make the commute a breeze, TTS is a performance machine at heart, and its potent turbocharged engine will not be denied. This combination makes for an incredible blend of performance and comfort.

I Live In North Hollywood CA, Car I Am Interested In Is Located In Delray B...