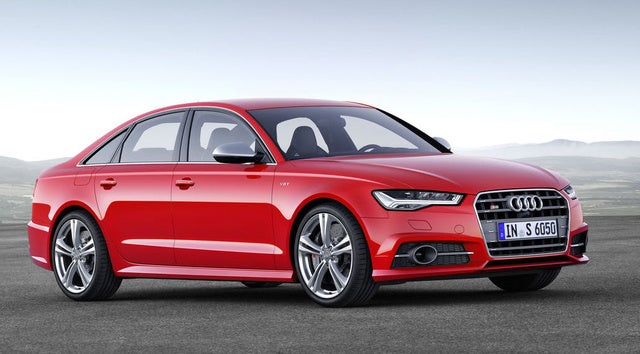 Since 1994, the S6 has been Audi’s high-performance version of its A6 midsize 4-door sedan. As such, changes to the S6 have followed those to the A6 closely. Updates to the 2017 model are minimal, since Audi is likely going to revamp the A6 and S6, along with the related A7 and S7, in 2018 as 2019 models. The current-generation S6 was launched a year after the current A6, so it’s technically not as long in the tooth as the A6, but it’s not exactly super fresh either.

Even so, Audi has made some changes to keep the S6 relevant and exciting, and these tweaks include an updated infotainment system, more exterior color and wheel choices, and a few changes to the bodywork. The bodywork changes include a new front end, side sills, rear diffuser, and rear bumper that together give a sharper overall look. These changes will not result in a price increase, and cars will show up at dealers this summer. Two trims are available: the Premium Plus (base) and the Prestige.

The S6 doesn’t look all that much different from a regular A6 apart from some badges, its wheels, and a handful of other styling elements. Under the hood, however, it’s in another league in terms of performance, and that’s part of what enthusiasts find so endearing about it. It’s a sleeper that doesn’t look like much to the casual observer, but is actually faster than most other automobiles on the road.

Under the hood is a 4.0-liter twin-turbo V8 that makes 450 hp and 406 lb-ft of torque. Power gets to the ground via a 7-speed D tronic dual-clutch gearbox and Audi’s standard quattro all-wheel-drive (AWD) system. The grunt from that potent V8 is enough to get the S6 from 0 to 60 mph in 4.3 seconds. Fuel economy for such a powerful, heavy (nearly 4,400-pound) car is an unsurprisingly mediocre 18 mpg city, but the S6 will manage a respectable 27 on the highway.

In addition to AWD, the S6 has adaptive suspension to deliver sharp handling without compromising too much comfort, and there are customizable settings for other driving dynamics like transmission, throttle response, and ride characteristics via Audi’s Drive Select system. Driving modes include Drive, Auto, Comfort, and Dynamic. An available Sport package adds adjustable steering effort, reprogrammed torque vectoring for the rear axle, and a sport exhaust--which is always welcome, because big Audi V8s sound fantastic.

Because it derives from the A6, the S6 has an excellent interior with a premium feel. High-quality materials and solid fit and finish can be found throughout the cabin. The atmosphere has been criticized for feeling a bit sterile and cold, but the quality can’t be denied. Audi’s MMi infotainment system has also been updated for 2017 to be faster and more usable. It was already one of the better infotainment systems in the industry, so the 2017 car should be stellar on that front.

In addition to sheer speed, the S6 excels on the safety front. For both crash avoidance and impact safety, it’s among the best of its kind. The Insurance Institute for Highway Safety gave it Top Safety Pick+ rating, and it received 5 out of 5 stars across the board on all tests conducted by the National Highway Traffic Safety Administration. Adaptive cruise control with stop and go traffic assist, lane-keep assist, blind-spot monitoring, and night vision are all available safety features.

The S6’s main competitors come from the other two in the German Big Three. The BMW M5 and Mercedes-Benz E63 AMG are similarly expensive super-sedans, but the S6 also competes with the Cadillac CTS-V and Maserati Ghibli, and people who yearn for something a little bit different will probably be eager to try the enticing and new-for-2017 Alfa Romeo Giulia Quadrifoglio. The Audi still keeps up with the rest in terms of performance, features, comfort, and value, though, and it holds its own in all the magazine comparison tests. But cars like the Alfa are for people buying their sporty sedan with their heart, while the Audi is still for people who shop with their head.

Users ranked 2017 Audi S6 against other cars which they drove/owned. Each ranking was based on 9 categories. Here is the summary of top rankings.