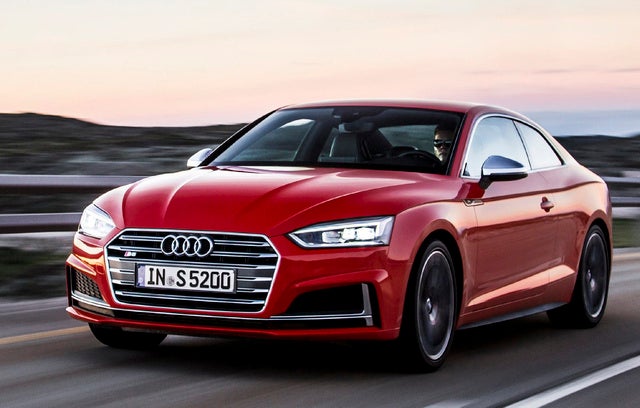 First introduced in 2007, the Audi S5 is the performance-oriented version of the A5, based on the platform of the 4-door A4/S4 models. The current S5 is actually based on the underpinnings of the previous-generation A4, and a redesign is due for the 2018 model year. That means the 2017 model goes largely unchanged from 2016, but Audi has made a few tweaks to keep it relevant against competition from the likes of similarly equipped versions of the BMW 4 Series, Mercedes-Benz C-Class, and Infiniti Q-Series. Headlights and grille frame are slimmer this year, and there are a few interior changes as well. The S5 can be distinguished from the regular A5 by slightly more aggressive styling, different alloy wheels, and a handful of badges, as well as a much more aggressive exhaust note you hear when pulling away.

The regular A4 gets a turbo four that’s good for 220 hp, but the S5 is in a completely different ballpark when it comes to power (and most everything else other than the interior appointments). The 3.0-liter supercharged V6 makes 333 hp and 325 lb-ft of torque, enough to get the S5 Coupe from 0-60 mph in 4.9 seconds, while the S5 Cabriolet manages the same in 5.1 seconds. Coupes can be had with a 6-speed manual transmission or an automatic, while the S5 Cabriolet is only available with the auto. All S5s come standard with quattro all-wheel drive (AWD), which typically diverts 60% of the power to the rear wheels. For a heavy, supercharged performance luxury car, fuel economy for the S5 really could be worse. The automatic Coupe’s 18 mpg city/28 highway isn’t great, but it’s better than one might ordinarily expect. A Coupe with the manual gets a slightly worse 17/26, while the Cabriolet does 18/26. As a supercharged performance car, the S5 runs on premium fuel.

In addition to bigger wheels, bigger brakes, and stickier tires, the S5 comes standard with a sport-tuned suspension. An Audi Drive Select system also lets the driver tweak transmission, steering, throttle, and suspension settings for different situations. The biggest difference in driving between the A5 and the S5 is, of course, the power and the noise, but the S5 is tuned for more spirited driving through the bends and has a sportier ride--though it remains comfortable when you want it to be.

In the S5's interior, it’s much the same story of luxury and technology as with the standard A5. Audi interiors are typically visually understated but have the high-quality fit and finish that you’d expect from a car that costs more than $50,000, and the S5 is no different. New interior trims include stainless steel, carbon fiber, and wood, and dual-zone climate control comes standard. The S5 can also be had with adaptive cruise control, navigation, and a Bang & Olufsen sound system. Google Earth and Street View mapping is new, and Audi has consistently updated the infotainment system in the A5/S5 to keep it relevant. The Cabriolet has a well-insulated power soft top that opens and closes in less than 20 seconds, and the Coupe is available with a panoramic sunroof that does reportedly cut down on headroom for taller drivers. Back seat room is adequate but not cavernous, and trunk space for the Coupe is a decent but unremarkable 16.3 feet. The Convertible gives up five feet of trunk space and the rear seats are a bit smaller as well.

The 2017 S5 hasn’t been crash tested yet, but the A4 on which both it and the A5 are based has typically done well, with mostly top scores from both the Insurance Institute for Highway Safety and the National Highway Traffic Safety Administration. A rear-view camera and parking sensors are bundled with navigation-equipped cars, and the S5 has the same outfit of airbags as the A4 and A5. The Cabriolet is also equipped with pop-up roll bars that detect when a vehicle rollover is imminent. Those who want even more power out of their 2-door Audi will go for the more-expensive V8 RS5, but the normal V6 S5 has more than enough power to have fun with and get into trouble.