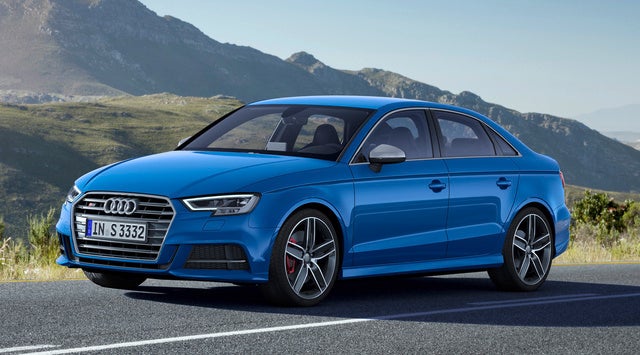 Looking for a Used S3 in your area?

When it comes to balancing luxury, performance, and good looks, the Audi S3 compact sports sedan has always managed to find the sweet spot. Owners and reviewers alike praise its nearly perfect blend of sportiness and comfort, mixed with a wide range of cutting-edge technology, safety, and handling features. Add in standard all-wheel drive, as well as a fairly reasonable entry-level price point (since the S3 sits at the front of Audi's lineup of increasingly large and powerful sports sedans, all bearing S or RS nomenclature), and the S3 represents a solid value, delivering a versatile ride for daily commuters who seek a car they can also cut loose on the weekends.

Based on the A3 sedan, the S3 comes equipped with a number of upgrades, including a splashier exterior design and a more powerful engine. For 2017, both of these areas see improvements, which sharpen the S3's appearance and put a little more power under the pedal.

Outside, the S3's updates for 2017 focus primarily on the front end and include a new, wider hexagonal Singleframe grille with crisper edges and corners. The S3 also gets slightly larger lower air intakes, a modified front air splitter, and new split-design LED headlights with a jagged shape that resembles a lightning bolt. The 2017 updates give the S3's front end a more refined look, but it also more closely resembles the nose of the S4. In fact, some reviewers say the two sports sedans are getting harder to tell apart, and although the S3 has a shorter wheelbase by about 7 inches (103.8 vs. 111 inches), the two cars do display similar proportions, which can cause some identity issues.

Audi offers the S3 in five new colors for 2017, including Ara Blue, Cosmic Blue, Nano Gray, Tango Red, and Vegas Yellow. In addition, the automaker tweaked the design of the housings for the S3's heated aluminum-optic side mirrors.

In addition to the exterior changes, Audi tweaked some of the S3's performance features, specifically its stability control and all-wheel-drive systems. The goal in updating the systems was to give the S3 a sportier feel when accelerating or cornering by transferring a little extra power from the front wheels to the back at certain times, resulting in better overall grip and stability.

Under the hood, Audi gave the S3's 2.0T TFSI turbocharged 4-cylinder engine a minor boost in output for 2017, to 308 hp, up from 292. Torque also increases to 295 lb-ft, up from 280. As in previous years, the S3 comes equipped with the same 6-speed S tronic dual-clutch transmission found in the base A3, though customized for the S3's performance nature. The powertrain drives the S3 from 0-60 mph in 4.7 seconds, to a top speed of 155 mph. Fuel-economy numbers for the engine check in at 23 mpg city/31 highway/26 combined. Premium fuel is recommended.

Inside, the S3's comfortable and well-equipped cabin gets even better for 2017, thanks to the addition of a number of new optional features, previously available only on Audi's larger vehicles. Most of the buzz centers on the new Virtual Cockpit, which first appeared on the Audi TT in 2016 and is now making its way to a number of the automaker's other models, including the S3. An optional upgrade, it replaces the standard dashboard gauges and readouts with an oval-shaped 12.3-inch color TFT screen, which can display a number of images and readouts.

Essentially, the Virtual Cockpit shifts all the information usually displayed by the car's smaller mid-dash 7-inch pop-up screen to the digitized display on the instrument panel right in front of the driver. Drivers can choose from a "classic view" mode, with analog-style instrument dials, or an "infotainment" mode, which places a centralized navigation map on the screen along with smaller dials, readouts, and displays for the navigation system, phone, and multimedia components. Drivers can switch between visual modes using steering-wheel-mounted buttons or an updated MMI smart dial, located on the center console.

Audi restructured the menus for the MMI car-management system, which includes the central rotary/push-button controller and 7-inch display as standard equipment. Navigation remains optional. Other new tech features available for the 2017 S3 include a number of driver-assistance systems, such as active lane assist, predictive pedestrian protection, traffic-jam assist, and emergency assist.

As in previous years, Audi offers the S3 in Premium Plus and Prestige trims. Both come equipped with such standard interior features as leather upholstery, 12-way power-adjustable front seats, dual-zone climate control, a flat-bottomed sport steering wheel with shift paddles, and a panoramic sunroof. The Premium Plus also gets a 10-speaker audio system with HD Radio, while the Prestige upgrades to a 14-speaker, 705-watt Bang & Olufsen unit. The Prestige also includes such additional features as adaptive cruise control with stop and go, Audi side assist, and the new active lane-assist system.

Although the S3 excels when it comes to comfort and technology, interior space in the 5-passenger sedan remains tight, especially in the rear seat. The seats are comfortable and supportive, and overall the cabin displays excellent fit and finish, as expected from Audi. Cargo space checks in at 12.3-cubic feet, about average for the segment.

The S3 rides on an S-tuned sport suspension with four driving modes, including comfort and dynamic, which make adjustments to dampening and steering, transmission shift points, and engine sound to deliver different rides to suit individual preferences and road conditions. The S package also adds larger 13.4-inch front brakes and 19-inch wheels. All S3s are equipped with a full range of safety features, including knee airbags, electronic stability control, and antilock brakes with electronic brake-force distribution. The Insurance Institute for Highway Safety named the A3/S3 a Top Safety Pick for 2016.

Bbecks7 Best value if you are looking for a sports car, AWD, everyday driver car.

Looking for a Used S3 in your area?