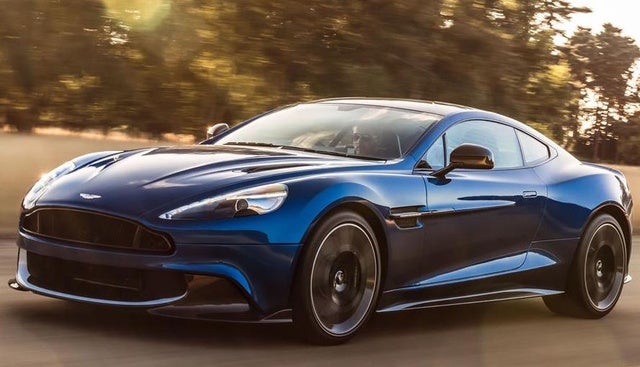 The Aston Martin Vanquish grand tourer (GT) sport coupe announces itself both visually and audibly for 2017, thanks to a new Vanquish S variant boasting an aerodynamics package, extra horsepower, a retuned suspension, and a throatier growl. Now with a new executive team and an alliance with Daimler AG, the British automaker has focused most of its attention on the DB11, which launched in 2016 to widespread acclaim. Meanwhile, the Vanquish, which was introduced in 2013, rolled along from year to year with only minimal updates. That changes for 2017, thanks to a number of enhancements, as the Vanquish nears the end of its current generation.

So how do you make the Vanquish, one of the world's most coveted vehicles, even more powerful? Simple—you improve the engine airflow. The result is the faster, better looking, and even more desirable Vanquish S. Engineers coaxed a little more power out of the V12 by revising the air intake system with larger inlet manifolds, which channel a greater volume of air to the powerplant. This results in a more distinctive engine note as well, particularly at higher revs. Aston Martin also recalibrated the 8-speed transmission to deliver faster, smoother shifts, especially at lower speeds, and provide a little more kick off the line. Just insert the stylized key, start it up, and hold on.

A 6.0-liter naturally aspirated V12 powerplant, which retains its mid-mounted placement behind the front axle, still drives the Vanquish's rear wheels via an 8-speed Touchtronic III automatic transmission with a manual shift mode. In the standard Vanquish variant, the V12 makes 568 hp and 465 lb-ft of torque (slight improvements over the 2016 model), and engine output for the new Vanquish S jumps to 580 hp (European drivers get 595 hp). Torque remains the same for the Vanquish S, though the powerplant now delivers stronger revs into the midrange, with peak torque at 5,500 rpm. Aston Martin claims a 0-to-60 time of 3.5 seconds for the Vanquish S, a 0-to-60 time of 3.6 seconds for the standard Vanquish, and a top speed of 201 mph for both. Fuel-economy numbers for the regular Vanquish remain an acceptable 13 mpg city, 21 highway, and 16 combined.

Exterior updates for the new Vanquish S variant include a redesigned front air splitter and a new rear air diffuser, which help reduce frontal lift and improve stability under heavy acceleration. Both the front splitter and rear diffuser are composed from carbon fiber to match the carbon-fiber body panels, and Aston Martin has added new quad exhaust pipes with a bolder design. The rest of the exterior's arcing, muscular lines remain unchanged, though the exterior updates do make the Vanquish S look slightly beefier than the original Vanquish.

As in previous years, Aston Martin offers the Vanquish (and now also the Vanquish S) in both 2-door coupe and convertible Volante body styles. Standard exterior features continue to include high-intensity discharge (HID) headlights, power-folding heated side mirrors, chrome side strakes, LED taillights, and 20-inch alloy wheels with Pirelli tires. The Volante adds a lightweight fabric roof that can retract in 14 seconds at speeds of up to 30 mph and stores itself under a tonneau cover behind the seats. A variety of available packages include unique exterior colors, graphics, wheel designs, and brake-caliper colors.

Chassis updates to the Vanquish S provide a definite improvement in handling, early testers report, with a tighter, more precise feel and better overall response. In retuning the suspension, engineers made adjustments to the damper and spring rates as well as the anti-roll bars. Vanquish drivers can choose from Normal, Sport, and Track drive modes, which are managed by the Dynamic Stability Control system. A limited-slip differential and carbon-ceramic brakes with Brembo discs come standard on both the Vanquish and Vanquish S.

Aston Martin again offers the Vanquish with a highly configurable interior, adding new options like Filograph quilted leather and Bridge of Weir Caithness leather as upgrades to the Vanquish S’s standard Strathmore leather upholstery. Owners can choose between a 2-passenger cabin with a storage area behind the front seats or a 2+2 seating arrangement, with an admittedly tight second-row seat. Cargo space stands at 13 cubic feet for the coupe and 9.9 cubic feet for the convertible.

With all its enhancements for 2017, the Vanquish S certainly delivers a spirited, more agile ride. The handling has better balance, the steering feels more precise, and the boost in horsepower puts it in line with competitors from Ferrari, Porsche, and Mercedes-Benz. It continues to excel as a GT rather than a dedicated street racer like the Ferrari F12 Berlinetta, which delivers 730 hp and is priced slightly higher. However, the Vanquish's biggest competitor might be its own stablemate, the new DB11, which has a more modern design, a 600-hp twin-turbo V12, a 0-to-60 time of 3.7 seconds, and a price that's almost a hundred thousand dollars cheaper. Aston Martin has announced that a new Vanquish will appear sometime in 2018, most likely for the 2019 model year, so this might be the current generation's final update. If that's true, this stylish GT supercar certainly intends to go out in a blaze of glory.

What's your take on the 2017 Aston Martin Vanquish?

Have you driven a 2017 Aston Martin Vanquish?
Rank This Car