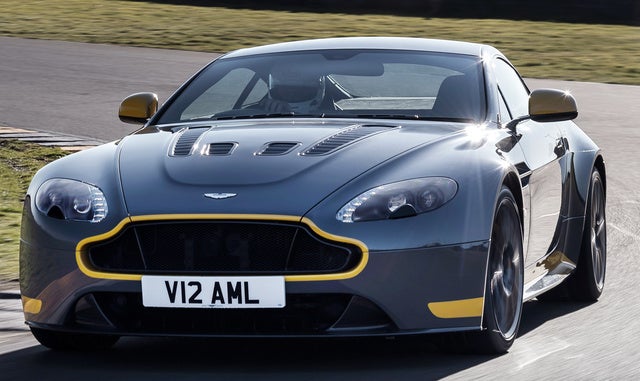 Introduced in 2005, Aston Martin’s V12 Vantage 2-seat luxury sports coupe evolved into the V12 Vantage S in 2014, with the convertible V12 Vantage S Roadster debuting for the 2016 model year. Boasting those premium fittings that have earned the British automaker its reputation, the 2017 V12 Vantage S is not only sumptuously appointed but continues its legacy as Aston Martin’s fastest production automobile. All that power and posh doesn’t come cheap, though, and the V12 Vantage has a price tag of $189,120 for the S coupe and $203,620 for the S Roadster. A new limited-production (100 units), track-certified, and even more powerful Vantage GT12 coupe will be offered as well.

Aston Martin, founded in 1913, solidified its legacy in 1964 when its overtly sensual DB5 starred as James Bond’s preferred ride in “Goldfinger.” Despite the big-screen success of the DB5, Aston Martin has had its financial ups and downs, including a fling with Ford from 1994 to 2007. The automaker is presently independent once again, though an agreement with Mercedes-Benz is expected to result in future Aston Martin vehicles sporting German-manufactured powertrains.

For 2017, the V12 Vantage comes loaded with premium features like cross-stitched leather upholstery and appointments, genuine wood accents, the liberal use of lightweight carbon fiber (including an exterior carbon-fiber grille), Kevlar-framed seats, and a glass key fob that Aston Martin calls an “Emotion Control Unit.” Insert this fob into its dashboard slot, hold it there for engine startup, and listen to the barely tamed purr of the engine. All of Aston Martin’s nearly unlimited bespoke personalization options have been simplified for 2017, but remain available through the Bond-inspired Q division, which is also responsible for the Vantage GT12.

The V12 Vantage S, S Roadster, and GT12 trims are slated to come with a 6.0-liter naturally aspirated V12 powerplant. In the S and S Roadster trims, this mill boasts 565 hp and 457 lb-ft of torque under the management of a 7-speed shiftable Sportshift III automatic transmission, and it can reach 60 mph in a mind-boggling 3.7 seconds on its way to a top speed of 205 mph. The GT12 with the same drivetrain configuration produces 592 hp and 461 lb-ft via a revised magnesium torque tube, new manifolds, and a titanium exhaust system. Mileage with the standard-production S trim is estimated at 12 mpg city, 18 highway, and 14 combined.

Critics have been largely unhappy with the V12 Vantage’s standard automatic transmission, which is disappointingly slow and noisy. New for the 2017, however, is a Sport-Plus Pack sub-trim available on the S that offers a 7-speed Amshift manual transmission. The Sport-Plus Pack’s transmission features a racing-style dogleg shift pattern that coaxes an extra 5 hp and 8 lb-ft from the V12 powerplant, with slightly lower mileage figures of 10, 16, and 12.

All V12 Vantage trims offer sumptuous accommodations and an iconic low-slung jet-interceptor profile. For 2017, the upgraded AMi III infotainment system includes GPS navigation and Apple CarPlay capability, but not all is perfect aboard this exotic Brit. The switchgear is not particularly enticing, and head- and legroom are tight for even an average-size adult. The coupe’s trunk offers a barely adequate 10.6 cubic feet of space, while the S Roadster has even less room due to the power-stowing soft-top roof. Standard safety features include self-leveling high-intensity-discharge (HID) headlights, a reversing camera, rear parking sensors (with front parking sensors available), and, on the S Roadster, rollover-sensing pop-up roll bars.

Some less expensive but equally performance-enhanced challengers to the V12 Vantage are the Jaguar F-TYPE R and the Chevrolet Corvette Z06, while the Porsche 911 and Audi R8 offer updated styling and features for a similar price. Interestingly, the Vantage GT12, which was created as a direct competitor to Porsche’s 911 GT3, had originally been designated the GT3 but was rebranded under pressure from Porsche.

Have you driven a 2017 Aston Martin V12 Vantage?
Rank This Car