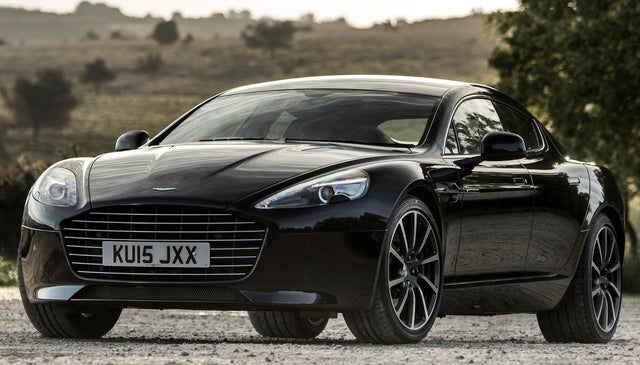 Lean and mean, sporty and sexy, potent and agile—these are words not commonly associated with a midsize sedan, but they fit the 2017 Aston Martin Rapide perfectly. This low-slung screamer was introduced for the 2010 model year and is often referred to as a 4-door coupe. In 2013, the Rapide garnered the “S” designation that currently names its only trim, although a wealth of colors, accents, and luxury appointments are available as sub-trims or options packages, like the Shadow Edition sub-trim, Piano Black interior package, or Exterior Carbon package.

The 2017 Rapide presents itself as a 4-passenger midsize sedan, but those riding in the back had better be on the small side—the sloping roofline of this British-made rocket, though aesthetically and aerodynamically pure, makes for cramped rear seats. That same head-banging roofline also hurts rear visibility, so the standard reversing camera will come in handy. Additionally, a mere 7.8 cubic feet of trunk space won’t allow luggage for more than two folks on a short vacation, although outfitting the Rapide with the optional folding rear seats does add more room.

Riding on the same VH platform as the DB9 GT coupe and its brand-new DB11 cousin, the Rapide shares an aluminum body and rear deck wing with its 2-seat siblings but gets a significantly larger carbon-fiber grille. Upgrades to the 2017 Rapide are minimal—the only noteworthy change is an enhanced AMi III infotainment system with GPS navigation and Apple CarPlay. And the 800-horsepower all-electric version Aston Martin promised for 2017? Don’t look for it until at least 2018.

A 5.9-liter V12 engine sends 552 hp and 465 lb-ft of torque to the rear wheels of the Rapide via an 8-speed shiftable Sportshift III automatic transmission. Expect a 0-to-60 time of 4.2 seconds and a top speed of 203 mph, with EPA mileage estimates of 14 mpg city, 22 highway, and 17 combined. The Rapide comes with 3-mode Bilstein shock absorbers that offer Normal, Sport, and Track driving modes. Normal is the most comfortable setting for ordinary driving, though it provides a noticeably stiffer ride than most rival high-end touring sedans. The Sport and Track modes tweak the traction and stability settings for additional control in powering through curves and out-maneuvering fellow track enthusiasts on straightaways. These two modes also unleash the V12’s mightiest roar on acceleration, underlining its prodigious performance. Ride and handling characteristics are enhanced even further with the standard front and rear antiroll bars, as well as built-in anti-dive geometry for sudden braking. And no wonder—the front brake discs measure 15.7 inches in diameter, while the rear discs measure 14.2 inches. The calipers are available in a variety of colors.

The Rapide’s interior features quality hand-stitched leather throughout, including a perforated leather headliner, which succinctly supports Aston Martin’s claim that the Rapide offers more leather than any of its other models. Its elegant cabin, reminiscent of the Vantage coupe’s, offers generous amounts of chrome, carbon fiber, and genuine wood, along with such luxury touches as memory for driver’s settings, a remote garage-door opener, and a 1,000-watt 14-speaker Bang & Olufsen audio system.

Aston Martin received a much-needed marketing boost in 1964 when its DB5 coupe was featured in the James Bond classic “Goldfinger.” Fittingly, the automaker’s bespoke customization department is known as “the Q division” in homage to Agent Q, who outfitted the celluloid super spy with unique and exotic transportation, weaponry, and espionage equipment. One such option is the Rapide Shadow Edition sub-trim, which features distinct exterior color choices like Ultramarine Black and Solent Silver and extra interior colors like Dark Knight and Sahara Tan. It also comes with a sport exhaust system and adds 13 ponies to the V12 engine’s output for a total of 565 hp. The available Piano Black package offers upgraded black leather upholstery and Piano Black interior accents, and the Exterior Carbon package boasts additional carbon-fiber exterior trim.

The 2017 Rapide comes with 4-wheel antilock brakes (ABS), traction and stability control, front side-mounted airbags, front and rear head-curtain airbags, high-intensity-discharge (HID) headlights, a tire-pressure monitor, and a remote antitheft alarm. It has not been tested for crashworthiness by either the government or the insurance industry. Noteworthy challengers to the 2017 Rapide include the Mercedes-Benz CLS-Class, the Porsche Panamera, and the Audi A7. Those rivals are a bit roomier than this sedan coupe, but all feature the same European-inspired curvaceous body paneling and arched roofline and similar pricing. The 2017 Rapide is listed at $209,825, which includes the gas-guzzler tax and a $2,825 destination charge.

What's your take on the 2017 Aston Martin Rapide?

GuruZRHVQ I hVE A 2011 RAPIDE AND IT IS STILL AMONG THE MOST BEAUTIFULLY PROPORTIONED CARS ON THE ROAD. THE PANAMERA, LIKE THE XKE 2+2 HAS AWFUL PROPORTIONS. MAYBE THAT HELPS WITH REAR SEAT HEAD ROOM BUT IT DOES NOTHING FOR THE OVERALL APPEARANCE. I FIND THE REAR SEATS TO BE QUITE ADEQUATE FOR MY, FEW, PASSENGERS. STARTING THE ENGINE IS AN UNOQUE EXPERIENCE EVERY TIME. THE TWELVE CYLINDER SOUND IS LIKE NO OTHER. THE VALETS LOVE IT. YES, THE RAPIDE IS QUITE A BIT MORE EXPENSIVE BUT I WOULD SAY WELL WORTH THE DIFFERENCE.

Have you driven a 2017 Aston Martin Rapide?
Rank This Car