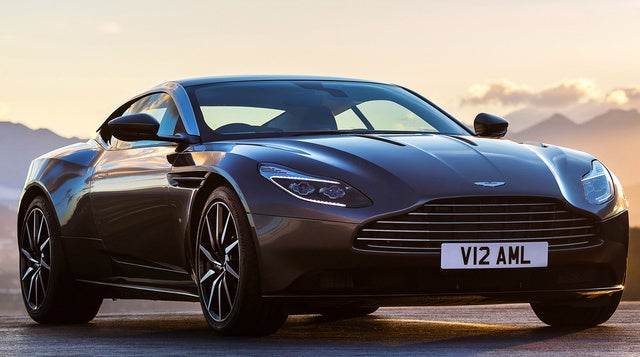 Unveiled at the 2016 Geneva Motor Show, the production version of the 2017 Aston Martin DB11 is now available—with prices for this very exclusive English grand tourer (GT) starting at over $200,000. While David Brown hasn’t worked with Aston Martin since the early ‘70s, his initials are still used as a naming scheme, and the DB11 is the DB9’s much-anticipated replacement. If you’re wondering what happened to the DB10, that was the concept car driven by James Bond in the 2016 film “Spectre.” As a low-volume, high-priced GT, the DB11’s competition is mostly limited to similar cars like the Bentley Continental GT, the Maserati GranTurismo, and the Ferrari GTC4Lusso—none of which are as good-looking as this new Aston.

The DB11’s styling is more extensive than that of the DB9 it replaces but remains graceful and isn’t too fussy—it’s still unmistakably an Aston at first glance. The hood is a single piece of rolled aluminum, with aerodynamic inlets behind the rear window and other small features that direct air up through the decklid. This creates what Aston Martin calls a “virtual spoiler” at the back to keep the rear wheels planted.

Under the DB11’s hood is a new twin-turbo 5.2-liter V12 engine mated to an 8-speed ZF automatic transmission with paddle shifters. As Aston Martin’s first series-production turbocharged engine, it sounds glorious and makes 600 hp and 516 lb-ft of torque as it revs all the way up to 7,000 rpm. That’s about 100 more horsepower and 60 more pound-feet than the DB9’s 6.0-liter V12. The DB11 is also lower, longer, and wider than the DB9. Despite its lightweight materials, the DB11 is not a lightweight car at 3,902 pounds but will still reach 60 mph in just under 4 seconds on its way to a top speed of 200 mph. There are certainly faster cars for the money, but out-and-out performance has never been the selling point for an Aston. It’s the total package of speed, driving pleasure, comfort, and style, which this car delivers in spades.

The DB11 is both lighter and stiffer than the DB9. The car is equipped with electronically assisted power steering and active torque vectoring, and its brakes are big 15.7-inch rotors with 6-piston calipers up front and 14.2-inch rotors with 4-piston calipers in the rear. Unlike some of its high-performance peers, though, this Aston makes do with steel brake rotors rather than carbon ceramic. This is a big, heavy car, and in Aston Martin tradition the DB11 is a GT through and through rather than a track-day car. You can fiddle with the adaptive dampers through three driving modes (GT, S, and S+), but it’s still designed to perform best on long drives through the countryside.

The inside of the DB11 is laden with technology, switchgear, and leather. While the DB9 was a product of the Ford era and had a few unfortunate parts-bin items from Volvo, the DB11 has a fresh design with superb fit and finish—as it should as a car at this price point. The only borrowed item is a Mercedes-Benz infotainment system, which is part of a larger supply deal between Aston Martin and the German automaker. The low-volume DB11 can be a fairly bespoke car, with personalized colors inside and out and available customized luggage, but all this of course comes at a price. While there are two seats in the back, they are better suited for storage than seating, unless the passengers are small children. Since the DB11 is both brand new and very expensive, not much safety information or crash-test data is currently available.

Aston Martin has bigger ambitions in terms of profitability, and the DB11 is only the first step in a planned lineup that will soon include a sports car, a crossover SUV, a Lagonda sedan, and another exotic. This is very ambitious for a carmaker as small as Aston Martin, especially one that’s no longer owned by a giant corporation. But if the DB11 is any indication, Aston Martin certainly seems to be on track.