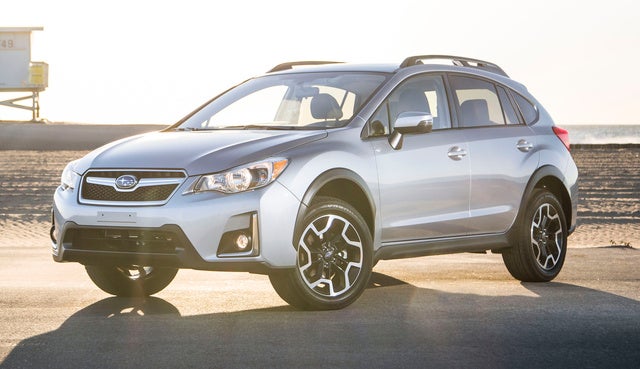 It might be easy to dismiss the Subaru XV Crosstrek as nothing more than a jacked-up Impreza, but the Crosstrek is different enough in its details and capabilities to have established an identity of its own since being introduced to the North American market for 2013. It’s the kind of vehicle that doesn’t do anything perfectly, but is rather an ideal all-rounder that does everything at least pretty well. While it has the look of a hatchback, it’s as rugged and robust as plenty of the more dedicated utility vehicles out there. And while fairly basic, it’s also capable, so car shoppers in places like New England (who still shudder at the thought of last year’s winter and what this next one might bring) can reasonably expect the Crosstrek to handle whatever their commute might throw at them--unless they work on a farm or a ski resort.

Changes for the 2016 Subaru XV Crosstrek are fairly minor, and include a new grille, fascia, bumper, headlights, and wheels. The base Crosstrek starts at $21,595, but better equipped trims with significantly more convenience and safety features are only a few grand extra. A hybrid version is also available.

Subaru makes some properly quick cars, but the Crosstrek is not one of them. As is Subaru practice, the car gets all-wheel drive (AWD) and a flat-4 engine, in this case displacing 2.0 liters and producing 148 hp and 145 lb-ft of torque, which unfortunately doesn’t come until fairly high in the rev range. The engine is mated to either a 5-speed manual or Subaru’s Lineartronic continuously variable transmission (CVT). The Crosstrek’s 3,200-pound weight, significant height, and low power figure make for pedestrian performance at best, but it does at least have larger front brakes than the Impreza on which it’s based. The Crosstrek will get 28 mpg combined with the CVT, 26 with the 5-speed manual, both decent but unremarkable figures. It’s worth noting that the lower, lighter Impreza will get 30 mpg combined, though the XV Crosstrek does have a larger fuel tank.

But although the XV Crosstrek has all the underpinnings of an Impreza, it has been lifted 4 inches for a total of 8.7 inches of ground clearance. It also has beefed up suspension and more off-road-oriented tires than does the regular Impreza, so it’s able to handle more rugged terrain, good at least for mild off-roading such as you'll find on camping trips or a muddy dirt road. The Crosstrek does have the Impreza's car-like driving characteristics and ride, but the crossover's extra height and weight make it considerably less nimble. Some have noted that the XV Crosstrek is fairly susceptible to crosswinds thanks to its tall, flat sides.

The 2016 Crosstrek's interior will be familiar to anyone already familiar with an Impreza. It’s largely the same look, feel, and equipment, although the Crosstrek's cloth upholstery is a bit rougher and seemingly more durable than the Impreza's. Subarus have never been known for having much personality or flair in their interiors and it’s the same basic, utilitarian story here with the Crosstrek, though 2016 models do get orange contrast stitching on a few of their interior pieces. The mid-range Premium trim features heated front seats and side mirrors, while the range-topping Limited gets leather upholstery, a leather shift knob, and a leather steering wheel rim, along with climate control. Premium and Limited models can also be had with Subaru’s Starlink telematics system, which is largely a copy of GM’s OnStar. Subaru also updated the infotainment system aboard last year’s XV Crosstrek, and this year’s model comes with a 6.2-inch touchscreen. An upgraded 7.0-inch screen is available as well.

The cabin's rear area is of course hugely important for the average Subaru owner, be they an outdoorsy hiker or just someone who makes a lot of grocery runs. All Crosstreks get a rubberized cargo tray that can be removed and hosed off. For items that are harder to fit, the 60/40 split rear seat is easy to fold forward and all 2016 XV Crosstreks come standard with a roof rack that can carry up to 150 pounds.

On the safety front, the Insurance Institute for Highway Safety (IIHS) has given the XV Crosstrek a top rating in every test, and the National Highway Traffic Safety Administration (NHTSA) has given it an overall rating of 5 out of 5 stars. Lane Change Assist and Rear Cross Traffic Alert are new for 2016, and Blind Spot Detection and Rear Cross Traffic Alert come standard on the XV Crosstrek Limited. Aside from its safety equipment and reassuring crash test ratings, the XV Crosstrek is also easy to drive and maneuver thanks to a low coachline, thin pillars, and large windows. Many cars sacrifice ergonomics and visibility for the sake of style, but the XV Crosstrek is a great example of a more well-rounded design.

As Subaru has gradually expanded its range, it seems to be making a car for just about everyone--even though almost every Subaru remains great all around. For people who require a bit more room for cargo, have a large dog, or do a bit more time off the pavement, the larger and roomier Forester is a good alternative for a similar price. People who like the combination of car-like feel and aesthetics with usable and rugged utility, however, might find the 2016 XV Crosstrek to be a great choice.

What's your take on the 2016 Subaru XV Crosstrek?

Have you driven a 2016 Subaru XV Crosstrek?
Rank This Car

Do You Deliver The Car That I Purchase.?

Will you deliver the car that I purchase..

why would the computer in a subaru crosstrek have to be sent across the country when the keys were lost?

On start up, when the car is cold, there is a noise that sounds like metal rubbing against metal. When the engine is warm no problem. My Subaru dealer says it is just the Catalytic converter heating...