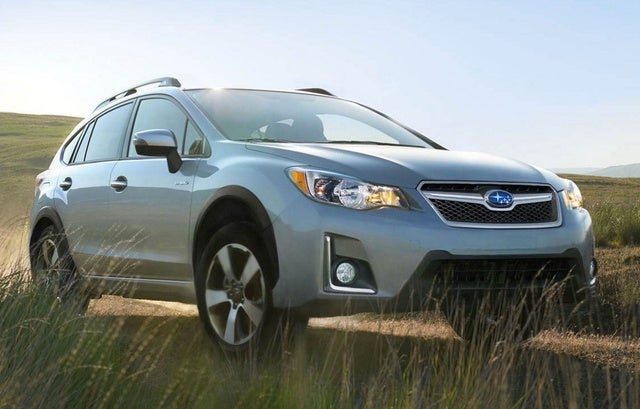 Looking for a Used Crosstrek Hybrid in your area?

Subaru has been relatively late to the gas-electric hybrid game compared to the world’s other major automakers, and its cars were never known for impressive fuel economy to start. The hybrid version of the Impreza-based XV Crosstrek that was unveiled at the New York Auto Show two years ago was in fact the company’s first hybrid, and other than an upcoming Impreza hybrid, it remains the company’s only electric-aided model. Subaru is, however, planning to expand its hybrid range.

For the most part, the 2016 Crosstrek Hybrid (which has now lost the "XV") is the same lifted and beefed-up Impreza as the regular Crosstrek, although Subaru’s engineers did make numerous changes underneath to ensure a quieter and smoother ride, supposedly making the Crosstrek Hybrid the sweeter of the two Crosstreks to drive. The Crosstrek is 4 inches higher than the regular Impreza and features different bumpers, a dark plastic body trim, a standard roof rack, and more rugged interior upholstery, while the Crosstrek Hybrid is further distinguished by a gloss-black grille, 17-inch alloy wheels, automatic grille shutters, and a nifty electric circuit pattern on the removable, washable rubber rear cargo tray. The base Crosstrek Hybrid starts at $26,395 (over $1,000 more than a range-topping Crosstrek Limited), while the more luxuriously equipped Touring trim starts at $29,995 and adds a moonroof, a sliding sunshade, leather-trimmed upholstery, and navigation.

What's really different about the Crosstrek Hybrid, of course, is what’s underneath the hood. Subaru’s hybrid technology is nothing revolutionary, just a 10kw (13.4-hp) electric motor that benefits from regenerative braking and is mounted between the engine and Subaru’s Lineartronic CVT (continuously variable transmission). When the car is at rest, the gas engine switches off while the electric motor keeps everything else working, and thanks to its 48 lb-ft of torque, the electric motor can propel the car on electricity alone for a short time, so long as the driver goes light on the throttle pedal. And while minimal, the hybrid drivetrain's added power is more than welcome for performance's sake, as the standard Crosstrek drivetrain gets 148 hp and 145 lb-ft of torque from the 2.0-liter flat-4, minimal for a 3,200-pound car.

As for fuel economy, the Crosstrek Hybrid gets a combined 31 mpg, which isn’t exactly stellar. It’s commendable for a rugged car with off-road capability, but it’s worth noting that the regular Crosstrek Hybrid gets a combined 28 mpg when equipped with the CVT. The difference in price between the two models will pay for itself with savings at the gas station, but it will take quite some time to do so. Subaru also claims the Crosstrek Hybrid can tow up to 1,500 pounds, but that’s not all that much to work with. But the Crosstrek hybrid has had several upgrades to the suspension, making for a smoother ride, and Subaru also paid more attention its sound deadening, meaning a quieter ride as well.

On the inside, it’s the usual straightforward, utilitarian look and feel of most Subarus. Subaru’s StarLink telemetrics system (similar to GM’s OnStar) comes standard on 2016 models, and Subaru’s infotainment system was updated just last year. The electric motor does intrude on interior space, but it takes away only a barely noticeable 2 cubic feet. A roof rack capable of holding 150 pounds is standard, and the 60/40-split rear seat is easy to flip forward. Buyers who are looking for something with a little more room for hauling would still be wise to check out a Forester.

As for safety, the Crosstrek gets a top rating in every test conducted by the Insurance Institute for Highway Safety (IIHS), and the National Highway Traffic Safety Administration (NHTSA) has given it 5 out of 5 stars overall. New safety features for 2016 include Lane Change Assist and Rear Cross Traffic Alert, and the Crosstrek Hybrid's low coachline, thin pillars, and large windows make for a reassuring drive. Just like the standard car, it’s a great all-rounder that does everything at least pretty well, but with a smoother ride and improved fuel economy.

What's your take on the 2016 Subaru Crosstrek Hybrid?

ralphjude1 Rav4 hybrid gets better mileage. Has more luggage space than Crosstrek. A Forester Hybrid would be nice.

Have you driven a 2016 Subaru Crosstrek Hybrid?
Rank This Car

Looking for a Used Crosstrek Hybrid in your area?

What Does CarGurus IMV Pricing Mean?

What does IMV stand for and how is it determined for a vehicles age, mileage and condition?

can this vehicle be towed behind an RV