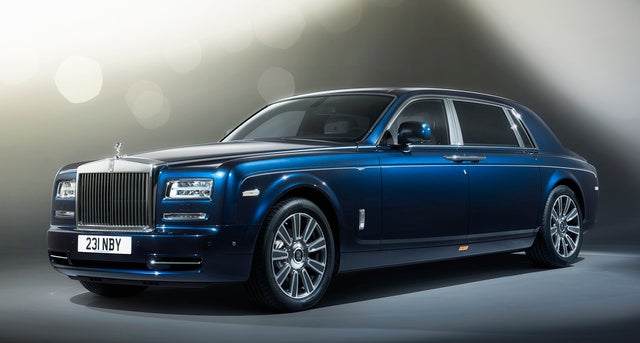 Is it heresy to think the iconic Rolls-Royce Phantom 4-door luxury sedan looks a little dated these days? Possibly, since words like "timeless" and "classic" are often used to describe the exterior design of the British automaker's flagship vehicle. But the 2016 version represents the tail end of the Phantom's first generation, which debuted in 2004. Rolls-Royce has freshened and updated the Phantom over the years, most recently in 2013, when it was rechristened the Phantom Series II. But for the most part the basic design hasn't changed much since the sedan's launch. The impressive oversized single-piece grille, long boxy front end, rectangular headlights, subtle front-to-back sidelines, and kicked-in rear roofline are more than a decade old now and the overall look is starting to show its age.

Rolls-Royce obviously realizes it's time to give the Phantom a full design overhaul and bring its exterior look into the modern era, and according to reports, that should happen soon. The latest information coming out of Goodwood, England, where the automaker is based, says a next-generation Phantom could make an appearance in 2017 for the 2018 model year. Until then, those who seek one of the world's top luxury cars will still want to take a close look at the Phantom, which in spite of its age continues to represent the epitome of the auto-making craft, especially when it comes to interior quality and comfort, as well as customization options.

Although the base Phantom remains unchanged as it enters its final year, Rolls-Royce took the opportunity to spotlight the company's bespoke design team by unveiling a highly exclusive, one-off luxury limousine version of the Phantom, called the Phantom Serenity. As its name implies, the long-wheelbase Serenity was designed to create the world's ultimate, most serene second-row seating compartment as a showcase for those who are routinely chauffeured around to various meetings and events.

Among the Serenity's highlights are more than 33 feet of specially handcrafted silk fabric, which covers the interior roof, doors, and panels. With a blossom motif created in China and fabricated in Great Britain, the silk interior evokes an unmatched level of luxury. It's complemented by such features as smoked cherrywood trim with bamboo embellishments, white leather seats, and hand-polished mother-of-pearl interior paint. Of course, all that bespoke design doesn't come cheap. Reports put the Serenity's sticker price in the neighborhood of seven figures (in British pounds).

Although the Serenity isn't scheduled for full production, it does demonstrate the lengths to which the automaker's bespoke team can go when creating a unique luxury car for discerning drivers. Rolls-Royce notes that 85 percent of all the cars it sells feature some sort of bespoke upgrade, which makes each Phantom distinctive in its own right.

Not that the base Phantom isn't already incredibly well-equipped, with a long list of high-end luxury, tech, and design features. The available interior wood veneers, made from walnut, elm, or exotic woods like Malabar and Dark Wenge, come from a single tree to ensure a consistent color and grain. Hand-stitched leather upholstery for each vehicle comes from the same production batch to ensure consistent color and texture. Owners can opt for two-tone leather upholstery, as well as lamb's wool carpeting in a wide range of colors. The power-adjustable heated front seats feature lumbar support and memory settings, with the RR logo embossed in the headrests for an elegant touch. In addition, the automaker offers three rear-seat options, including a bench seat for three passengers, two individual seats with a central occasional seat for a third passenger, and two individual seats with a fixed armrest and storage console in between.

Tech features for the Phantom include an 8.8-inch touchscreen, which owners can use to access the navigation and infotainment systems, and a Power Reserve dial in place of a traditional tachometer, which indicates how much spare power remains from the engine. The automaker also includes a 15-speaker 600-watt Lexicon audio system with satellite radio, Bluetooth, a weatherband, a 6-DVD changer, and a USB port. Other standard features include automatic climate control, a leather-wrapped steering wheel, and a parking distance control system with front, top, side, and rear cameras.

All Phantoms are commissioned by their new owners, and just about any option or extra is available, including a choice of more than 44,000 color hues for the interior and exterior, various types of veneers and trim, a number of seat options, a full-metal dashboard, optional steering wheels, and even gloveboxes with a cigar humidor or pen set. The long list of interior options also includes a slide/tilt sunroof, a rear-seat DVD entertainment system with 12-inch screens that fold into the seatbacks, and various types of drink coolers and drink holders. Owners can even add a Starlight Headliner, which mimics the appearance of a star-filled night sky along the Phantom's interior roof.

Outside, the Phantom establishes itself as one of the world's top luxury sedans thanks to a number of design features, starting with the iconic Pantheon grille up front, topped with the automaker's Spirit of Ecstasy hood ornament, which retracts into the grille at the touch of a button to prevent theft. The second-row "coach doors" (as Rolls-Royce calls them) are hinged in the rear, so they open in the front, and are power-operated to ensure easy opening and closing. They also include discrete umbrella slots for Rolls-Royce-branded umbrellas, which come standard with the Phantom. A variety of unique wheel designs include RR-embossed hub centers, which self-right themselves so that the RR logo is always easily readable. In the rear, exhaust pipes are hidden on either side of the bumper, although owners can opt for visible chrome-plated exhaust pipes instead. Adaptive LED headlights, a heated windshield, and rain-sensing windshield wipers are among the other exterior features.

Power for the 2016 Phantom continues to come from a hand-built naturally aspirated 6.7-liter V12 engine, which produces 453 hp and 531 lb-ft of torque. Working with an 8-speed automatic transmission, the V12 powers the rear-wheel-drive Phantom from 0-60 mph in 5.7 seconds, which isn't a bad time considering the vehicle's 5,840-pound curb weight. Fuel economy numbers check in the expected range of 11 mpg city/19 highway.

Underneath its attractive skin, the Phantom features an aluminum subframe and a self-leveling air suspension with continuous electronic damping, ensuring a smooth, flowing ride. For those who would like a sportier ride, the automaker offers a Dynamic Package, which includes a stiffer suspension, a thicker sport steering wheel, and tweaked shift points for the transmission. Power-assisted ventilated 4-wheel disc brakes come standard, but owners can also opt for a performance braking system. Safety features include stability control, traction control, and cornering brake control, as well as a full range of airbags and a state-of-the-art Intelligent Safety and Information System, which helps keep the Phantom upright and protect passengers in the event of an accident.

Built and assembled by hand, the Phantom has few peers, but those that do exist include competitors like the Bentley Mulsanne, as well as less-expensive vehicles like the Mercedes-Maybach S600, the Aston Martin Rapide, and the BMW 640i Gran Coupe.

What's your take on the 2016 Rolls-Royce Phantom?

TheHorror Nobody looking at a Phantom would cross-shop a 6 Series.

Have you driven a 2016 Rolls-Royce Phantom?
Rank This Car