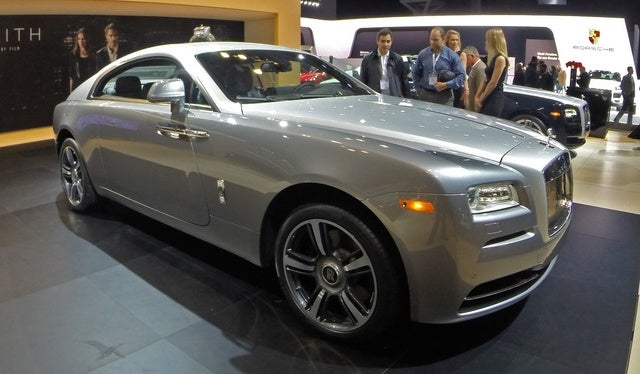 CarGurus has 7 nationwide Phantom Coupe listings and the tools to find you a great deal.

With an all-new, next-generation Phantom waiting in the wings and expected to arrive in showrooms for either the 2017 or 2018 model year, Rolls-Royce makes no changes to the 2-door coupe version of its flagship luxury vehicle for 2016. Instead, the British automaker spotlights its in-house bespoke custom-design department by unveiling the 2016 Phantom Coupe Tiger, a one-off version of the base Phantom Coupe that demonstrates some of the numerous design options available to elite buyers.

As its name implies, the Phantom Coupe Tiger mimics its animal namesake both inside and out, starting with its two-tone Burnt Orange and Arizona Sun exterior colors, which resemble the colors of a tiger's striped fur. Inside, custom features include Tan and Seashell handstitched leather upholstery, an embroidered tiger motif on the headrests, Maccasser Ebony wood trim, and Moccasin Lambswool floor mats, as well as a number of tiger-motif accents.

While you could make a case that the Phantom Coupe Tiger looks more like a giant butterscotch candy than a tiger, it certainly provides an interesting example of what the Rolls-Royce bespoke team can accomplish, and helps dress up an exterior design that looks a little dated these days. Although it debuted in 2008, the Phantom Coupe draws its overall design from the Phantom Sedan, which hasn't been substantially updated since its debut in 2004. Still, there's no doubt the 2-door, 4-passenger Phantom Coupe remains a handsome and impressive vehicle, and one of the world's most desirable luxury cars.

Like its two stablemates, the Phantom Sedan and the Phantom Drophead Coupe, the hand-built Phantom Coupe displays all of the line's familiar exterior elements, including the massive single-piece Pantheon grille topped by the retractable Spirit of Ecstasy hood ornament, the long boxy front end, the distinctive rectangular headlights, the flowing sidelines, and the distinctive rear roofline. It's equipped with the same V12 as the Sedan and Drophead Coupe, and offers the same interior elegance and customization options.

But the Coupe also differs from its siblings in a number of ways. Rolls-Royce has made the Coupe more dynamic than its stablemates by lowering its stance by about 2 inches, tuning its performance characteristics, and revising its suspension, chassis, transmission, and brakes. The automaker also shaved 9 inches off the Coupe's length (221 inches vs. 230 inches for the Sedan), making it slightly more maneuverable and improving its handling. Width remains the same for all Phantom models, at 78 inches.

In addition, the Coupe features rear hinges on its two power-operated coach doors, so they open at the front, much like the rear doors on the Sedan. Rolls-Royce maintains this not only helps improve the Coupe's stiffness but also makes it easier for passengers to access the rear seat.

Exterior features are decidedly high-end and include adaptive LED headlights, a heated windshield, rain-sensing windshield wipers, and LED parking, indicator, and brakelights. Visible exhaust pipes also distinguish it from the Sedan, whose exhausts are hidden. Five coats of exterior paint add to the Coupe's elegant appearance, and it rides on massive 21-inch wheels. Overall, it's a design meant to make a statement, and it still achieves that goal, standing out from the crowd wherever it goes.

Under the long hood, a hand-built naturally aspirated 6.7-liter V12 engine continues to power the Coupe. It generates an impressive 453 hp and 531 lb-ft of torque, which does a good job of moving the 5,688-pound vehicle. The V12 delivers its power to the vehicle's rear wheels through a specially tuned 8-speed automatic transmission, and can go from 0-60 mph in around 5.6 seconds. Fuel economy numbers check in at 11 mpg city/19 highway.

Inside, just about anything is possible, but even the basics are stellar enough. Each vehicle's hand-stitched leather upholstery, which can be customized to the owner's specifications, comes from the same production batch to ensure consistent color and texture. Chrome trim adds a touch of elegance, and the available interior wood veneers (in elm, walnut, or exotic woods) are each sourced from a single tree to ensure consistent color and grain.

Both rows of seats are heated. In the front, the 10-way power-adjustable front seats feature lumbar support and memory settings, with the RR logo embossed in the headrests. For the second row, owners can choose from three options, including a 3-passenger bench seat, two individual seats with a central occasional seat for a third passenger, and two individual seats with a fixed armrest and storage console in between. All seats provide plenty of legroom and headroom. The front seats sit high, giving the driver and passenger a good view of the road ahead, while the rear seats tend to settle back into the vehicle, providing a high level of comfort and privacy. Lamb's wool carpeting and a wool or cashmere headliner are among the other options, and owners can even choose the Starlight Headliner, which mimics a star-filled night sky above the passengers' heads.

An 8.8-inch touchscreen, hidden behind an analog clock centered in the dashboard, provides access to infotainment features and vehicle information. The BMW-based system includes navigation, Bluetooth, satellite radio, a 6-CD/DVD changer, and a 15-speaker premium Surround Sound audio unit. Multi-zone climate control, a power tilt/telescoping steering wheel, and a surround-view camera system are among the other interior features.

The Phantom Coupe rides on a stiffer suspension than the Sedan, and its brakes are tuned for a sportier feel. Still, when it comes to overall ride and handling, the Phantom Coupe emphasizes luxury and refinement over sporty performance. The V12 does a capable job of moving the big car along at a good clip, but lacks the dynamics that enable drivers to push it to extremes.

However, the Phantom Coupe achieves what it sets out to do, which is to offer a sporty alternative to its Sedan sibling, with slightly more aggressive handling and performance, as well as a higher level of customization than just about any other luxury coupe around.

What's your take on the 2016 Rolls-Royce Phantom Coupe?

Have you driven a 2016 Rolls-Royce Phantom Coupe?
Rank This Car

CarGurus has 7 nationwide Phantom Coupe listings and the tools to find you a great deal.