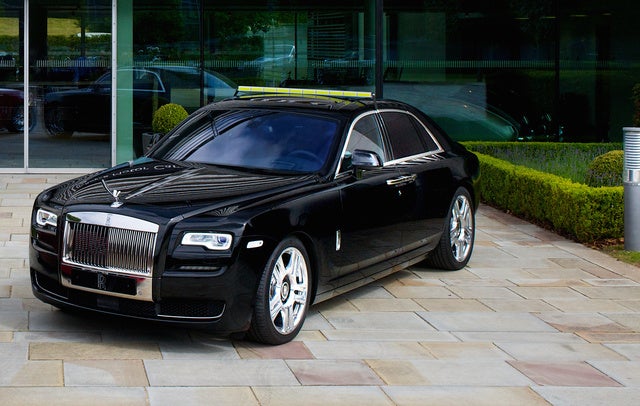 The company name has become synonymous with the pinnacle of high-end luxury. It's a car for tycoons and prime ministers and their chauffeurs, or newly-minted millionaire entrepreneurs who are ready to display their wealth but not yet ready to let go of the wheel. Whether you want to drive or be driven in the epitome of elegance and grandeur, the 2016 Rolls-Royce Ghost will satisfy.

Even iconic vehicles like the Ghost need updates every now and then, and the Ghost got that makeover last year. The stately exterior was refreshed with a new hood, bumpers, grille, and LED headlights. The notoriously numb road feel was upgraded with re-engineered suspension and steering systems. New air duct intakes increased airflow over the front brakes. The seats were reworked to become (somehow) more comfortable. A WiFi hotspot was added, as were new wood and leather interior options. And in the end, the Ghost got some new nomenclature to go along with all the upgrades: Series II.

The Ghost Series II version also got a powertrain upgrade. The 6.6-liter, twin-turbo W12 that delivers 563 hp and 575 lb-ft of torque remained the same, and carries over to this year, but the transmission made a serious evolutionary leap. The gear box now features “Satellite Aided Transmission technology.” Translation: it uses GPS technology to predict road changes and shift accordingly, making the Ghost a sort of fortune-telling luxury sedan.

All of that W12 power pushes the Ghost from 0-60 mph in a scant 4.8 seconds. That’s remarkable acceleration for a car that weighs more than 5,400 pounds, but it's not the only remarkable aspect of the Ghost’s performance. Despite its weight and oversized wheels, the Ghost holds true to to its name in terms of ride quality. It glides about in near silence, its smooth ride made even smoother with the new air struts, dynamic dampers, and rear-end kinematics that were included in last year’s remodel.

The only downside of the Ghost’s driving dynamics is the fuel efficiency. The Rolls gets just 13 mpg city/20 highway, but then again, that’s hardly a surprise. If you want fuel efficiency, you’re not going be shopping for a Rolls-Royce anyhow.

The Ghost’s silhouette is both simple and sumptuous, a piece of a usable art. The grille may have undergone some subtle changes, but it is still instantly recognizable, while the new LED headlights add a touch of modern to that iconic face.

It takes seven days to apply the standard five coats of paint and lacquer to each hand-crafted Ghost, and even then it’s still not ready to leave the factory in Goodwood, England. Each Ghost gets an additional five hours of hand polishing, along with hours more of hand painting as ox and squirrel hair brushes are used to apply the coachlines.

The Ghost’s cabin is, of course, lavish to a level most of us can only dream of. There are lambswool floor mats, cashmere-blended roof lining, hand-stitched natural grain leather, gauges that could double as luxury watches, and real wood veneers that are individually shaped, sanded, lacquered, and polished. And, of course, there’s every comfort, convenience, and technological option you might want, thanks to the Rolls-Royce Bespoke program.

You can order the Ghost in a Standard Wheel Base or Extended Wheel Base trim. The extra length means an extra 6.5 inches of rear legroom, which can be accessed by doors that offer an 83-degree opening. If you’re going to spend more than $300,000 on a car, it only seems right that it opens up with grandeur. And since every detail on the Ghost is grand, it only seems right the doors follow suit.

What's your take on the 2016 Rolls-Royce Ghost?

Have you driven a 2016 Rolls-Royce Ghost?
Rank This Car