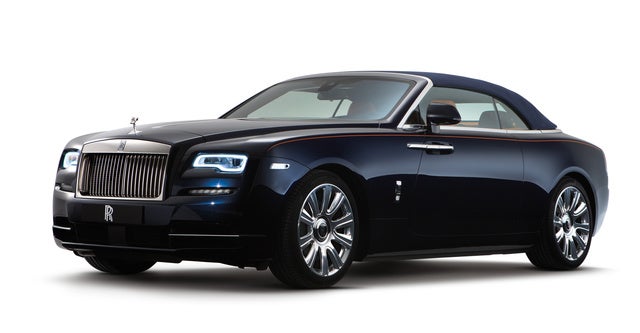 When Rolls-Royce introduces a new model to its lineup, it’s a pretty big deal. The luxury automaker may only make a few thousand cars per year, but that low volume, combined with price tags well into the six figures and over a century of making some of the world’s finest luxury automobiles by hand, makes the Spirit of Ecstasy one of the most exclusive and recognizable emblems in the automotive world. Drop-top Rolls-Royce models have often been especially magnificent, and the new Dawn, unveiled at the Frankfurt Motor Show last year, continues that tradition, becoming the fourth model in Rolls-Royce’s current range. Named as an homage to the ultra-exclusive Silver Dawn dropheads of the 1950s, the new car is basically an open version of the Wraith coupe, though Rolls-Royce is quick to point out the differences between the two. While the Dawn has the same dimensions and underpinnings as the Wraith (largely borrowed from the BMW 7 Series), the two models share only 20% of their bodywork, and there are numerous smaller differences as well.

Under the Dawn's long, sculpted hood is the familiar 6.6-liter V12 that makes 563 hp at 5250 rpm and 575 lb-ft of torque at 1500 rpm, and although this is an absolute behemoth of a car (with a curb weight of 5,700 lbs), that beast of a motor will still take it from 0 to 60 mph in 4.9 seconds. The gearbox, sourced from ZF, is an 8-speed automatic that works with a GPS computer to anticipate hills, turns, and other road conditions in order to optimize shifting. That might sound unnecessarily complicated (and it probably is), but that’s sort of the point with an exclusive car like this one. And though the millionaire playboys and rappers who are likely to buy the Dawn aren't likely concerned with fuel economy, Rolls-Royce claims the Dawn will achieve combined mileage of 19.9 mpg.

A car like this isn’t about handling, either, but Rolls-Royce does say the Dawn is the most rigid convertible on the market, thanks to a new suspension that features air springs and different anti-roll bars. Extra attention to sound deadening and a thickly padded soft top means the Dawn shouldn't be any noisier at road speed than the closed Wraith--that’s quite an achievement, as wind noise at highway speed is typically one of a convertible's biggest shortcomings. The top itself will retract in 21 seconds at speeds of up to 30 mph, and stows under a lovely wooden panel behind the rear seats that looks like something off a luxury sailboat. Inside, the Dawn is as plush and extravagant as you would expect from a Rolls, with what seems like a herd’s worth of leather and a forest’s worth of wood; it's the well-known combination of classic hand-built English elegance with modern technology. A rotary controller operates the car’s infotainment system and recognizes handwriting (including Mandarin and Arabic characters).

Along with the Wraith, the Dawn is the smallest car in the Rolls-Royce lineup, but there’s no doubting its commanding presence. The sculpted body lines, extravagant interior, and unmistakable suicide doors mean that no matter where you go in the world, you’ll be noticed. The Dawn also an important part of Rolls-Royce’s ambitious and so far successful plan to grow its customer base without compromising on quality or design. The company is going after younger buyers than previously, when its models usually attracted customers who were middle-aged or older. And unlike many Rolls-Royces of the past, the Dawn is a car meant to be driven by the owner, not a chauffeur. Its closest competition includes cars like the Bentley Continental GT Speed and Aston Martin Vanquish Volante; but coming in at well north of $300,000, the Rolls is quite a bit more expensive than either of the other two. For the world’s mega-rich who want to enjoy a little sunshine while cruising the French Riviera, South Beach, or Dubai, no other convertible on the market can really make a bigger statement than the Dawn.

Have you driven a 2016 Rolls-Royce Dawn?
Rank This Car