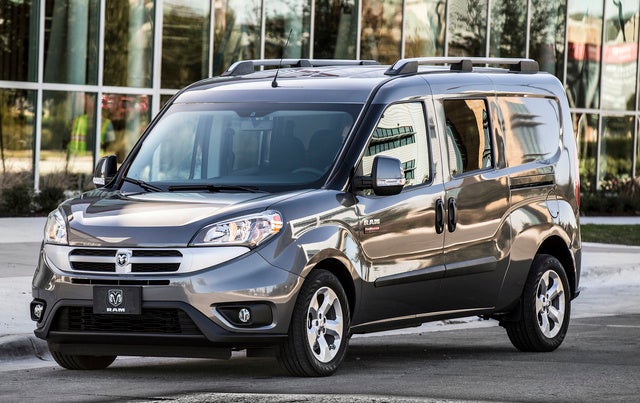 The days when tradespeople used converted people-haulers as work vans have passed. Ram, Ford, GM, and Nissan all now offer both compact and full-size commercial vans to those planning on using them as work vehicles. The 2016 Ram ProMaster City has many of the same features as its competitors, but it also happens to be slightly larger--which you can never write off as a huge advantage when it comes to commercial vehicles.

Ram builds the ProMaster City on the same production line as a European Fiat model in Bursa, Turkey, directly south of Istanbul. So it's made in Asia, even if you can’t get much closer to Europe, and its export location is in Italy. As far as we can tell, there are no American-built work vehicles in this class: the Ford Transit Connect was also first manufactured in Turkey and is now made in Spain. The Nissan NV200 and Chevy City Express are both made on the same line in Mexico.

The 2016 Ram ProMaster City is front-wheel drive, aiding winter traction and freeing up floor space in the cabin and cargo areas. The engine is Ram’s 2.4-liter, four-cylinder “Tigershark Multi-Air” unit with 178 hp and 174 lb-ft of torque, coupled to a ZF-made 9-speed automatic transmission. Those who tested the 2015 model noted that the engine is less than thrilling and that the transmission hunts for gears. But this may not bother tradesmen attempting to maximize profits by reducing fuel usage: the Ram ProMaster City earns an EPA rating of 21 mpg city/24 combined/27 highway. These numbers are actually slightly better than a 2WD Chevy Colorado work truck with a four-cylinder engine. Designed to contain a tradesperson's tools and materials, the ProMaster City has what Ram calls a best in class cargo capacity of 131.7 cubic feet and a best-in-class payload of 1,883 pounds. The inside roof height in back is about 51 inches, the cabin is about five feet wide, and the cargo area is about 83 inches long. The 2016 ProMaster City will also tow up to 2,000 pounds, though towing is not its main purpose.

The ProMaster City is a very well thought-out vehicle. It comes with either two front seats or with the front seats plus a rear bench that carries an additional three passengers. We assume that the cargo-oriented configuration will account for most of the van's sales. Side glass for the second row and cargo area is also optional, depending upon trim, and we assume most tradespeople will want the metal side panels rather than glass that could break or invite peering eyes. The rear-side doors slide open mini-van style and there is a 60-40 split rear door with the smaller half on the street-side (passenger side). This clever design makes it easier to unload the goods from the back without using as much space behind the vehicle as would one large swinging door. A cargo area separation panel with a sliding window is available as well.

Like the vehicle’s body, the inside has been designed for people at work. Used to seeing contractor vans where the dash is stuffed with papers? Ram offers overhead storage running the full length of the roof in the front of the cabin. There is an oversized glove box for storage, and Ram also puts a cubby in front of the passenger seat where you can toss dirty gloves. The heat and AC can even be operated while wearing said gloves, and the cabin contains cupholders and dual power outlets for smart-phones. A basic radio is standard, and the Ram U-Connect system with Bluetooth and touch-screen Navigation comes optional. A backup camera and backup warning system are also both optional.

Expect prices for the 2016 Ram ProMaster City to start at about $24,000 for the entry-level “Tradesman” trim, while the Tradesman SLT adds content for about $1,500 more. Those interested in the vehicle with the second row will select the “Wagon” trim, which starts at about $25K. The Wagon SLT adds even more content and will cost about $26,500. Ram offers an “Up-fit” configurator to help add things like ladder racks, interior shelving, and similar critical equipment.

Those looking for the largest of the small work vehicles in the market should put the 2016 Ram ProMaster City at the top of their list. Given how much details matter in a vehicle of this type, talking to one’s dealer would seem prudent rather than trying to shop on-line, as many personal-vehicle buyers now do.

What's your take on the 2016 RAM ProMaster City?

Users ranked 2016 RAM ProMaster City against other cars which they drove/owned. Each ranking was based on 9 categories. Here is the summary of top rankings.

Have you driven a 2016 RAM ProMaster City?
Rank This Car