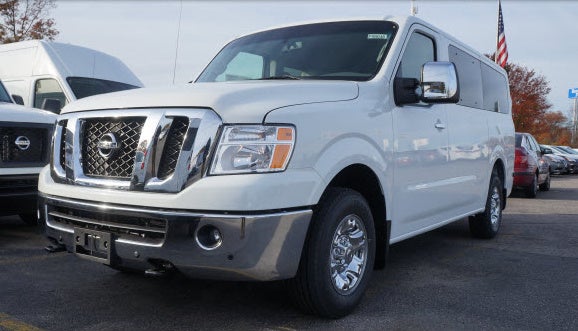 The full-size commercial passenger van has suddenly become popular, and Nissan’s 12-seat 2016 NV Passenger is trying to take advantage. Unlike its NV Cargo sibling, the NV Passenger is offered in only the 1-ton 3500 variation and with a single roof height, which puts it at a significant disadvantage against the likes of Mercedes-Benz’s Sprinter and Ford’s Transit Wagon, each of which are available in high-roof versions that will comfortably accommodate a 6-foot tall passenger. The Sprinter also boasts standard turbodiesel power (as does Ram’s ProMaster Window Van), but the NV Passenger offers no such alternative.

For the upcoming model year, the NV Passenger SL features the popular SL Technology package (with navigation, a rear-view camera, and NissanConnect smartphone apps) and a 5.8-inch touchscreen. Also debuting for 2016 are a pair of new exterior color choices: Pearl White and Cayenne Red.

The 2016 NV Passenger S and SV trim levels are powered by a standard 4.0-liter V6 engine that mates with a 5-speed automatic transmission for 261 hp and 281 lb-ft of torque. According to Nissan, you’ll be able to tow up to 6,200 pounds with the V6 and the optional Class IV towing package installed. Mileage figures are unavailable due to the van's size.

The NV Passenger SL features a 5.6-liter V8 powerplant that’s managed by the 5-speed automatic to the tune of 317 hp and 385 lb-ft of torque. Towing capacity jumps to 8,700 pounds with the V8 and the proper equipment. The V8 is also optional on the S and SV trims.

Owners of current NV Passenger models continue to wonder when the van will be offered with a high-roof option and/or turbodiesel power. But owners also continue to laud this Nissan people-hauler’s multitude of seating arrangements, easy-to-use controls, and simplified options structure.

What's your take on the 2016 Nissan NV Passenger?

Have you driven a 2016 Nissan NV Passenger?
Rank This Car

On Any Of The Cars That You Sell By Privet Owner Are They In Good Condictio...