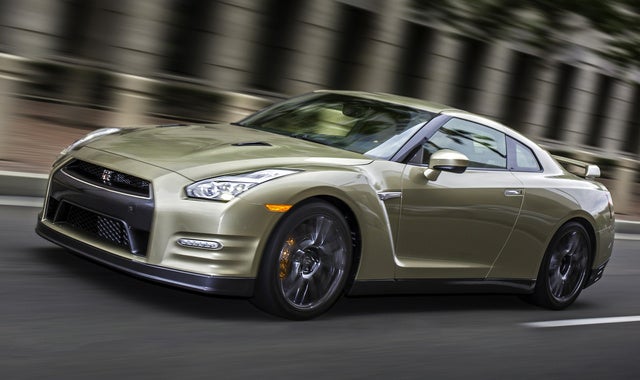 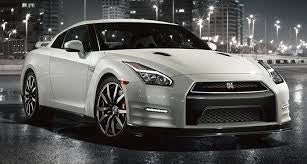 Long deprived of Nissan’s flagship performance car (except in video-game form), the United States market finally got the mythical GT-R, formerly part of the Skyline range, not long after the R35 version’s debut in Tokyo in 2007. An all-wheel-drive (AWD) computerized monster with an engine hand-built in a hermetically sealed laboratory, the GT-R and the Skyline before it rightly earned the nickname “Godzilla” for its savage performance. The car is also eminently tunable, and seeing custom GT-Rs with over 1,000 hp is not all that uncommon. Even just out of the box, though, the GT-R will outrun many exotics that cost several times as much, and the computerized dynamics of the chassis, suspension, and AWD system will let just about anybody with four limbs go very quickly around a track.

The GT-R hasn’t changed all that much since it hit these shores, and it’s good enough that a major redesign isn’t likely at least for a few years. The biggest revision came in 2011 with some changes in styling, a boost in power, and larger front brakes, among other improvements. 2016 still sees a few notable updates, however, including new 20-spoke forged alloy wheels with a dark finish in place of the previous 10-spoke design. A special 45th Anniversary Gold Edition (yes, the GT-R has been around that long) is also another limited trim for 2016 that has the makes of a future collectible. It’s painted “Silica Brass,” aka gold, and features a special gold plaque in the interior. Only 30 of them will be sold in the U.S. Other revisions for 2016 include a tweaked suspension for a supposedly enhanced ride, new front and rear LED lights, a standard Bose Active Noise Cancellation system, and a carbon-style instrument cluster.

Only three trims are available for the GT-R. Confusingly, the GT-R Premium is actually the base trim and starts at $101,770. The GT-R Black Edition starts at $111,510 and adds special metallic black 6-spoke forged wheels, a dry carbon-fiber rear spoiler, and a unique red-and-black interior. Back at the top of the range is the more performance-oriented GT-R NISMO, which starts at $149,990 and features a sports suspension and a front spoiler. The NISMO does not come with noise cancellation. Those living in colder climates can also take full advantage of the GT-R’s AWD with a Cold Weather Package that adds all-season tires and a unique coolant-to-water ratio. Another options package is the Premium Interior Package, which finishes the cockpit in an attractive red-and-ivory color scheme.

Countless magazine comparison tests have seen the GT-R top the list when it comes to performance. All 2016 models have the now-familiar 3.8-liter twin-turbo V6, which makes 545 hp and 463 lb-ft of torque. In the NISMO, the power figure is raised to a full 600 hp. That power drives through a 6-speed dual-clutch gearbox with paddle shifters. Approaching 2 tons, the GT-R is no featherweight, but its ample power and incredible grip from the AWD system make for fearsome acceleration both in a straight line and coming out of the corners. The bodywork is a combination of steel, carbon, and aluminum and is shaped cleanly enough to achieve an impressive 0.26 coefficient of drag in addition to actual downforce for improved grip. The Dunlop run-flat tires that come on a GT-R are also filled with nitrogen, which is more stable and less prone to expansion and contraction than regular air. All 2016 GT-R models achieve fuel economy of 16 mpg city/22 highway.
The Bilstein DampTronic driver-adjustable shocks responsible for the GT-R’s ride and handling have three settings: Normal, Comfort, or R for track-oriented driving. These same options are selectable for the gearbox as well. Speed-sensitive power rack-and-pinion steering also gives more aid at slower speeds but allows for more direct steering input at higher ones. Braking is by large cross-drilled two-piece Brembos with 6-piston calipers in front and 4-piston calipers in the rear.

On the inside, the GT-R features push-button start, available carbon trim, and an 11-speaker specially designed Bose audio system. One of the more notable elements of the interior, though, and one that goes very well overall with the high-tech Japanese character of the GT-R, is the large multifunction display in the middle of the instrument panel. Made in collaboration with the same people who designed the Gran Turismo video games, it very much looks like a video game (not in a cheap way) and features 14 pages of mechanical and driving info on the car. As for safety, the GT-R has front seat-mounted side impact supplemental airbags for the driver and front passenger as well as roof-mounted curtain side impact supplemental airbags to protect the heads of front-seat occupants.

The GT-R is a big car and feels it, and more than a few enthusiasts have complained that driving it actually feels more like playing the aforementioned Gran Turismo video game than driving an actual car. Those seeking a more raw, connected driving experience would therefore probably be happier in a more traditional sports car, but for people who want the absolute most performance for the money, the GT-R is really one of the only choices.

WHY DO SOME CAR DEALERS ADVERTISE ON CarGURUS, A 'SELLING" PRICE, ON TOP OF...

WENT TO A DEALER WITH A VERY SPECIFIC PRICE ON THE CAR, ONCE THERE THEY WHERE QUOTING 25,000 MORE.... SOME ADVERTISE THE REAL PRICE THEY ARE ASKING, OTHERS ADVERTISE "FAKE" SELLING PRICES ON TOP OF ...