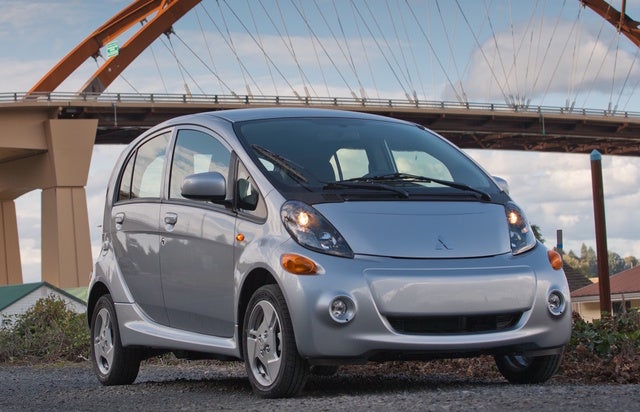 EV purists will be happy to know the Mitsubishi i-MiEV returns to the US in 2016. The car has been on-again, off-again since its introduction with no 2015 model or 2013 model. By all appearances, Mitsubishi is not preparing a substantially new 2016 i-MiEV. Rather, the emphasis seems to be on repackaging the car, but we do have some facts and figures and a bit of perspective on this battery-electric vehicle to offer.

The 2016 Mitsubishi i-MiEV will have an EPA-estimated range of 62 miles. This makes it perhaps the least range-capable battery-electric vehicle (BEV) that one can find. Its energy efficiency ratings are 126 MPGe city/99 highway/112 combined. The EPA estimates the i-MiEV uses 0.2 barrels of oil each year. It scores a 10 on the smog scale (the cleanest possible on the scale).

Mitsubishi says that the charging time of the 2016 i-MiEV will be 22 hours at 8-amp current, 14 hours at 12-amp, and 7 hours with a 240V/15A Level 2 charging system. One feature of the i-MiEV is its CHAdeMO Level 3 DC Quick Charger. Using this Quick Charger, one can charge to 80% of battery capacity in less than 30 minutes according to the automaker.

Regarding its features, the i-MiEV, like many cars, can pre-condition its cabin for warmth or cooling. There are three drive modes: ECO maximizes battery life, B provides maximum regenerative braking, and D applies full power. Full power is a relative term. The i-MiEV lumbers from 0-60 mph in approximately 14 seconds, and in some reputable tests, it took even longer. That makes it one of the slowest cars for sale in North America. Most serious i-MiEV shoppers understand this and have reasons for still accepting it. Just for comparison purposes, a Nissan Leaf does the same sprint in about 9.5 seconds, a BMW i3 in under 7.5, and you don’t want to compare it to what a Tesla Model S can do.

Inside, the 2016 i-MiEV meets the standards for a subcompact car. Notables are the keyless entry, heated front seats, leather-wrapped steering wheel, and electric air conditioning. Outside, the i-MiEV sports alloy wheels, fog lights, and heated side mirrors. Options include a USB port for connection to an iPod and a navigation and entertainment system with Bluetooth compatibility.

Concerning safety, the IIHS has not performed the standard testing on the i-MiEV and is not likely to, as they set a minimum standard for annual sales (normally). Encouraging videos of European tests may help those wavering. For comparison, the Toyota Prius Plug-In hybrid electric vehicle has earned the highest possible safety test score any vehicle can, the Top Safety Pick Plus rating for 2015.

The Mitsubishi i-MiEV was one of the first of the modern EVs when Mitsubishi designed and marketed it in Japan and Europe back in 2008. Rather than coming from a converted gasoline engine vehicle, the i-MiEV was converted from a Japanese Kei car, a smaller-than-compact car specifically built for that island nation’s need for compact vehicles. This may ultimately have been its fatal flaw. The i-MiEV seems to embody the “too-small, too-slow, range-limited, and possibly unsafe” stereotypes that EV manufacturers and advocates have slowly been working to dispel. Sales of the i-MiEV have been very, very slow. Rounding up, only 2,000 have ever been sold in the US. The Nissan Leaf, which came to market after the i-MiEV, has sold over 75,000 units.

Regular readers of car magazines may remember that an editor/writer of one of the top magazines bought an i-MiEV for his own personal use in the LA area when it was first introduced in California. His regular, frequent, and very positive reports about the car were sustenance to the many EV enthusiasts looking for some validation that small, very low-performance EVs could make it in America’s unique marketplace. It would be accurate to say that the i-MiEV received more than fair coverage from the media.

What's your take on the 2016 Mitsubishi i-MiEV?

Have you driven a 2016 Mitsubishi i-MiEV?
Rank This Car