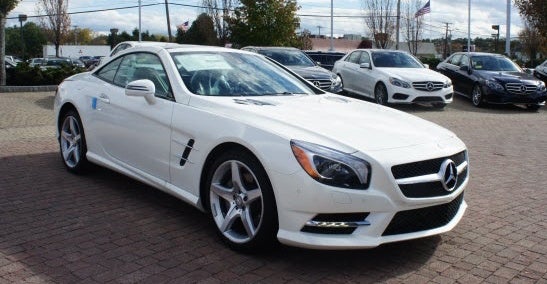 For many years, the Mercedes SL has been more of a blend of comfort and performance than an actual sports car, with, of course, the option of top-down motoring when the weather permits. There’s certainly a market for such a car (which Mercedes calls the “S-Class of sport cars”), and the company has stuck with the same basic principles it established with the W113 “Pagoda” SLs in the early 1960s. The current model came out in 2012 and remains largely the same for the upcoming year, with four available submodels that range widely in price largely because of their very different drivetrains but also thanks to some of the extra luxury goodies on the higher trims.

The base SL400 starts at $85,050. The SL is more of a convertible grand touring car than a sports car, and the SL400 does lag behind in the speed department when compared to other more dedicated performance cars in its price range. But it’s no slouch, either, with a 0-60 mph time of 5.1 seconds thanks to a 329-hp 3.0-liter twin-turbo V6. The next step up--to the SL550--means a big jump in price, but it also means a lot more grunt under the hood. The SL550 starts at $108,050 and is powered by a 4.7-liter twin-turbo V8 that produces 449 hp. It also adds an active parking system, a rear view camera, and ventilated seats.

The step up from the SL550 is an even bigger price hike, but it does get you an SL tweaked by Mercedes’ in-house tuner, AMG. The SL63 AMG starts at $149,700 and comes with bigger brakes, a limited slip differential, sport suspension, and carbon fiber trim in the interior. Its 5.5-liter twin-turbo V8 makes 577 hp, allowing the car to do 0-60 in 3.9 seconds and reach a top speed of 189 mph (other models are limited to 130 mph). The top model for 2016 is the SL65 AMG, which costs almost two and a half times the base SL400. It starts at $217,550 and adds a Bang & Olufsen 12-speaker audio system, quad exhaust tips, a rear spoiler, and safety features that include a blind-spot sensor, lane-deviation and parking sensors, and autonomous braking. Under the hood is a monstrous 6.0-liter V12 that makes 621 hp and a tire-shredding, stump-pulling 738 lb-ft of torque. Interestingly, the V12-powered car isn’t all that much quicker than the SL63 AMG, despite a price premium of nearly $70,000, and it apparently handles a bit worse thanks to that gigantic motor sitting out front--so the V8 AMG is arguably a better buy.

All of the SLs come with a 7-speed automatic gearbox, and fuel economy ranges from an admirable 27 mpg on the highway for the SL400 to just 21 for the monstrous V12 SL65 AMG. The SL's electric-assisted power steering is perfectly adequate for cruising and casual blasts through the countryside, but someone accustomed to models like the 911 or BMW M cars would likely criticize it for a lack of feedback. There is a standard multi-link suspension with two-mode adjustable shocks, but Mercedes’ Active Body Control active suspension and torque vectoring are available as extras.

Comfort is just as important as speed with the SL, and the 12-way adjustable seats are both wide and pleasant, even featuring standard neck vents. A seven-inch display screen dominates the dashboard, and includes web browsing with Google search capability and a DVD changer. One notable option is Mercedes’ “Magic Sky Control”, which darkens the glass portion of the folding hardtop in bright sunlight, not unlike those Transitions sunglasses. Cargo space isn’t ideal in the 2016 SL, especially with the roof folded down, but it’s more than adequate for a two-seater convertible and will pass the golf club test.

The 2016 SL remains true to its roots as a half sports, half luxury car, and even has the grunt and advanced suspension for genuinely exhilarating performance, most noticeably in the AMG-equipped cars, but in the lower end models too. People who take their driving more seriously will continue to buy Porsches and Corvettes, but those looking for refined motoring will stick with the SL.

What's your take on the 2016 Mercedes-Benz SL-Class?

Users ranked 2016 Mercedes-Benz SL-Class against other cars which they drove/owned. Each ranking was based on 9 categories. Here is the summary of top rankings.

Have you driven a 2016 Mercedes-Benz SL-Class?
Rank This Car

Why Has My Buyer Not Received Anything From Cargurus?

I started the selling process but my buyer has not received anything?

The buyer and I want to have carguruspay facilitate a wire transfer so he can have the car shipped.

202 views with 5 answers (last answer about a year ago)

Is It Advisable To Buy Prepaid Maintenance & Wheel And Tire Warranty While...