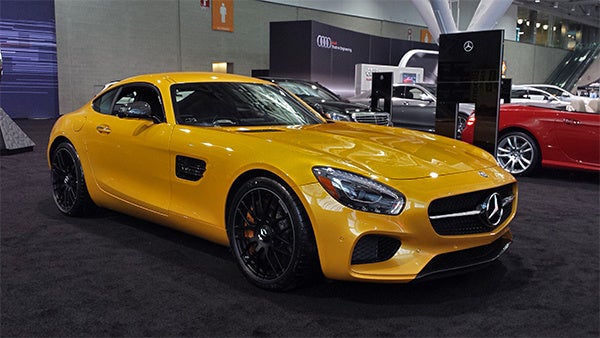 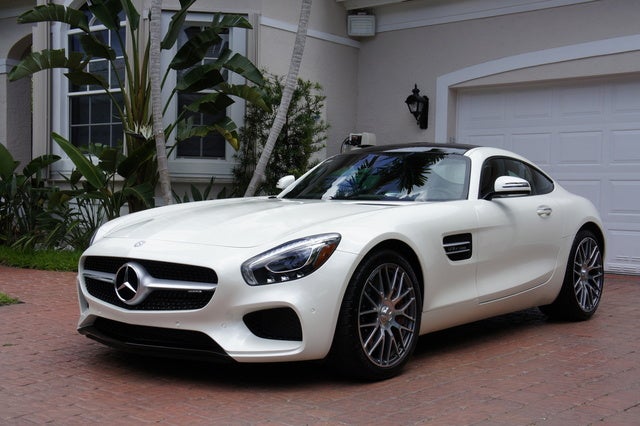 In a world of generic sedans and suburban-ready SUVs and crossovers, the Mercedes-Benz AMG GT sports car, which makes its debut for the 2016 model year, truly stands out from the crowd. At the same time, it might look familiar to fans of Porsche's 911, since the AMG GT was clearly designed and positioned by Mercedes as a 911 competitor. It also draws inspiration from the iconic Mercedes-Benz 300GL Gullwing of the 1950s, as well as from classic Corvettes of the same era. Not a bad pedigree.

Based on the AMG-developed SLS-Class AMG GT Coupe and Roadster, which ended production in mid-2014, the new AMG GT features a number of upgrades and changes that differentiate it from its predecessor. The gullwing doors are gone, for instance, and the automaker replaces the SLS's 6.3-liter, 583-hp V8 engine with a new hand-built AMG 4.0-liter, 503-hp twin-turbocharged V8. Although less powerful than its predecessor by 80 hp, it cranks out the same torque, at 479 lb-ft, with more at the lower end. It's also lighter, helping the new AMG GT shed about 109 pounds overall. Other upgrades include improved hydraulic steering for better handling, a slimmer body, a larger trunk, and a wider range of options, as well as a lower price tag than the car it replaces.

Outside, the AMG GT displays a truly unique look guaranteed to turn heads. The long, aggressive nose, with its pronounced powerdomes and distinctive three-dimensional grille, stretches nearly halfway back the car's body length, eventually giving way to a bubble-like cabin, which sits far back on the chassis. Slanted LED high-performance headlights, large air scoops up front, and big wheel wells give it a muscular look. Stylized LED eyebrows above the headlights double as daytime running lights. The frameless doors ensure clean lines from front to back, while integrated exhaust pipes, narrow LED taillights, and an electronically retractable rear spoiler add to the car's design mystique. Other standard exterior features for the GT S trim include 19-inch wheels in the front and 20-inch wheels in the back, auto-dimming mirrors, and a power-operated trunk lid.

The AMG GT sits close to the ground, which lowers its center of gravity and helps improve handling, especially in tight corners at higher speeds. A front midengine design, which places the V8 behind the front axle and closer to the center of the vehicle, results in an overall weight distribution ratio of 47/53 front to back. To ensure strength and rigidity while reducing weight, the GT's high-tech body makes extensive use of an aluminum alloy, while the trunk lid is made of steel. Mercedes notes that the body shell itself weighs only 509 pounds, a benchmark for the segment. The design results in optimal performance, agility, and driving dynamics.

Designed specifically for the AMG GT, the new V8 was inspired by the CLA45 AMG's 2.0-liter 4-cylinder turbo powerplant. Like that engine, the V8 features two turbochargers positioned inside the V configuration (termed "hot inside V"), rather than outside the cylinder banks, a first for a sports car engine, Mercedes notes. The design not only makes for a more compact engine, but provides optimal response from the turbochargers, as well as lower emissions thanks to improved air flow. Also a first, the new V8 features a dry sump lubrication system, which allows the engine to be installed lower in the chassis and ensures oil supply during periods of high lateral forces. Fuel-economy numbers for the new V8 check in at 16/22 mpg city/highway, which improves on the SLS's numbers of 13/17 mpg.

A 7-speed dual-clutch AMG transmission channels the V8's power to the rear wheels. Thanks to a larger gear-ratio spread than its predecessor, it provides optimal torque throughout the power range. AMG also modified the GT's steering-wheel-mounted paddle shifters for quicker response times. The GT's drivetrain features an electronically controlled differential and rear transaxle configuration, which mimics the system used in the SLS. It improves overall traction, especially in tight corners at high speeds. A standard Dynamic Select system includes Comfort, Sport, and Sport Plus settings, as well as a new Individual ("I") setting, so drivers can dial in specific settings depending on road surfaces and individual preferences for ride comfort, driving dynamics, noise level, and fuel consumption. Drivers can also choose a "Race" drive program, which optimizes shift speeds for racetrack driving.

To match all that power and performance, the AMG GT needs big brakes, and it gets them, in the form of perforated 15.4-inch disc brakes in the front with 14.2-inch brakes in the rear. Red brake calipers provide a distinctive exterior look. An AMG Ride Control sports suspension with electronically controlled damping comes standard, along with a high-performance AMG exhaust system, which includes fully variable exhaust vanes, so drivers can vary the engine sound using the Dynamic Select system. An AMG Drive Unit enables the driver to control the exhaust vanes directly via a separate button. By the way, the AMG GT features a unique exhaust note designed to distinguish it from other high-performance cars. For even better braking and handling, owners can opt for carbon-ceramic brakes and a performance-oriented suspension system.

Inside the AMG GT, as expected, owners will find a world-class cabin, with the right combination of sportiness and luxury. The center stack and wide, arched center console dominate the interior, while aviation influences are everywhere, especially in the design of the dash and air vents. An 8-inch color display sits in the center of the dash, with controls for the COMAND infotainment system and AMG Drive Unit, including the Start/Stop button, within easy reach of the driver in the center console. A Nappa leather-wrapped sports steering wheel comes standard, along with navigation, a rear-view camera, a 10-speaker Burmester audio system, HD Radio, and the automaker's Parktronic system.

Owners can opt for a variety of interior trim packages, including silver chrome, matte carbon fiber, high-gloss carbon fiber, black diamond, and matte silver fiberglass. The seats are well-bolstered, though some testers find the padding a little too thin for long-distance travel. The long hood and thick A-pillars can limit outward visibility, they also note. Cargo space of 12.4 cubic feet improves on the SLS's, though doesn't quite match that of the 911. Owners can opt for such upgrades as leather upholstery, a Lane Tracking system with blind-spot monitoring, heated sport seats, memory settings, and an upgraded steering wheel and audio system.

Mercedes designed the AMG GT to be easier to handle and more driver-friendly than the SLS, and testers say the automaker succeeded on that account. The GT delivers a smooth ride and superior handling, with excessive amounts of acceleration and a true sports car feel. The transmission shifts quickly and fluidly, with the option to shift manually, and the adjustable exhaust note gives the car a unique character. Some testers say headroom in the cabin might be tight for taller drivers and wish the seats had more padding for long-distance travel, but overall the AMG GT hits all the right notes, whether tooling around the track or serving as a daily driver.

What's your take on the 2016 Mercedes-Benz AMG GT?

Have you driven a 2016 Mercedes-Benz AMG GT?
Rank This Car

i have a s430 benz sometimes my car rises n then it dont ..someone said its my hose cylinder that has a leak is that true

How Long Does The Sale Process Take?

I accepted an offer on my car and started the sale a couple of days ago. I have not heard anything since and I just wondered what was happening?

Will Mercedes Consider An Exterior Colour For An New AMG S GT That Is Not I...

Can I Have Ambient Lights In The Amg Gts . Just Like S Class With More Then...