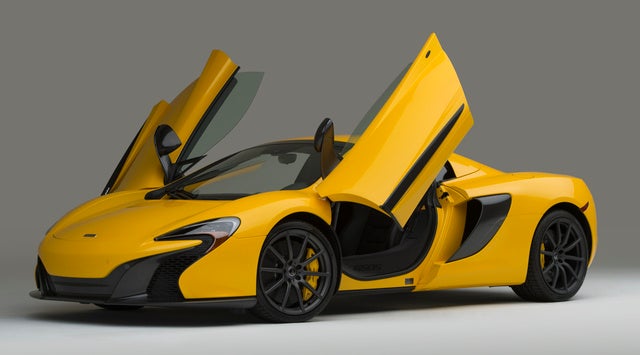 Racing-team-turned-supercar-manufacturer McLaren has sure been busy, consistently introducing and selling new models all around the globe. The 650S is the car that replaced McLaren’s first volume production model, called the MP4-12C, in 2014, although the 650S does share most of its predecessor's components. Since the 650S is fairly new, and since McLaren has introduced several new models over the past two years, the 2016 650S is basically just a mid-cycle refresh--but it’s still a competent supercar, and it represents a better value than last year’s model. Many features that were previously optional will now come standard, including a carbon fiber splitter, rocker panel extensions, side intakes, rear bumper and mirror caps, and an interior package with carbon fiber trim and larger racing seats. McLaren claims this all adds up to over $20,000 worth of additional standard equipment over last year’s model, and although it’s important to note that the 650S Coupe and Spider see respective price hikes of $4,400 and $4,675 for 2016, both are still relatively good deals for their segment.

The 2016 650S also gets a package with a front-axle lift system for going up steep driveways and speed bumps, an electronically adjustable steering column, power seats, a Meridian sound system, a backup camera, parking sensors, and a premium car cover. This package, though, does not come for free: It’s $9,950. Another, less pricey option for 2016 is McLaren’s Track Telemetry mobile app, at $2,830, which reads the car’s onboard sensors and GPS to calculate lap times and driving dynamics such as speed or the g-forces experienced through corners.

No changes have been made to the 650S's powertrain for 2016, as it didn't really need them. It still uses the same incredibly potent twin-turbocharged 3.8-liter V8 that shows up across the entire McLaren range, and in the 650S it makes 641 hp and 500 lb-ft of torque, driving the rear wheels via a 7-speed dual clutch automatic with paddle shifters. Going from 0 to 60 mph takes a bit under 3 seconds. Fuel economy is an unimpressive but not terrible 16 mpg city/22 highway, and the twin-turbo V8 requires premium fuel.

As a 3,250-pound car with lots of real, usable downforce, the 650S is lively around the corners and savage in a straight line. But while it’s capable of pulling hard around a bend and stopping on a dime thanks to the tail air brake, the 650S does not feel like an over-engineered featherweight track car that’s just downright scary to drive. It has actually been praised for its civility and usability, and is very much oriented towards the kind of buyer who wants a supercar capable of everyday use, not just weekend blasts down the coast or the occasional track day. Its three driving modes (normal, sport, and track) tune the handling, transmission, and throttle response to enhance both easy everyday driving and quick runs, and the above-mentioned front-axle lift makes the car just a little more practical for the city. Those who take their driving really seriously can choose a set of super-sticky Pirelli P Zero Trofeo R tires for $1,300.

Just as the 650S doesn’t drive like a track-day-only car, it isn’t appointed like one either. Although the interior is purposeful and certainly looks every bit the cockpit of a performance car (including ample carbon fiber), there’s also lots of suede, a big infotainment screen set in the center of the dash, and good front and side visibility. Visibility out of the rear is less than great, however, given the 650S is a mid-engined sports car. As for the 650S Spider, its hard roof is electronically operated and the two sections fold down to stow behind the seats.

The 2016 McLaren 650S costs over a quarter million dollars, so we can’t expect much in the way of crash test results. Safety features are pretty much limited to stability and traction control, and front, side, and knee airbags. A convenience package does add a reverse camera and parking sensors, but that’s about it. Of course, safety isn’t why you buy a car such as the 650S. It’s more a car for thrills and to look good in, be it at a track day or when you show up at a swanky cocktail party. Again, as a fairly new model, changes for the current 650S have been minimal, but it is nevertheless a thoroughly modern (and tempting) alternative to offerings from Lamborghini and Ferrari.