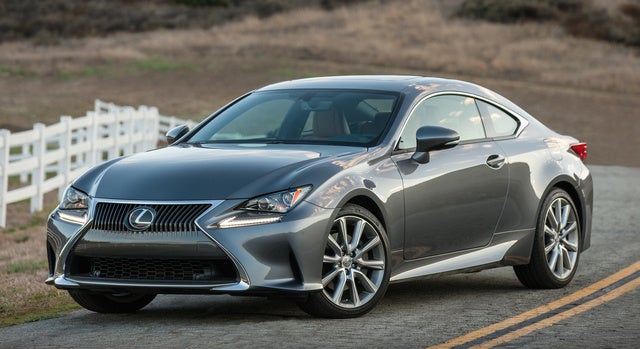 The automotive marketplace is expanding in new and exciting ways. From luxury crossovers to high-performance hatchbacks, pretty much anything is on the table these days. But sometimes we still yearn for classics like the personal luxury coupe. And that is where cars like the Lexus RC 300 come in, bringing the timeless notion of a personal upscale daily driver to a vehicle with cutting edge technology and styling.

For the past few years, Lexus has been leading the charge in avant-garde automotive design. The luxury division of Japanese automaker Toyota has long produced sharp looking vehicles, but its more recent models have shown a new kind of boldness, characterized by the dramatic “spindle” grille and futuristic headlights. But the RC goes further by bucking even the styling norms typically associated with coupes. The lower corners of the rear side windows feature an up-kick that breaks up the general visual profile of the car. And then there are the headlights. They may appear traditionally rakish, but closer examination shows them to two-piece units, with a main headlight section and a boomerang-like LED running light.

The grille expands near the bottom and is flanked by a pair of aerodynamic vents, which are mirrored at the rear of the car. The rear is also marked by integrated chrome exhaust tips and exceptionally unique taillights.

The RC 300's cabin features styling that is destined to age well. The straight lines and crisp angles provide a driver-centricity to the controls and the analog clock in the center is framed by a digital screen above and climate and audio controls below, including touch-sensitive toggles for the dual zone climate control. The crisp digital screen is operated by the Lexus remote touch system, a touch pad located down by the shifter. This allows the driver to scroll through menus on the screen simply by using a finger tip, and this system can be customized to provide varying levels of sensitivity and force feedback.

To the right of the shifter is the Lexus drive mode controller, with Normal, Eco, and Sport S modes. Eco will alter throttle response and shift points for optimal fuel economy, while Sport S and S+ will deliver faster gear changes but hold the gears longer during acceleration. As you might imagine, Normal delivers the best combination of performance and efficiency. Fuel economy for the RC 300 is 19 mpg city/26 highway/21 combined.

The RC lineup was conceived to take on the likes of the BMW 4 Series and Mercedes C-Class Coupe, which helps explain the RC 300's good performance. But if you are seeking even more power, the RC 300 F SPORT has you covered. The F SPORT features a host of mechanical and visual upgrades, including exclusive 19-inch wheels, an F SPORT front fascia and grille, high-performance brakes, and a number of upgrades to the interior trim such as a digital instrument cluster inspired by the Lexus LFA supercar. The RC 300 F SPORT also employs Vehicle Dynamics Integrated Management (VDIM), which individually modulates braking and power to each wheel for maximum traction. A “Sport” mode will lessen VDIM intervention so that you can push the car to its mechanical limits on a track.

The RC 300 has impressive standard and optional safety technology. Its available pre-collision system features sensors that can detect a stopped vehicle or other obstruction ahead, warn of the danger, and even intervene and automatically brake if no action is taken. The same sensors power the dynamic radar cruise control, which allows the RC 300 to sense vehicles around it and maintain speed accordingly.

Base MSRP for the 2016 Lexus RC 300 is $42,600. A RC 300 F SPORT model starts at $46,310. The Navigation + Mark Levinson sound system package adds Lexus’s remote touchpad to the infotainment system, as well as premium Surround Sound and 17 speakers (including a subwoofer). This package also includes the Lexus Enform suite, which provides realtime updates for traffic, weather, sports, and even stocks. A well optioned RC 300 F SPORT can cost as much as $50,000.

The Lexus RC 300 is something of a throwback, as you don’t see many personal luxury coupes on the road anymore. But if you seek a daily driver that has bold, forward-looking style and the latest in safety, infotainment, and performance technology, the Lexus RC 300 might be a good choice--and it could even set you apart in your crowded office parking lot.

So my car's bumber got keyed over the winter, lucky it wasnt any other part, but the scratches aren't small enought that my manufacture store is willing to help take care of it. Meaning i gotta tak...