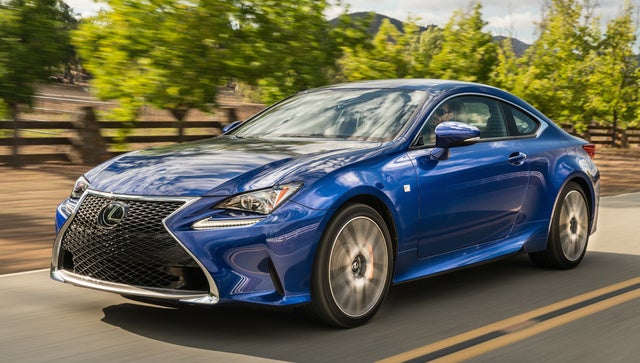 The daily drive to work can be a pretty boring affair, and maybe you've been feeling like you need something to liven it up. That's where the 2016 Lexus RC 200t comes in--a fun and engaging 2-door luxury coupe that will make your daily commute anything but normal.

The RC is basically a coupe version of the venerable Lexus IS compact luxury sedan, and, as such, is long overdue. The RC's overall design also borrows heavily from Lexus' LF-LC and LF-CC concept cars. The first glimpse of the RC lineup was caught at the 2013 Tokyo Motor Show, certain RC models debuted last year, and 2016 is the inaugural year for the RC 200t itself.

The Lexus RC has a slightly shorter wheelbase than the IS, although it's actually longer overall. The result is a dramatically long front hood, as well as a roof and rear window that slope elegantly into the short rear decklid. These aren't exactly unusual characteristics for a contemporary coupe, but further examination proves them to be a little more avant-garde than you'd suppose.

The RC's most prominent exterior feature, however, has to be the bold "spindle" grille, capped on either side by headlights that look rightfully modern (i.e. rakish) at first glance. But when you look a little closer, you realize the headlights are actually two piece units with the LED running lights split off from the rest of the assembly. Moving past the front clip, you see the curving hood, and strong character lines underneath the doors that jut upwards near the back in order to connect to the “kinks” behind the rear window. Out back, the taillights have a unique “boomerang” look to them that's bound to be recognizable to anyone you pass on the highway.

The RC 200t's cabin is an artistic blend of form and function, a bit reminiscent of Frank Lloyd Wright's architecture or a modern art installation. The flow of the armrests and the center console buttresses convey speed even when the car is at a standstill. The interior feels like a “cockpit” more than anything else. NuLuxe upholstery is standard, with either an aluminum or wood accent panel finish. The two rear seats are rather small, but they split and fold 60/40, allowing you to carry additional cargo on longer trips.

There are also various optional interior upgrades such as the Luxury package, which, for $2,990, adds leather seating, rain sensing windshield wipers, heated and cooled front seats, a heated power tilt-telescoping steering wheel, a blind spot monitoring system with rear cross-traffic alert, and a few other items. There is also a Navigation Package, which costs $1,530 and adds a remote touchpad that lets you scroll the center mounted digital screen, operating the car's navigation and phone functions. This package also adds a CD/DVD player, a voice recognition system, a GPS navigation system, and Lexus Enform, which provides realtime updates for traffic, weather, sports, and stocks.

The RC 200t comes equipped with a turbocharged 2.0-liter inline-4 engine. This is the first turbocharged engine to be developed by Lexus and was first employed in the NX 200t compact crossover. It sends 241 hp and 258 lb-ft of torque through an 8-speed automatic transmission to the rear wheels, and is able to go from 0 to 60 mph in 7.3 seconds on its way to an electronically limited top speed of 143 mph. It will also do a quarter mile in 16 seconds, not bad for a 4-cylinder! Fuel economy for the RC 200t is 22 mpg city/32 highway/26 combined.

Base MSRP for the 2016 Lexus RC 200t is $39,995, making it the most affordable model in the Lexus RC lineup. Start selecting options like the Luxury and Navigation Packages, and the RC 200t will top out north of $45,000, still cheaper than most luxury coupes out there today.

With eye-catching looks, a throaty-yet-efficient turbocharged engine, and the latest available safety and entertainment technology, the Lexus RC 200t will liven up your daily commute in ways you probably didn’t think were possible!