With enhanced smartphone connectivity through Enform, the Lexus NX 300h continues to present a distinctive choice in the hybrid luxury crossover segment. 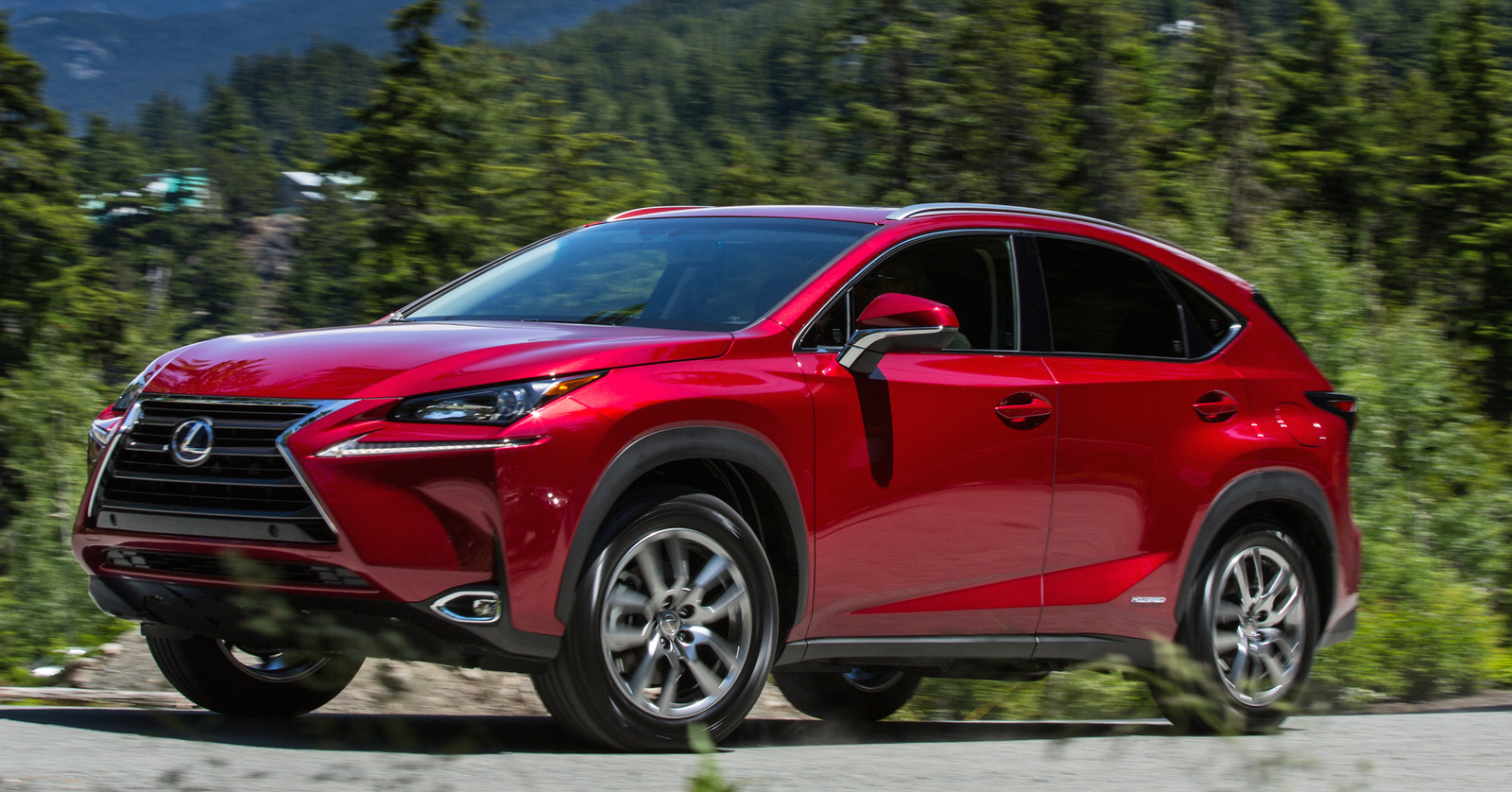 The NX 300h distinguished itself when it hit the scene in 2014 and has proven itself as a bestseller for Lexus. With controversial styling and a hybrid drivetrain, it manages to stand out in a very sparse segment, ostensibly competing with only the Audi Q5 Hybrid. But pokey acceleration, storage space that places it at the bottom of its class, and a high price point take away from its 5-star safety rating and impressive braking distance. 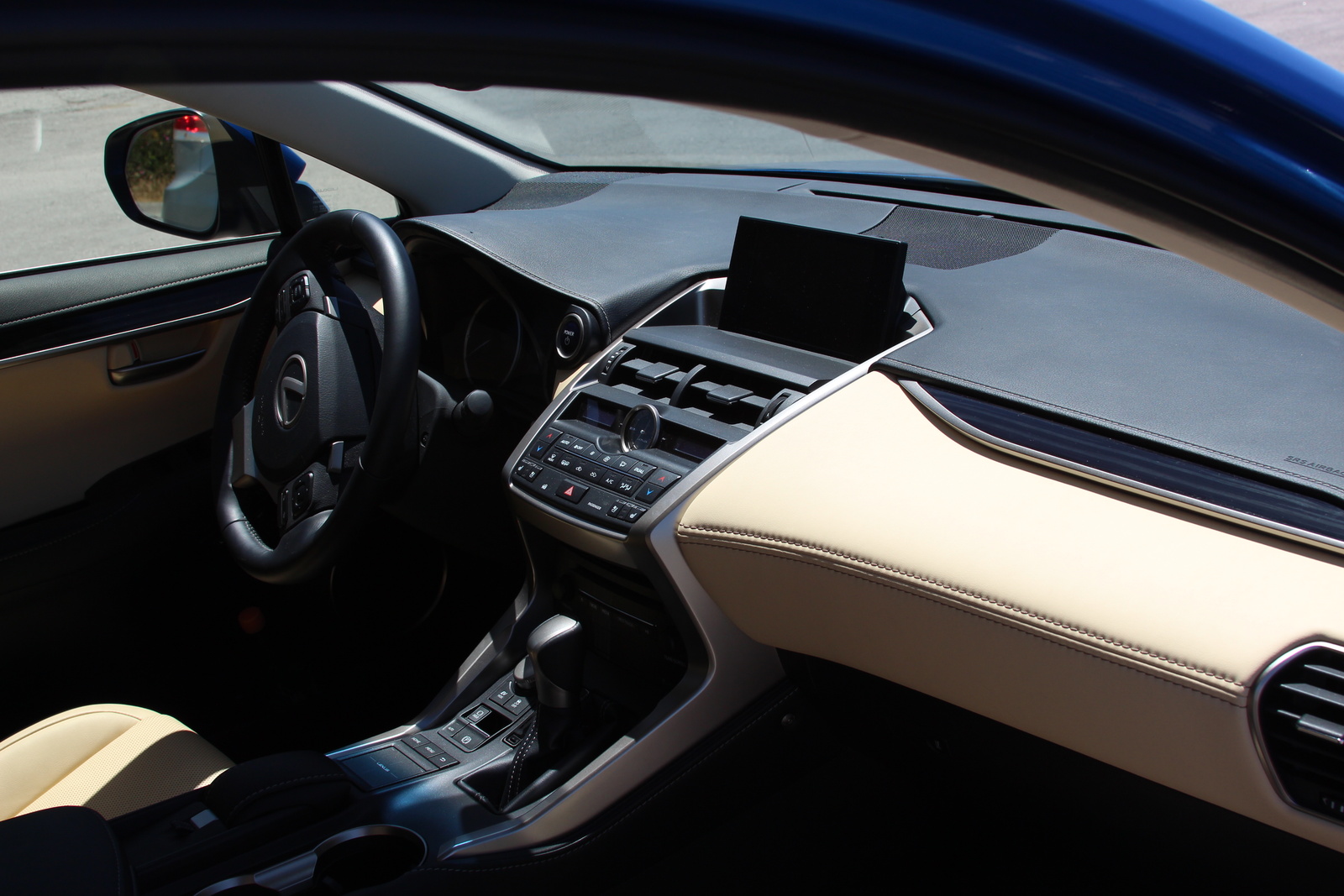 The aggressive styling of Lexus’ latest lineup has divided consumers but undeniably increased sales for all Lexus models. Sharp, angular lines cut across the front, sides, and back of any Lexus on the market today, and the NX 300h is no different. The distinctive front grille has fast become an icon, and the steeply raked hatch, while seriously limiting rear storage, has been a defining feature of nearly all contemporary crossovers.

With a high-quality interior on par with the usual Lexus offerings, the NX is a pleasant place to chew up some miles, presenting controlled if not sporty chassis and design influences inside and out from the IS and RC.

Lexus has done away with confusing additional trim levels here, instead allowing you to trick out your NX through option packages. In base form, the NX comes with standard LEDs across the board, keyless ignition and entry, dual-zone auto climate control, premium vinyl for 8-way power front seats, and a power tilt and telescoping steering wheel. The technology is there as well with a standard 7-inch infotainment screen, rear-view camera, and HD and satellite radio for the 8-speaker system. The Enform suite is also included, allowing you to connect, monitor, and control your NX through your smartphone.

A Premium Package ($2,670) upgrades the wheels to 18-inch alloys and offers enhanced safety features like blind-spot monitoring with cross-traffic alert (a $660 standalone option), but also includes functional additions like auto-dimming side mirrors, heat and ventilation for the front seats, a sunroof, and driver memory. The Luxury Package ($4,505) includes all the Premium items as well as perforated leather upholstery, wood trim, a heated steering wheel, auto wipers, and a power liftgate (a $400 standalone option). That’s a lot of money for a few added features, but it’s required in order to add power recline to the rear seats for an additional $400.

To take advantage of the added smartphone connectivity this year, you’ll have to add the $1,875 Navigation Package, which also adds the often-maligned Remote Touch interface, two additional speakers, and voice control. You can also add options like front and rear parking sensors ($500), adaptive cruise with a pre-collision system with crash mitigation ($900), and Qi wireless charging ($220).

My week with the NX 300h was spent in a front-wheel-drive example with a base MSRP of $39,720, whereas one with all-wheel drive (AWD) would have a starting price of $41,310. It was equipped with the Luxury and Navigation packages, as well as Qi wireless charging, the electrochromatic rear-view mirror, folding rear seats, a blind-spot monitor, and the parking sensors. With a $900 delivery fee, the walkaway price came to $48,945. 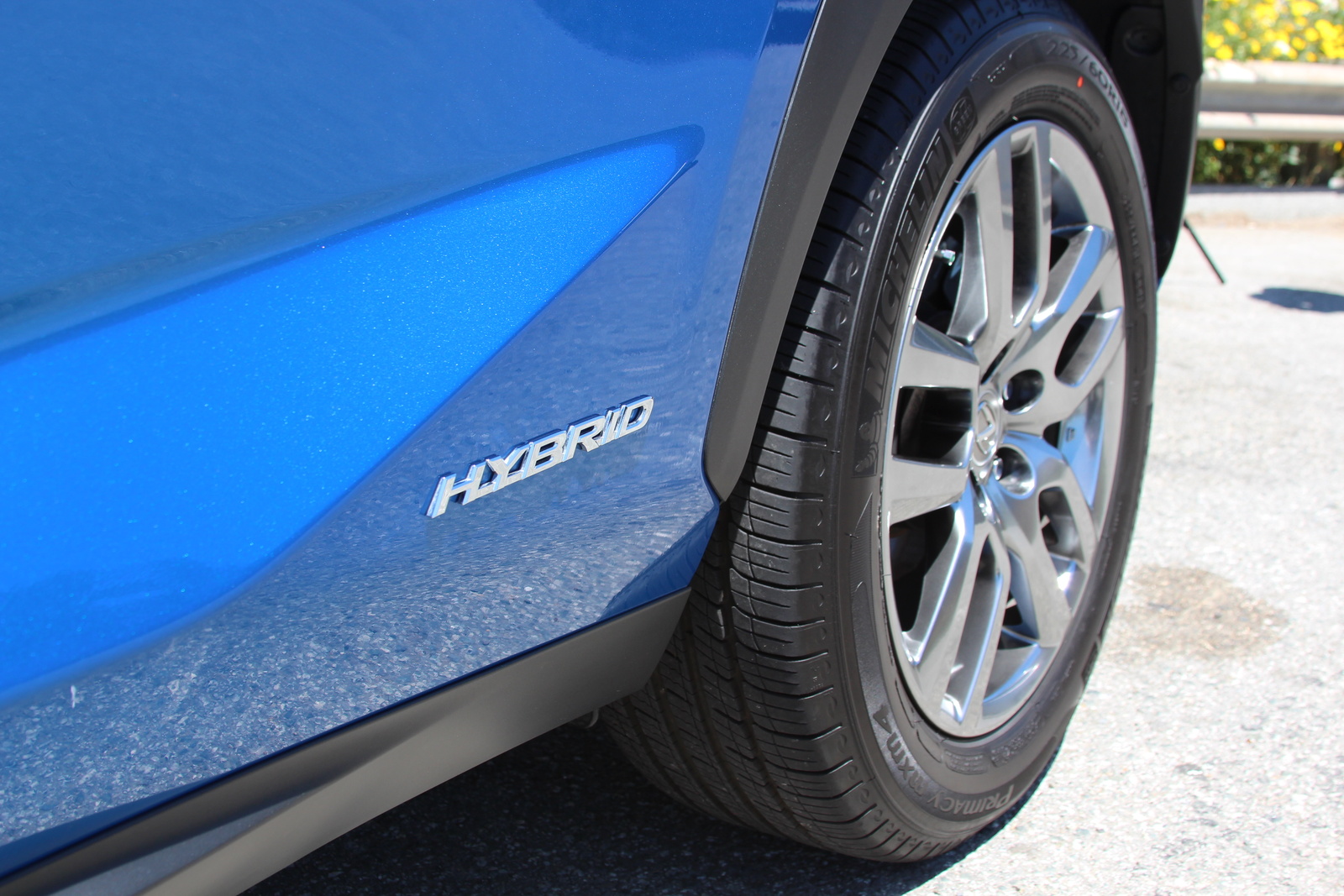 The NX 300h uses a drivetrain familiar to a lot of car buyers, as it’s shared with the Camry Hybrid. Here a 2.5-liter inline 4-cylinder is paired with electric motors, powered by a nickel-metal hydride battery pack, and mitigated via a CVT. That all adds up to an equivalent 194 hp, which simply isn’t enough for the NX 300h’s 4,200-pound curb weight. Despite the added torque from the electric motors, a trip to 60 mph will still take more than 9 seconds, putting the NX 300h near the bottom of its class. Still, it motivates adequately for highway merging and passing, although there’s curiously little observable difference between the Eco and Sport settings.

Economy is another mixed bag, because although EPA estimates put the NX 300h at 35 mpg city/31 highway for a combined rating of 33, my week of driving came back with a combined average of just over 24 mpg. Considering the NX 300h boasts class-best fuel economy, this is particularly hard to swallow. At the other end of the equation, the NX 300h puts out an EPA-estimated 276 grams of carbon dioxide per mile, earning it an 8-out-of-10 smog rating, which is 20% better than the Audi Q5's. 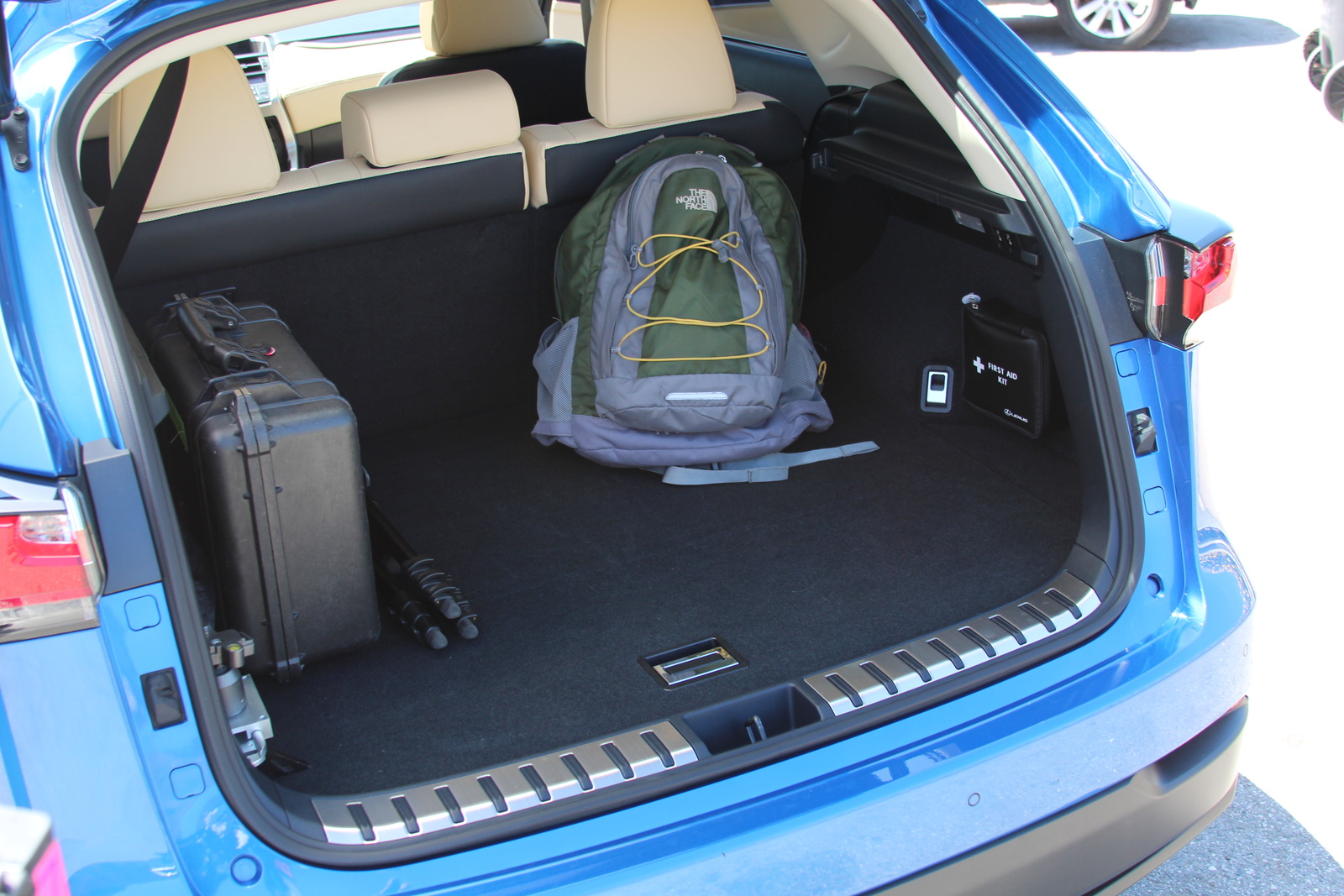 It’s no secret that the form of most recent Lexus models has caused a lot of controversy, making it perhaps the most contentious lineup on the market today. But these issues are limited to the exterior, as no one seems to want to complain about Lexus interiors. With unique features like the now-iconic analog clock dead center in the dash and a wealth of high-quality trim pieces like brushed aluminum and black wood trim, the NX 300h manages to gracefully balance between sport and luxury, with equal bits of IS and RC showing through. More than that, everything is well-placed and attractive, although two-tone leather is supplemented by matching hard plastic, which takes away from some of the ambiance.

The suspension is surprisingly agile and composed, but not sporty by any means—there are F Sport trims if that’s your style—and it still manages to soak up bumps and road inconsistencies without an abundance of drama. There's the usual immediate insulated crash that comes with most hybrids, but it would be unfair to expect more, saddled as it is with the extra weight of all those batteries.

Interior space is another sore spot here, and while I found the NX 300h to offer plenty of room for my 6-foot, 4-inch frame in front and back seats, rear storage of 16.8 cubic feet with the rear seats up and 53.7 with them folded flat is the worst in the class, thanks again to that aggressively angled rear hatch. 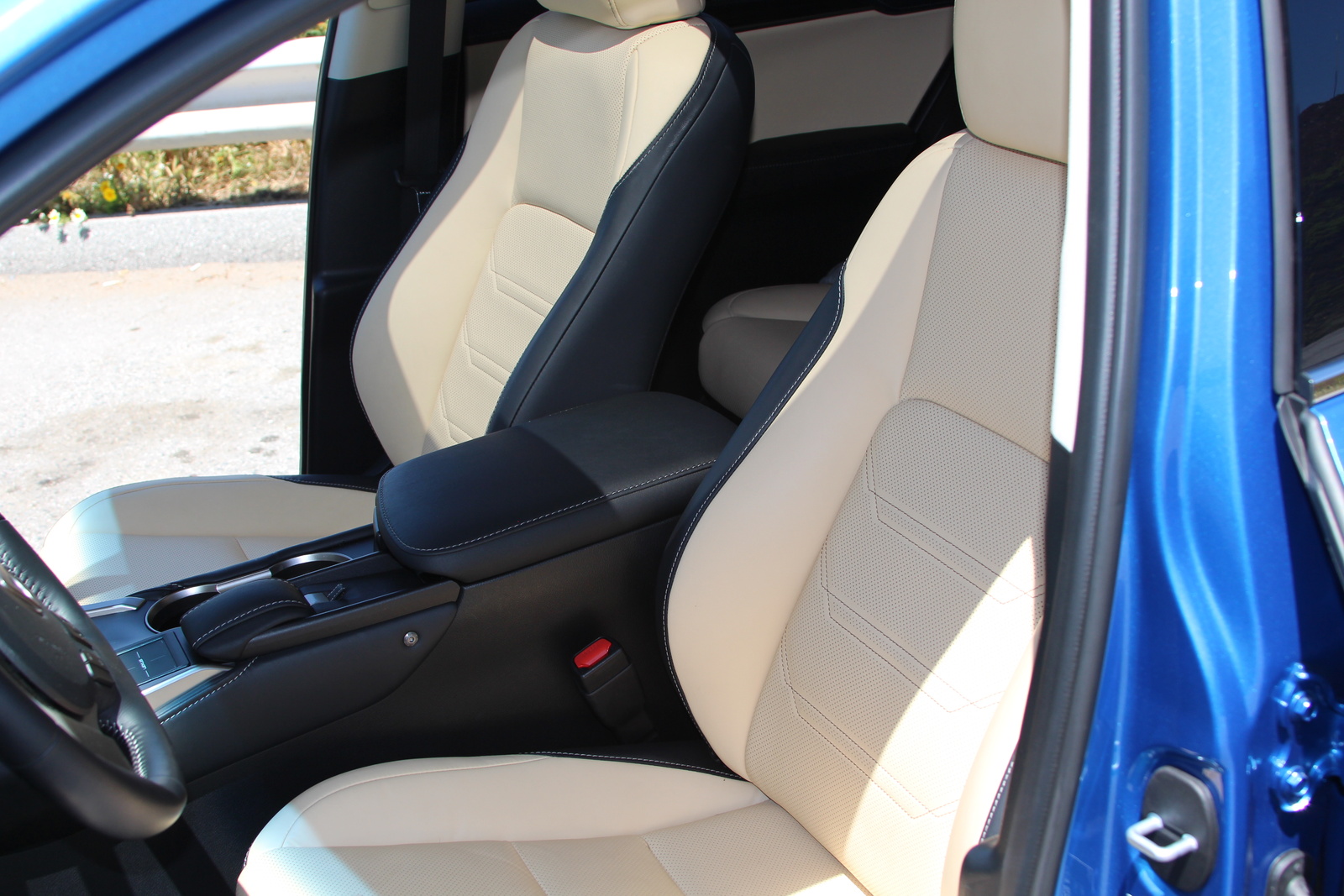 Without one of the available option packages, technology in the NX 300h is limited to LED lighting, keyless entry and ignition, dual-zone climate control, and the standard 7-inch infotainment screen for the rear-view camera. You also get standard HD and satellite radio. Piling on additional tech is an expensive endeavor, even if you don’t want to go for the $2,670 Premium Package or the $1,875 Navigation Package for the blind-spot monitoring with cross-traffic and driver memory system or the Navigation system with Remote Touch and voice control.

For me personally, the navigation system and Remote Touch interface aren’t worth the extra money. The search feature in the nav sent me to more incorrect listings than correct ones over the course of the week, and I’ve never felt comfortable enough with the Remote Touch interface to use it while driving, despite testing several Lexus offerings with the system over the last few years. The controller is imprecise and difficult to control, even when a car is stationary. Were it not a forced pairing with the Performance or Luxury Package, I’d choose to leave it off altogether.

Standalone options include the $500 front and rear parking sensors, the $900 adaptive cruise with a pre-collision system with crash mitigation, and the Qi wireless charging system for $220. Given the limited rear visibility here, the parking sensors aren’t the worst option you could add, but I simply cannot recommend the Qi wireless charging. Ignoring the fact that you can buy your own Qi charging station for less than $20, I tested three different Qi-equipped phones, and not one actually fit in the charging dock without preventing the lid on the center console from closing. 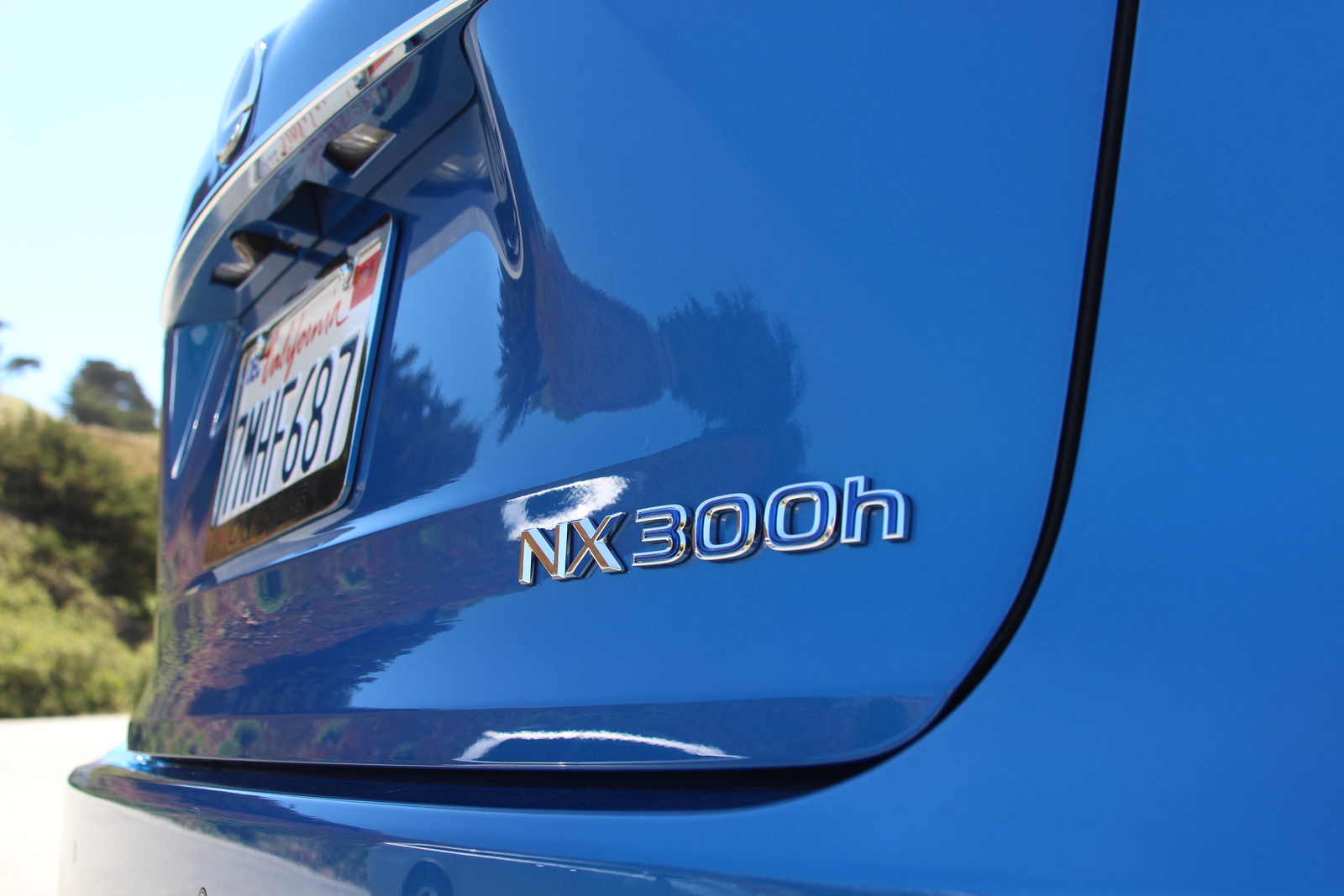 If there’s one area in which the NX 300h excels, safety is it. While in base form the 300h has earned a 5-star overall rating from the National Highway Traffic Safety Administration, adding the optional forward collision prevention system makes it a Top Safety Pick for the Insurance Institute for Highway Safety. This is thanks to the standard antilock disc brakes, traction and stability control, and a full suite of airbags including front-side, full-length curtain-side, driver knee, and front passenger cushion airbags. And don’t forget the NX 300h's 60-0 braking distance, which stands at an impressive 118 feet. 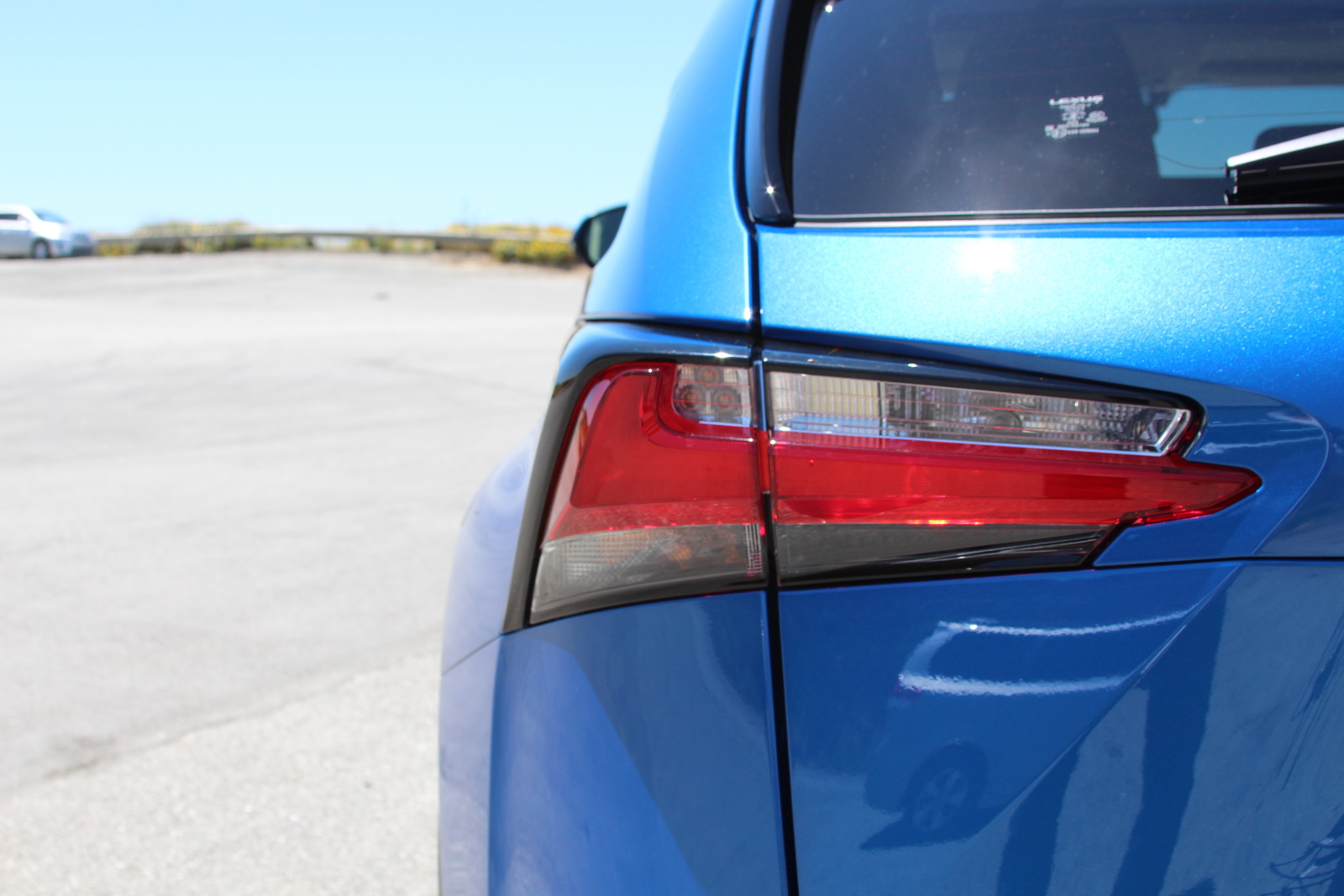 Given that the only other option in the segment is the Audi Q5 Hybrid, whose base MSRP starts at $52,500, the NX 300h is a relative steal. The fact that I was unable to even come close to the EPA's estimated mileage is a sore spot, however, especially when similar numbers could be achieved through judicious driving in an NX 200t at a price about $5,000 lower.

Currently Lexus offers a $1,000 cash bonus promotion through the end of the year for students and military members, as well as a $500 bonus when leasing through Lexus Financial. Lexus reliability has held strong for years, although some of the new tech has seen a dip in the averages. However, as Lexus products tend to hold their value well, this seems a worthwhile risk to take given the large price disparity with the only other available luxury hybrid crossover.

Have you driven a 2016 Lexus NX Hybrid?
Rank This Car