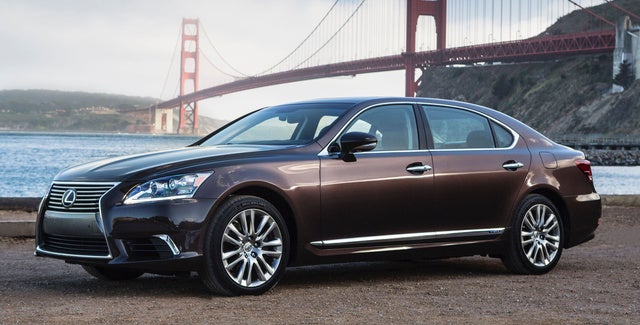 Make no mistake; the 2016 Lexus LS 600h L, flagship of the Toyota-owned Lexus lineup, remains one heck of a nice full-size 4-passenger hybrid sedan. But according to most in the media, its relatively low fuel-efficiency numbers do not justify its high MSRP. That said, however, the LS 600h L comes loaded with enough comfort to satisfy almost any luxury car buyer.

The 2016 LS 600h L returns available in only a single trim, with full-time all-wheel drive (AWD), a limited-slip rear differential, an adjustable touring suspension, and variable gear-ratio steering. It's also built on an extended wheelbase for increased overall length (hence the “L” designation).

There have been a few subtle tweaks for the upcoming year, including extra body adhesive for more rigidity and a pair of new exterior colors: Atomic Silver and Eminent White Pearl. The 2016 LS 600h L gets some upgrades to its Enform multimedia system along with new “enter” and “back” buttons on the system’s remote controller. Lexus’ Enform Service Connect feature is also now available, allowing you to access your vehicle’s health status and service alerts through smartphone apps. There are hints of a major LS redesign for the 2017 model year.

Powering the 2016 LS 600h L is a 5.0-liter V8 engine that mates with a pair of electric motors for 438 total hp and 385 lb-ft of torque, all managed by a continuously variable transmission (CVT) with an 8-speed manual shifting feature. This powertrain is interfaced with a nickel-metal hydride battery that is recharged by both the V8 engine and regenerative braking. Mileage numbers, unfortunately, return at a pretty dismal 19 mpg city/23 highway/20 combined, which aren’t a whole lot better than this hybrid’s normally powered LS 460 cousin. Of course, the LS 460 doesn’t come with standard Brembo brakes, a standard adaptable suspension system, or the standard limited slip differential. Furthermore, the upcoming year’s LS 600h L again sports 3 driver-selectable modes: Normal, Eco, and Sport S, able to adjust throttle response and shift points to youy driving mood. Beware, however, that a 0-60 time of 6.4 seconds won’t win this hybrid many battles off the line.

As for features: On the outside, look for 19-inch alloy wheels, a power sunroof, and heated reverse-tilt mirrors. Inside, you'll find leather upholstery, heated power-adjustable front seats, full power accessories, and memory for driver settings. Cruise control and telescoping tilt-wheel steering also return as standard equipment, along with a remote garage door opener, front and rear parking sensors, and a rear-view camera.

The Executive Class Seating package, featuring rear seating for 2, a massaging right rear seat, an ottoman, a cooled center storage compartment, memory for the rear-seat settings, and rear-seat DVD entertainment, is also standard in the LS 600h L for 2016. Improved Bluetooth-integrated Enform infotainment technology is again interfaced with a 12.3-inch display and features GPS navigation. For entertainment there is a 450-watt Mark Levinson premium audio system with a CD/MP3 player, 19 Surround Sound speakers, satellite radio, a video monitor, and an auxiliary audio input.

No crash-test data is available from the National Highway Traffic Safety Administration (NHTSA), but the Insurance Institute for Highway Safety gives the LS 600h L its highest score of Good in all crashworthiness testing.

The 2016 LS 600h L is again challenged by Porsche’s plug-in Panamera S E-Hybrid, BMW’s ActiveHybrid 7, Audi’s Turbodiesel A8, and Tesla’s all-electric Model S, each of which beats the Lexus in fuel economy and is generally regarded to equal it in most other respects.

OliHa I agree that the LS 600h L will remain one of the best cars ever made! It’s very unfortunate that it was discontinued, and not replaced with an even more advanced and more powerful, and yet more fuel efficient model! I’ll always worship this car!