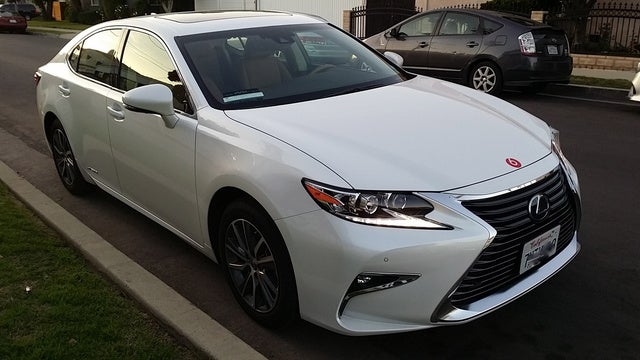 Those looking for a plush commute without excessive fuel usage and emissions anxiety might want to check out the 2016 Lexus ES 300h midsize entry-level-luxury hybrid sedan. This 5-passenger 4-door offers all the passenger room, perks, and driving style of its fellow V6 ES 350 model, but without the carbon footprint and the added fuel stops. The ES 300h even offers a number of upgrades for the upcoming model year.

Available only in a single Base trim, the 2016 ES 300h comes with front-wheel-drive (FWD) and remains one of the roomier midsize premium commuters on the market. One major difference between the ES 300h and ES 350, however, is in trunk space. Carrying its standard rear-mounted nickel-metal hydride battery pack, the hybrid ES offers only 12.1 cubic feet of cargo capacity, compared to an extra 3.3 cubic feet in the ES 350.

At any rate, though, the 2016 ES 300h arrives with a larger grille, improved cabin sound insulation, bi-LED headlights (low beams only), a new steering wheel and upgraded shift knob, and a few additional interior fabric hues. Also new for the 2016 ES 300h is the Lexus Safety System +, which now boasts pre-collision braking and pedestrian-detection technology along with lane-departure alerts, intelligent high-beam control, and adaptive cruise control. An improved Enform Service Connect function provides smartphone apps that alert owners to vehicle maintenance and servicing issues. And a couple of extra buttons appear on the Remote Touch Interface controller when the optional GPS navigation system is installed--although be advised that reviewers remain wary of its ease of use even after this small upgrade.

Powering the 2016 ES 300h is a 156-hp 2.5-liter Atkinson hybrid inline 4-cylinder (I4) gasoline engine that mates with an electric motor to put out a total of 200 hp. A continuously variable transmission (CVT), itself essentially another electric motor, offers instant torque, but its actual torque numbers remain unavailable. Regenerative braking and the I4 both provide a constant charge, allowing the ES 300h to cruise on all-electric power for an unspecified distance, which, of course, contributes to an impressive 40 mpg city/39 highway/40 combined. Three driver-selectable cruising modes, Eco/Normal, EV only, and Sport, allow you to tailor your drive to your mood and fuel budget.

Being a Lexus, the 2016 ES 300h lives up to a certain standard of luxury. Returning appearance features include 17-inch alloy wheels, LED headlights and taillights, a power sunroof, heated power-adjustable mirrors with memory for driver settings, and a rear spoiler that distinguishes the hybrid from its more pedestrian ES 350 sibling. Interior features include leatherette upholstery, power-adjustable front seats, and full power accessories. Cruise control and telescoping tilt-wheel steering also remain standard, along with a remote garage door opener, a rear-view camera, and dual-zone automatic climate control.

I want to buy this car. How much is a great price?