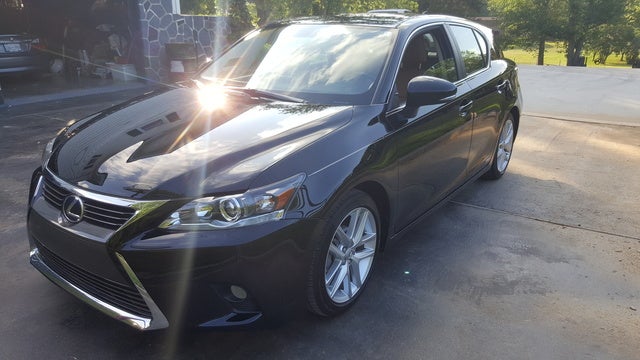 The Lexus CT 200h may be the least-reported-on green car in America. But despite its low media profile, it remains one of the top-selling green cars in the U.S. market, outpacing the Volt, Leaf, and BMW i3 for the current sales year. The 2016 Lexus CT 200h hybrid also comes to market boasting the highest fuel economy of any luxury hybrid. Topping that off is the highest possible safety rating in America, something very few green cars offer. Changes to the CT 200h for 2016 are mostly confined to infotainment upgrades.

The 2016 Lexus CT 200h remains a 5-passenger, 5-door hatch, similar in size to the Audi A3 and Mazda3. Like all Lexus cars, the CT 200h was recently restyled for a more aggressive look. The front end now employs the company’s “spindle-grill," which has proven a boon to sales, if also an unpopular choice with some reviewers.

Inside, the 2016 Lexus CT remains more of a premium car than a full-luxury model. Base CTs are well equipped for their price point, but items like leather seating, navigation, and moonroofs remain optional. Like most cars in its segment (compact premium five-doors), the CT uses a pop-up navigation screen rather than one which is integrated into the dash, an unusual setup for a Lexus. Its base trim is overall more of a “Lexus-light;" but, after all, this is reflected in the affordable price.

Reviewers of the CT in past years have noted the car’s sharp handling, comfortable ride, and slow pace. The CT 200h meanders from 0 to 60 mph in 9.8 seconds, but although that is just plain slow by premium car standards, it is not out of pace with the green cars with which the CT 200h competes (a notable exception being the BMW i3, which is much quicker). And the CT can be quite well equipped, an aspect that further separates it from the rest of the affordable green car field.

The 2016 Lexus CT 200h will continue to use the current-generation Toyota Prius drivetrain. This gasoline-hybrid drive generates just 134 hp, but offers good torque from the combination of its engine and electric motors. Like the Prius and most other green cars, the CT uses a constantly variable transmission, for smooth operation, if little excitement. The biggest upsides of the CT's drivetrain are classic Toyota attributes: quality, durability, reliability, and a solid resale value.

Fuel economy ratings for the CT 200h are impressive, with an EPA estimate of 43 mpg city/40 highway/42 combined. The CT also keeps cost per mile low by using regular unleaded fuel. In fact, the CT’s cost per mile for fuel (or energy if fully-electric) is hard to find on another premium vehicle, as are its extremely low 212 grams per mile of CO2 production and its 9 out of 10 score on the EPA smog rating.

Lexus will offer the 2016 Lexus CT 200h in two main trims, staring with the Base, priced at around $32,000. The popular Luxury Package adds power-adjustable, perforated, heated leather seats with memory, a HomeLink garage door opener, and some other minor upgrades for $2,170. The pricey Navigation Package includes navigation, Bluetooth-enabled premium audio, and Lexus Enform telematics capabilities, but buyers can also opt for the $1,925 Display Audio Package with smartphone compatibility--which includes the ability to view your smartphone apps on the car's screen--and many of the other aspects of the Navigation Package. Standalone options include Lexus’s Pre-collision system for $1,500 and a moonroof for $1,110. Buyers seeking a well-equipped 2016 Lexus CT 200h should budget about $38,000.

The alternative trim is the CT 200h F-Sport. Starting at about $36,000, the F-Sport is mostly an appearance package that gives the CT an even more aggressive look, with spoilers and badges. It also includes a sport-tuned suspension. Similar options to the base model apply, and a well-equipped CT F-Sport will have an MSRP approaching $40K.

The Insurance Institute for Highway Safety has awarded the CT 200h its highest possible rating of Top Safety Pick Plus. The CT earned a score of Good on all crash tests, and can be equipped with advanced forward collision prevention. It's very difficult to find a green car at any price point that can match the CT’s safety ratings.

Those buyers looking for a premium compact car with top-notch safety, affordability, and value should give the 2016 Lexus CT 200h serious consideration.

Users ranked 2016 Lexus CT Hybrid against other cars which they drove/owned. Each ranking was based on 9 categories. Here is the summary of top rankings.

Have you driven a 2016 Lexus CT Hybrid?
Rank This Car

How To Get A BEST DEAL Tag On My Listing

How can I get a green BEST DEAL tag to show on my car for sale listing?

Is There A 10 Year Warranty On Tesla Battery In A CT200h?

I understand the Lexus CT200h hybrid has a Tesla battery which is guaranteed for 10 years. I can't find that information in any of the paperwork that came with the car, but a friend who has the same...

254 views with 1 answer (last answer about a year ago)