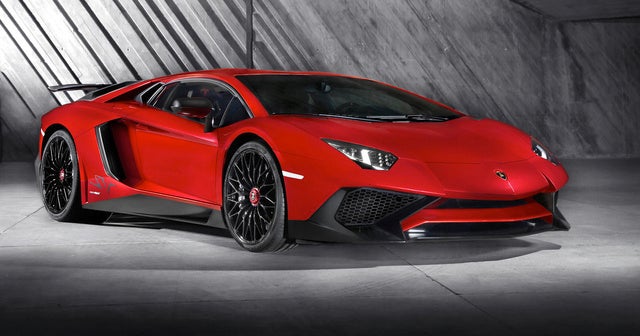 Lamborghini’s flagship Aventador model line enters its final year of sales and production for 2016. The V12, midengine supercar with wild stealth-fighter styling has evolved since its introduction in 2011 and may have reached its pinnacle with the recent launch of the Aventador LP 750-4 Superveloce (SV).

The Aventador is called by Lamborghini “the most sports-oriented, fastest and most emotional series model ever produced by Lamborghini.” In saying that, Lamborghini was referring to its 750-4 SV. The Aventador's lineup consists of three main models: the Aventador 700-4 Coupe, the 700-4 Roadster, and the 750-4 Superveloce, or SV for short. Those Lamborghini model codes can help us a bit. The “700” refers to the nominal 700 hp the 6.5-liter V12 Lamborghini engine develops. The “-4” refers to the all-wheel-drive system added primarily for traction, but which can also aid in handling. In the top trim SV, the engine produces 740 hp, hence the name change. It is also lightened and optimized for speed to do battle with the world’s top handful of vehicles from Bugatti, McLaren, Ferrari, Porsche, and the rest of the gang.

Beginning with the styling, we see that the Aventador is very angular and sharp. Picture it in flat black paint parked next to an F-117 stealth bomber, and you can see where the inspiration came from. You can tell the Aventador from other current Lamborghinis, such as the Huracan, by looking at it from the side. The Huracan, which looks a little like the out-of-production Murcielago, is more smoothly shaped and has just a small vent much lower behind its side door than the Aventador, which looks more like the retired Gallardo.

Yes, the Aventador’s doors go up “Lambo-style.” The company very modestly calls these scissor doors in its publications, but most enthusiasts consider Lamborghini's doors the company's trademark. This car is no poser, though. Rather, it is a midengine 2-seater with incredible capabilities. Zero to 60 mph takes about 2.8 seconds in the Aventador 750-4 SV and just one-tenth of a tick “slower” in the coupe and roadster. Lamborghini lists the top speed on its specification sheet as 217 mph. This has been validated by independent tests that added about 5 mph. Among the supercar or hypercar elite, the Aventador line stands proudly. It entered service and quickly made a big impression on the press and testers as a very civil V12 supercar that could beat the best in the world on a road course. The past 5 years have seen rapid developments in the supercar world, but the Aventador is real-world fast and still competitive.

The driver of the Aventador sits inside a cocoon of carbon fiber. LP-700-4 coupes and roadsters are fitted with owner-selected materials heavy on the leather and modern materials. The SV comes lined with microfiber suede. Lamborghini likes to point out that the SV does not have a navigation system. The soundproofing and some of the trim is gone, too, leaving the carbon fiber bare, as is now the style on many upscale cars. That minimalistic interior lends itself to the pursuit of the lowest possible weight.

The 2016 Lamborghini Aventador will start at about $425,000. Roadsters will be slightly more, and the 750-4 SV will be priced at approximately $550,000. Although these numbers are higher than for some Ferraris and other supercars, they are much lower than some of the cars the Aventador 750-4 SV can match in terms of performance, exclusivity, and visual and audible impact.

When it was launched, Lamborghini indicated that only about 4,000 or so Aventadors would be built. The vehicle’s carbon-fiber molds have a finite life. By the end of 2014, about 3,600 had reportedly been built. Lamborghini says only 600 Aventador 750-4 SVs will be made. So we know that the model line is coming up on its retirement.

Rather than aging, the Aventador seemed to ripen. As of mid-2015, Car and Driver ranked the Aventador 750-4 Superveloce in the top 6 supercars in the world. It is the least expensive vehicle in that grouping and one of the few still for sale new. The Lamborghini Aventador is a present-day icon, and in the future will be remembered as one of the most capable of the company’s many works of art.

What's your take on the 2016 Lamborghini Aventador?

Have you driven a 2016 Lamborghini Aventador?
Rank This Car