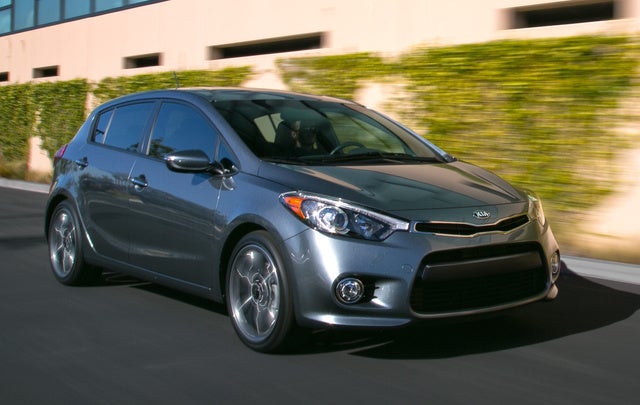 The 2016 Kia Forte5 hits a lot of the right notes, for owners and reviewers alike. Owners like its generous list of standard features, plentiful cargo space, good gas mileage, and sleek Euro exterior design, while reviewers give the Forte5 high marks for its energetic performance, responsive handling, use of quality materials, and overall value. Though it doesn't match the sporty acceleration and nimbleness of its more expensive competitors, the Forte5 ranks near the top of its class, and provides a strong alternative to such class heavyweights as the Ford Focus, Toyota Corolla, Honda Civic, and Mazda MAZDA3.

The Forte5 5-door hatchback is part of the automaker's Forte lineup, which also includes a 4-door sedan and 2-door coupe. Now in the third year of its second generation, the Forte5 adds a new entry-level LX trim for 2016, joining the mid-level EX and the sporty, more powerful SX. Standard equipment for the LX includes remote keyless entry, satellite radio, and Bluetooth, and all three trims get an upgraded audio system and a rear-camera display for 2016. In addition, the EX trim receives 17-inch alloy wheels as standard equipment.

Two different engines power the Forte5 trims, and both provide a good balance of performance, efficiency, and fuel economy. The new LX and the EX come equipped with a 2.0-liter 4-cylinder engine with gasoline direct injection (GDI). It produces 173 hp and 154 lb-ft of torque, and links to a 6-speed automatic transmission in both trims. The transmission includes overdrive and Kia's Sportmatic gear-shifting system, which optimizes efficiency and fuel economy. EPA fuel economy estimates for the Forte5 come in at 25 mpg city/33 highway/28 combined for both trims.

The sporty SX cranks up the power to 201 hp and 195 lb-ft of torque thanks to its turbocharged 1.6-liter 4-cylinder engine, also with GDI. It connects to a 6-speed manual transmission, making for a more spirited ride, although Kia does offer an optional automatic with steering-wheel-mounted paddle shifters. With the manual shifter, the turbocharged powerplant posts fuel economy numbers of 21/29/24.

The front-wheel-drive Forte5 delivers a smooth, competent ride, thanks in part to its unibody structure and high stiffness. But despite its relative stability, the hatchback can exhibit some body lean in tight curves. The base suspension on the LX and EX features MacPherson struts and a stabilizer bar in the front, and a torsion beam and coil springs in the rear. It handles most types of road surfaces with relative ease and delivers a capable ride, especially during daily commutes.

The SX receives an upgraded sport-tuned suspension with a firmer ride, better cornering, and more road feel. Both the EX and SX come equipped with FlexSteer, which enables the driver to vary steering effort by choosing from Comfort, Normal, or Sport settings.

The Forte5 displays a sleek, aggressive exterior profile, with a low stance and roofline, large wheel wells, and minimal overhangs. The deep-mouth grille and wraparound projector-beam headlights up front and angled wraparound taillights in the rear add to its distinctive appearance. All trims get such standard features as dual heated power mirrors with integrated LED signaling and front foglights, the EX adds power-folding side mirrors and LED positioning lights, and the SX also gets dual chrome exhaust tips and upgraded LED foglights.

Inside, owners will find comfortable front and rear seats with plenty of headroom and legroom, as well as smart ergonomics, well-made materials, and good overall build quality. In fact, many reviewers say the Forte5's cabin beats just about anything else in its class. There's also plenty of cargo space, aided by the 60/40-split second-row seat. With this rear seat up, the 5-passenger Forte5 offers 23.2 cubic feet of cargo space, which compares favorably to the Forte Sedan's 14.9 cubic feet and the Forte Koup's even stingier 13.3 cubic feet. Kia has not released cargo space numbers for the Forte5 with the rear seats folded down, but it no doubt exceeds 50 cubic feet.

All Forte5 trims come well-equipped with such standard interior features as a 6-speaker audio system with satellite radio, air conditioning, power door locks, and a tilt/telescopic steering wheel with audio and cruise controls. The EX adds a leather-wrapped steering wheel, a cooling glove box, and a trip computer, as well as a number of options unavailable on the LX, including leather upholstery, heated front seats, a heated steering wheel, and a navigation system. The SX includes such additional standard features as push-button start and metal pedals, as well as exclusive options like a unique instrument cluster and a 10-way power-adjustable driver's seat with ventilation.

The Forte5 received a 5-star safety rating from the National Highway Traffic Safety Administration (NHTSA) and gets good marks for its safety features. Electronic stability control, traction control, hill assist, antilock brakes with brake assist, seat-mounted side airbags, and side curtain airbags are all included in the standard package, and are comparable for the class.

Steven I own a 2016 sx turbo manual 6 spd. It's quick and responsive, and has made driving fun again.

My daughter just bought a car from Carvana, and we are having a variety of issues. Would appreciate any feedback relative to your experience with SilverRock, the company that provides Carvana's war...

Need Help With A Notification Sound On My 2015 Kia Forte5

Just purchased my Kia, and accidentally set off the panic alarm this week. Since then, every time I unlock the car and then start the engine, I get a siren (alarm) sound for about 10 seconds. No l...