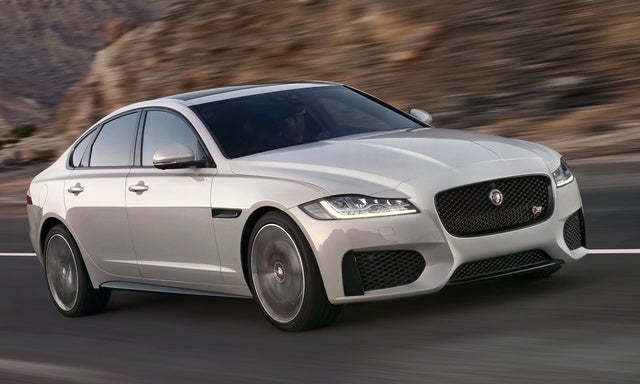 The XF was first introduced as a badly needed replacement for the lackluster S-Type back in 2007, and to show just how revitalized Jaguar has been since the company’s takeover by Tata Motors in 2008, the XF is actually the oldest model in Jaguar’s lineup. The 2016 version is the all-new second-generation model, unveiled to much fanfare at the New York Auto Show earlier this year, which will be available later this year. The redesigned XF came just in time to be slated above Jaguar’s all new XE in the model range. Just as the XE is a BMW 3 Series and Mercedes-Benz C-Class competitor, the XF still remains pitted against the 5 Series and E-Class.

Aside from the styling, which is all around cleaner and more elegant than that of the original XF, Jaguar is making a big deal, and rightly so, about the extensive use of aluminum throughout the new car. Jaguar has more experience working with aluminum than most other large automakers and has used it to great effect in the new XF. The lightweight material is used at many points throughout the monocoque, and the hood, front fenders, one-piece front body sides, and front suspension towers are all aluminum as well.

Aluminum doesn’t rust and makes for significant weight savings over the old car, and significantly improved aerodynamics (a drag coefficient of 0.26 compared to 0.29 for the old car) will make for improvements in fuel economy as well as performance. Specifically, the weight savings amount to 132 pounds for the rear-drive (RWD) version and 265 pounds for the all-wheel-drive (AWD) version. The new XF is also 7mm shorter than the old car overall, but its wheelbase is 51mm longer, giving it additional interior space, which was a weak point with the old car.

The European market gets a range of engine choices, but the U.S. gets the same basic 3.0-liter supercharged V6 from the F-TYPE sports car. We shouldn’t complain, though, because it’s a fantastic powerplant. U.S. buyers do get a choice of tune, as the car can be had with either 340 or 380 hp, with torque fixed at 332 lb-ft. Buyers get the choice of either RWD or AWD, which in the Jaguar is run by a chain-driven system rather than the gear-driven system found in most other AWD vehicles. All XFs come with an 8-speed automatic transmission.

With noticeably less weight than its German rivals at 3,770 pounds (3,880 for the all-wheel-drive version), the Jag is quicker as well, getting from 0 to 60 in either 5.2 seconds for the base 340-hp RWD model or 5.0 seconds for the rest of the cars in the range. This is at least a few tenths ahead of what the comparable E-Class, 5 Series, and A6 models can do. And on its way to 60, the car will sound very, very good. Although it will be toned down a bit compared to the F-TYPE, Jaguar’s V6 has an angry, raspy exhaust note and sounds better than just about any 6-cylinder engine available today.

The 2016 XF has nearly perfect 50:50 weight distribution, and suspension is by double wishbones at the front and an integral link at the rear. As for driver aids, the car has plenty. Jaguar’s Adaptive Dynamics system reads body movement 100 times per second and wheel movement 500 times per second and adjusts the damper settings accordingly, while the Adaptive Surface Response mode that is new for the XF AWD maps the engine, transmission, steering, and stability control according to road conditions. RWD versions, meanwhile, get the All-Surface Progress Control system, which adjusts the brakes and throttle to give the car ideal traction for each situation.

Moving to the inside, the new XF offers more overall room, especially in the rear seat and headroom department, thanks to that growth in wheelbase, and there's a new 10.2-inch touchscreen infotainment system that's much improved over the old system. There is also a reconfigurable 12.3-inch instrument cluster and an optional panoramic sunroof, but otherwise the interior would be familiar to anyone who has been inside a Jaguar in the past few years.

The rotary shifter dial is still there, as is the cool ambient blue lighting that sets it apart from other European luxury cars. As for safety, the XF comes with systems fairly typical of higher-end cars these days, including autonomous emergency braking, adaptive cruise control, lane-keeping assist, an intelligent speed limiter, and semi-automatic parking.

Consider this car representative of Jaguar’s renaissance. For much of recent memory, Jaguar didn’t really build anything worth dreaming about, but with cars like the XF, there’s finally an English alternative in the luxury market that’s been dominated by the Germans for so long.

Have you driven a 2016 Jaguar XF?
Rank This Car

Hi I own a Jaguar XFs 2016, today after I drove to my destination of 20 mins I switch off my car I get a turn on engine low battery signal. I turn on my car I drive for 20 minutes and I get chargin...

91 views with no answers yet
5

This is from a dealership and the car has only been driven to shows. It has never been titled.