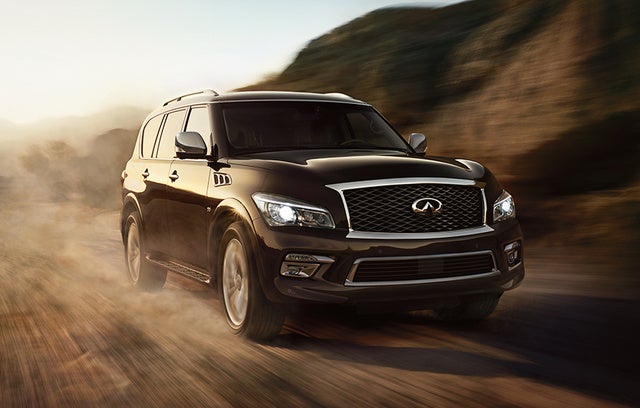 Based on Nissan's trail-blazing Patrol, the 7- to 8-passenger 2016 Infiniti QX80 full-size 5-door luxury sport ute combines agility, amenities, V8 power, and a handsome profile for the well-heeled road warrior. The new QX80 is also now offered in a limited-production Signature Series trim that gets slotted between the entry-level Base and the top-shelf Limited.

The Base and Signature Series QX80 come with standard rear-wheel drive (RWD); 4-wheel drive (4WD) comes standard on the Limited and optional on the Base and Signature Series. The QX80's 4WD system is actually an all-wheel-drive (AWD) configuration with a low-range gear and computer-controlled transfer case. Infiniti’s Hydraulic Body Motion Control System, which is also optional in the lower trims and standard in the Limited, smooths out the suspension for added stability through tight turns.

Powering the 2016 QX80 lineup is a 400-hp 5.6-liter V8 engine managed by a 7-speed shiftable automatic transmission to pound out 413 lb-ft of torque. Mileage figures reflect the vehicle's size, at 14 mpg city/20 highway/16 combined in RWD versions and 13/19/15 with 4WD. Towing capacity maxes out at 8,500 pounds, and a self-leveling rear suspension system again comes optional.

Technology includes Bluetooth-integrated Infiniti Connection infotainment and telematics with voice recognition and GPS navigation, all displayed on an 8-inch touchscreen. Entertainment features in the Base and Signature Series include a 13-speaker Bose audio system with satellite radio and an auxiliary audio input, along with a DVD-capable video monitor.

The new QX80 Signature Series, of which only 1,000 will be produced for the 2016 model year, features a unique Saddle Tan interior look, split second-row bench seating (for a total of 8 passengers), and chrome mirror caps. The QX80 Limited adds standard upgraded leather upholstery, an upgraded 15-speaker Bose audio system, special wood interior accents, and ventilated front seats. Both the Base and Limited can be equipped with the Signature Series' second-row split-folding bench seats. Cargo space stands at a generous 95 cubic feet with the rear seatbacks folded.

Challenging the 2016 QX80 in the full-size high-end SUV segment is Mercedes-Benz’s GL-Class (with its adult-friendly third-row seating), Lexus’ LX 570 and Cadillac’s Escalade.

Users ranked 2016 INFINITI QX80 against other cars which they drove/owned. Each ranking was based on 9 categories. Here is the summary of top rankings.

Just purchased a car through Cargurus. Can I pull up the pictures that were posted when it was listed on Cargurus?

How can I pull up an old ad that has been taken down from your site? Dealer misquoted milage on vehicle by over 8,000 miles and need to see what was posted on the ad.

How Is It On Gas And Maintenance Upkeep?