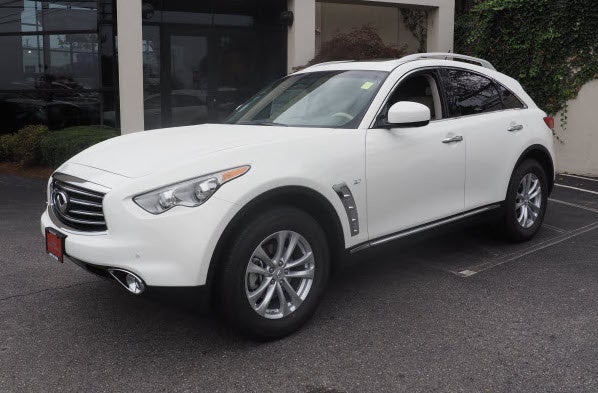 If you’re willing to trade some utility for a bit more driving fun from your midsize luxury crossover, take a look at the 2016 Infiniti QX70. Loaded with bells and whistles, packing a V6 powerplant, offering seating for 5, and sporting uncommon agility and performance, this mini-ute represents a solid choice in its niche. Be advised, however, that cargo space, at a distinctly cramped 62 cubic feet with the rear seats folded, is near the bottom of its niche, and a mere 2,000 pounds of towing capacity, even with the proper equipment, might mean the boat stays home.

In any case, for the upcoming model year, the QX70 remains offered in a single QX70 Base iteration that returns delivered with standard rear-wheel drive (RWD). But those desiring some added confidence in wintry weather can again purchase this plush people-hauler with full-time intelligent all-wheel drive (iAWD), which Nissan’s Infiniti division labels the QX70 Base AWD.

Few changes are slated for the 2016 versions of this classy crossover, although a Bespoke Edition, featuring a longer wheelbase and a number of upgrades to exterior and interior accents, is rumored to be debuting late in the upcoming model year.

Look for the 2016 QX70 to return packing the traditional 3.7-liter V6 powerplant, which remains under the auspices of a standard 7-speed shiftable automatic transmission boasting standard steering-wheel-mounted paddle shifters. This peppy combo will again put out 325 hp and 267 lb-ft of torque, to the tune of 17 mpg city/24 highway/19 combined in the RWD Base QX70 variant, and 16/22/18 in the Base AWD iteration. The current QX70 has been known to scoot from 0-60 in an impressive 6.2 seconds, and there’s no reason to expect less from the 2016 version.

Getting into what this plush crossover does best, expect such standard appearance goodies as 18-inch alloy wheels, heated power-adjustable and power-folding outside mirrors, a power sunroof, and a power-opening liftgate to return for 2016.

Bluetooth hands-free technology is also slated to return for 2016, along with the 300-watt Bose premium stereo that’ll again boast a single-CD/MP3 player, 11 speakers, satellite radio, and a pair of USB ports, all of which are interfaced via a 7-inch color monitor.

The typical (and well-heeled) owner of the current QX70 finds it to be a heck of a lot of fun to drive, with some heady performance attributes and agility complementing its good looks and its superlative creature comforts.

Gary I can't wait, to see this (NEW) QX70 AWD this Friday. But; I may still need to ride my History more till; I get Ready next summer and buy etc. Great Score, always mounts to; having a better cheaper/ reasonable payment. I trust the, Infiniti Brand 100%. These car's/ SUV's last; a pretty good while to make other Competitors, fall Short by the Penny roadside....lol lol I only hope, the QX70 is set out to; be what it is meant to etc.... Reliable, Unique, POWERFUL, Comfortable, Confident on trips, Worry-free l engine hassle and; a dependable AWD system for the record. ??.... Hopefully, the new models are clear from thing's like; a leaking differential /other. I just want a different, awesome, and a Nicely crafted new suv.

Cyrus Two generations behind in technology. This is a big buck vehicle sporting early 2000’s technology. There is no blind side warning system and no bubble mirror for driver, no compass, temp only visible to driver, no led signal or parking lights, no led interior lights, no updated nav system.....same as system in 2005 vehicles. Only 2 memory’s for seats. Mirrors do not close when vehicle turned off, must close manually. Outside mirror adjustments are impossible to use while driving. They are hidden from drivers view. Rear seats are manual fold down and up. No remote start. Must lock vehicle using door button or fob, no automatic lock or unlock. Old style stick antenna for radio, no shark fin. It’s a true rip off for a top of the line vehicle. The Big Bang comes from the 325hp engine. Keep looking and spend your money on a tech savvy vehicle.

Cyrus One more thing: It rides like a truck with the 22” wheels.