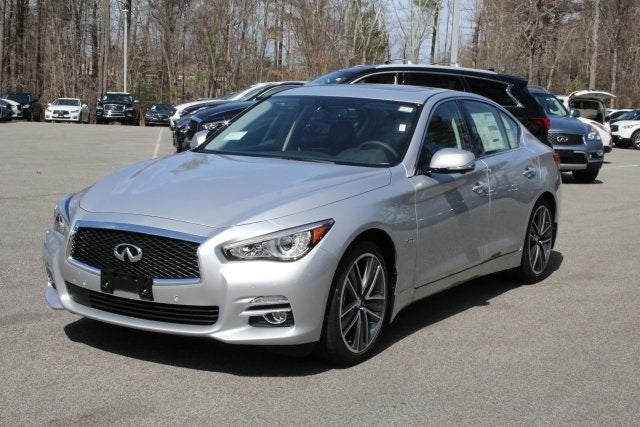 In the world of fuel-efficient sports sedans, the Infiniti Q50 Hybrid is one of the standouts. Introduced in 2014, the Q50 Hybrid has quickly made a name for itself as a sleek and sexy sedan capable of seating 5 and carrying 9.4 cubic feet of cargo in the trunk.

Powering the 2016 Q50 Hybrid is a new 3.5-liter aluminum 6-cylinder engine mated to an electric motor and lithium-ion battery, good for 360 hp and 457 lb-ft of torque. While Infiniti hasn't yet released mileage numbers for the new Q50 Hybrid, we expect to see it beat or at least tie the 29 mpg city/36 highway/31 combined put up by the 2015 model--pretty good mileage for a daily driver that can get you from 0 to 60 mph in under 5 seconds. As is usually the case for the Q50 Hybrid, you will have your choice of rear-wheel drive (RWD) or all-wheel drive (AWD), but must select a 7-speed automatic transmission with paddleshifters.

One of the biggest complaints against the older Q50 Hybrid concerned a lack of adequate feel and feedback from the steering wheel. Infiniti took those complaints to heart and will outfit the 2016 model with a second-generation version of its Direct Adaptive Steering system, which it claims will eliminate those issues and deliver a much more pleasurable driving experience. Infiniti will also couple that system with its Dynamic Digital Suspension, which will let drivers choose between Standard, Snow, Eco, Sport, Sport+, and Personal driving modes (the Personal mode lets the driver self-tune their driving experience).

Unlike its sister, the Q50, the Q50 Hybrid will be offered in a single trim. Infiniti hasn't released details on what, exactly, will be offered as standard fare on the Q50 Hybrid, but expect to see Infiniti's cool InTouch infotainment system, which works via dual touchscreens set in the dash (7-inch and 8-inch). All Q50 Hybrids will also likely sport a moonroof, leather seats, a backup camera, LED headlights, a Bose 14-speaker sound system, Bluetooth connectivity, a USB port, and SiriusXM satellite radio. Buyers will be able to add navigation, auto-dimming exterior mirrors, 60/40 split-folding rear seats, a heated steering wheel, heated front seats, remote engine start, auto-leveling headlights, and adaptive cruise control.

Safety-wise, the 2016 Q50 Hybrid should offer much of the same tech found on the 2015 model. This includes features like dual front airbags, front and rear side-curtain airbags, 4-wheel antilock brakes, electronic stability control, and traction control. A Technology Package will be available, adding blind-spot intervention, lane departure warning, lane departure prevention with active lane control, and front-seat pre-crash seat belts. If you're looking for an even safer car, you can opt for the Driver Assistance Package, which adds blind-spot warning, rear cross-traffic alert, forward collision warning, forward emergency braking, and a 360-degree camera.

The 2016 Infiniti Q50 Hybrid takes what was already an impressive car and addresses the few complaints leveled against it. Thanks to the re-designed Direct Adaptive Steering system, we expect the 2016 Infiniti Q50 Hybrid to be a truly fun-to-drive, economical sports sedan. If you're in the market for a stylish daily driver that'll get you to the office and keep you happy at the gas pump, this could be the car for you.

Have you driven a 2016 INFINITI Q50 Hybrid?
Rank This Car