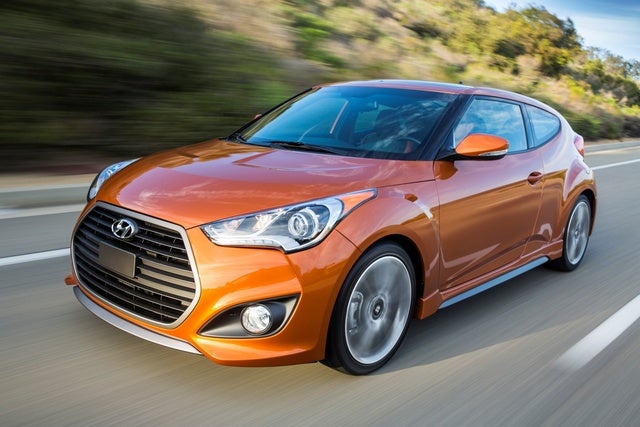 Average user score
5 ⁄ 5 stars
Based on 5 reviews
Review by Qball8 — 5☆ rating is basically because of bang for your buck. You get an authentically pleasing car with a not to shabby 201hp turbo 1.6L engine. Roomy front seats , not so roomy back seats and , lots of hat... Read more
Review by Glenn — Great little ride for my son to learn how to drive a stick. Full featured for the price, really good deal and FUN! Read more
Review by Montego_3745 — Love everything about this car. Speed, look, ful efient, hugs curves Read more 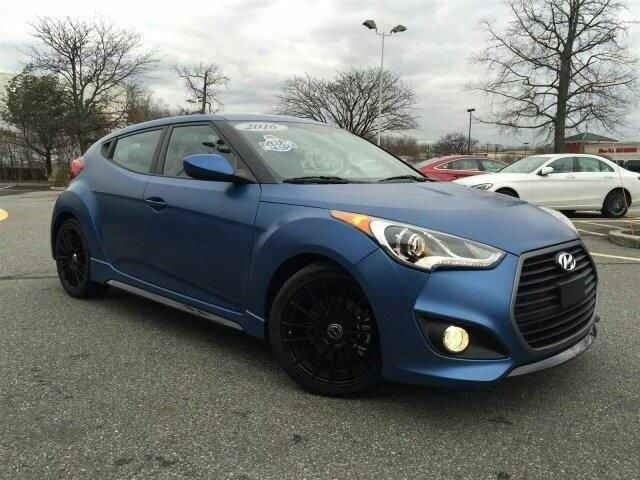 Hyundai’s heady 3-door, 4-passenger 2016 Veloster Turbo compact hatchback shows off a few subtle and not-so-subtle tweaks. Expected to remain available in the sporty Coupe trim and the stripped down R-Spec trim, the pint-sized and peppy Veloster Turbo is slated to debut a brand new Rally Edition for 2016, as well. The R-Spec-based Rally Edition will debut with upgrades like lightweight RAY 18-inch alloy wheels mounting performance all-season tires, a B&M short-throw shifter, an even more athletic suspension, faux-carbon-fiber exterior trim pieces, and a new Matte Blue exterior color scheme. The downside lies in that this uber-agile Veloster will be a limited-production trim; only 1,200 units are scheduled to be made.

All Veloster Turbo variations continue to be powered by a 1.6-liter turbocharged inline 4-cylinder (I4) engine capable of 201 hp and 195 lb-ft of torque. For 2016, however, the 6-speed shiftable automatic transmission is replaced by a standard DCT (Dual-Clutch Transmission) 7-speed shiftable automatic gear box in both the Turbo R-Spec and Coupe variations. The new Rally Edition, furthermore, underlines its super-sport image by offering only the traditionally capable 6-speed manual transmission bolstered by the aforementioned short-throw shifter.

Standard appearance features for the 2016 Veloster Turbo and its R-Spec sibling are expected to include the newly-reworked 18-inch alloy wheels and heated power-adjustable mirrors. Inside, the top-shelf trim boasts leather upholstery, heated front seats, full power accessories, cruise control, and telescoping tilt-wheel steering, to go along with air conditioning and a rear-view camera.

For the upcoming model year, both the R-Spec and its new Rally Edition offshoot delete a few of the fancier features standard in the Coupe. However, both add in a sport-tuned suspension, which the Rally Edition further tweaks to provide what the folks at Hyundai describe as a driving experience far above what you’d expect in your typical hatchback. Additionally, all Veloster Turbo variations also pack new-for-2016 steering-wheel-mounted paddle shifters.

What's your take on the 2016 Hyundai Veloster Turbo?

Users ranked 2016 Hyundai Veloster Turbo against other cars which they drove/owned. Each ranking was based on 9 categories. Here is the summary of top rankings.

Have you driven a 2016 Hyundai Veloster Turbo?
Rank This Car

The clutch pedal sticks to the floor while shifting and has to be pulled up manually. Dangerous situation. Two different dealers have worked on this issue without a successful resolution. The probl...

Why do you allow these fraudulent adds to be posted on your site? Listing clearly states the vechile is CPO, then at the bottom of a 3 page discription I find this: "Ready to be certified! This pr...

I have a new 2016 Hyundai Veloster Turbow. With poor visibility, I accidentally ran over a low profile median and ended up straddling it. I could hear metal scraping underneath. I tried to reverse...