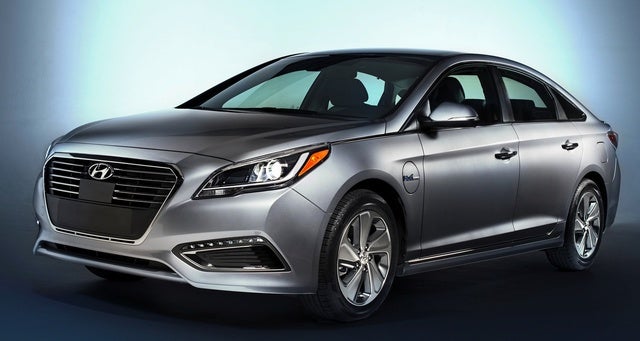 Hyundai has decided to take the plunge into plug-in hybrid technology by debuting its brand new Sonata Plug-In Hybrid for the 2016 model year. Like the regular Sonata Hybrid, the 5-passenger Sonata Plug-In Hybrid is a midsize commuter- and family-oriented sedan that gains all the styling and feature upgrades its fully gas-powered Sonata sibling received for 2015.

Additionally, each 2016 Sonata Hybrid iteration gets a new hybrid-dedicated 4.5-inch driver information display, with the Plug-In Hybrid variant further boasting new-for-2016 BlueLink apps to control, for instance, charging stop/start times, length of charge time, and remote operation of climate control and defrost functions. Both the 2016 Sonata and the upgraded 2016 Sonata Hybrid are covered as separate models.

At the heart of the 2016 Sonata Plug-in Hybrid’s eco-prowess is a 2.0-liter direct-injected (DI) inline 4-cylinder (I4) powerplant mated with a 50-kilowatt electric motor that’ll put out 202 total hp and more than 140 total lb-ft of torque. This nifty plug-in gas/electric system will be managed by a 6-speed shiftable automatic transmission that’ll allow it a class-leading 22 miles of all-electric cruising range on a full plug-in charge (at moderate speeds).

The plug-in rechargeable 9.8-kilowatt-per-hour (kWh) lithium polymer battery, meanwhile, can, of course, be juiced up via either the gasoline engine (and regenerative braking) while on the road or by simply plugging it into a 120-volt household outlet. Recharging time for a totally depleted battery using the standard 120-volt system runs about 5 hours, but hooking up to an available 240-volt system cuts recharging time to approximately 2.5 hours. Meantime, mileage is estimated at an eye-opening 38 mpg city/43 highway/40 combined. It should be noted, by the way, that all of the above numbers are offered by way of the Korean automaker’s hoopla-draped introduction of its new plug-in hybrid 4-door at the 2015 North American International Auto Show.

Features-wise, expect the 2016 Sonata Plug-In Hybrid to sport virtually all the bells and whistles of its regular hybrid counterpart, which comes in both a Base trim and an up-featured Limited version. There are hints, however, that the 2016 Sonata Plug-In Hybrid might be delivered in a single trim based on the gasoline-only Sonata’s flagship Limited version.

Additional standard bling is expected to include upscale and unique cabin appointments, a rear-view camera, dual-zone automatic climate control, and an auto-dimming rear-view mirror. Look as well for such standard entertainment features as a single-CD player with 6 speakers, satellite radio, HD Radio, and an auxiliary audio input.

As for options, an available Premium package, boasting such extras as a glossy exterior finish, a panoramic power sunroof, GPS navigation, upgraded Infinity premium audio with 9 speakers and a 7-inch touchscreen infotainment display, is expected to be the only noteworthy extra-cost add-on offered for this unique Hyundai sedan. Trunk space, by the way, is claimed by Hyundai to be a hefty (for a plug-in hybrid) 13.3 cubic feet.

What's your take on the 2016 Hyundai Sonata Hybrid Plug-In ?

1Funkat Don’t know can’t get any further then application

Have you driven a 2016 Hyundai Sonata Hybrid Plug-In ?
Rank This Car