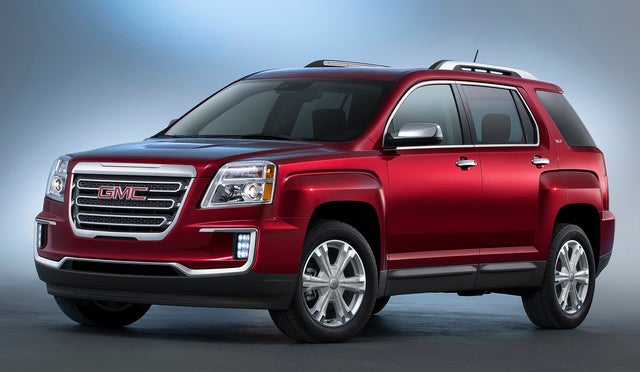 A little smaller than it once was, GMC’s handy Terrain 5-passenger, 5-door crossover once again occupies its own niche for 2016, at least size-wise. Just a little larger than a compact mini-ute, but not quite the size of your typical midsize crossover, the 2016 Terrain is just about right for the daily commute or the overnight family camping trip. And its traditional rugged Land-Rover-like looks again belie a pleasant though hardly heart-palpitating driving demeanor.

Available in a revised-for-2016 trim lineup that includes the base SL, the up-featured SLE, again with SLE1 and SLE2 configurations, and the now-singular SLT, this downsized Jimmy still offers a version for just about any budget. Expect, of course, all trims to be delivered with standard front-wheel drive (FWD), while again, all trims except the SL remain eligible for available full-time all-wheel drive (AWD). Oh, and the Terrain Denali also returns for 2016, but is covered as a separate model.

The upcoming model year also begets a few changes to this semi-midsize people-hauler’s looks and features. A pair of new grille designs are complemented by a re-styled hood and some tweaks to the front and rear fascia designs, while higher trims will carry new LED running lights into 2016. Inside, look for a slightly reworked center stack to sport a storage shelf and several re-labeled buttons.

With no mechanical changes anticipated for the upcoming model year, the traditional 182-hp 2.4-liter inline 4-cylinder Flex-Fuel powerplant again gives the entire Terrain lineup its grunt. Look for the returning 6-speed shiftable automatic transmission to manage 172 lb-ft of torque, good enough for 1,500 pounds of maximum towing capacity with the proper equipment. Mileage is expected to remain estimated at 22 mpg city/32 highway/26 combined in FWD trims and 20/29/23 in AWD editions.

Need more oomph? The SLE and SLT trims return for 2016 eligible for the available 3.6-liter V6 mill that boasts 301 hp and 272 lb-ft of torque, managed, of course, by the ubiquitous 6-speed shiftable automatic. Towing is anticipated to again be maxed out at 3,500 pounds when the available proper equipment is added, while mileage estimates remain 17/24/20 in FWD editions, and 16/23/19 in AWD-toting trims.

The expected appearance adornments in the 2016 Terrain lineup pretty much reflect the current year’s offerings, with all trims sporting 17-inch alloy wheels and power-adjustable outside mirrors. The SLE2 and SLT iterations additionally sport a standard roof rack, while the SLT tacks a standard power sunroof and a power liftgate onto the list.

Look for standard techno-goodies for the 2016 Terrain stable to include Bluetooth hands-free calling, not to mention OnStar Directions and Connections technology interfaced with 4G LTE Wi-Fi capability.

Entertainment in the lower Terrain trims is again expected to include a single-CD/MP3 player, 6 speakers, satellite radio, and an auxiliary audio input, all interfaced via a 7-inch touchscreen display. Higher trims, meanwhile, are again scheduled to boast an 8-speaker Pioneer premium stereo, bolstered by GM’s IntelliLink voice command for communications and audio functions.

Of course, lower 2016 Terrain iterations will remain eligible for many of the standard features toted by the higher-echelon variants as optional equipment. Further trim-dependent available features, meantime, are scheduled to include GPS navigation (added to the IntelliLink system), as well as upgraded and upsized wheels.

The National Highway Traffic Safety Administration (NHTSA) gives the current Terrain its second-best 4 stars for overall safety, while the Insurance Institute for Highway Safety (IIHS) has awarded the 2015 Terrain a Top Safety Pick.

Finally, owners give the current Terrain high marks for its ride, power, and posh, all adding up to impressive value in a small package. The 2016 Terrain ought once again to take on such traditional rivals as Jeep’s terrain-taming Cherokee, Honda’s well-rounded CR-V, Ford’s nimble and tech-laden Escape, Mazda’s capable CX-5, and Hyundai’s engaging Santa Fe when it begins adorning dealer showrooms in the fall of 2015.

Users ranked 2016 GMC Terrain against other cars which they drove/owned. Each ranking was based on 9 categories. Here is the summary of top rankings.

Have you driven a 2016 GMC Terrain?
Rank This Car

Can You Turn Car Off When It Is In Drive Mode

I Can’t Delete All Devices Paired With Bluetooth Is Gets To Delete Screen I...

How Do I Put A Car To Sell On Car Gurus

Is anyone else having transmission problems with a 2016 Terrain Denali?

I Want To Find A Car Filtered By The VIN

I have the vin, I want to see the car