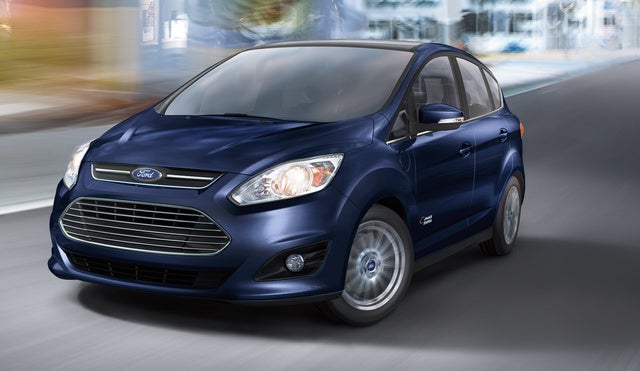 Perhaps Ford is trying a little too hard with the C-Max. Its 2016 C-Max Hybrid and C-Max Energi compact wagons appear to be aimed directly at Toyota’s Prius V and Prius Plug-In duo, and while the C-Max is a handsome and capable car, Toyota has it beat in both cargo capacity and fuel efficiency.

At any rate, the 5-passenger, 5-door C-Max will see some cosmetic upgrades for the 2016 model year. Both the Hybrid and the Energi receive a new grille bordered by sleeker headlights, a smoother tailgate design complemented by a set of slinkier taillights, and slightly tweaked alloy wheels. Inside, there’s a reworked center stack with friendlier knobs and buttons, a slightly larger glovebox, and some improvements in accent materials.

The 2016 C-Max Hybrid comes in the entry-level SE and the up-featured SEL, with the Energi available in a single separate trim. Both wagons are offered in front-wheel drive (FWD) only, and should you be planning to carry much cargo, the C-Max Hybrid returns with 52.6 cubic feet of load space with the rear seatbacks folded and the Energi with a leaner 42.8 cubic feet due to its plus-size battery pack.

Powering the C-Max Hybrid for 2016 will be a 2.0-liter inline 4-cylinder (I4) that mates with an electric motor to produce 188 hp. A continuously variable transmission (CVT) manages the hybrid electric powertrain’s 129 lb-ft of torque, and the electric motor is powered by both a 1.4 kilowatt-per-hour (kWh) lithium-ion battery and regenerative braking. But Ford’s claim that the current C-Max Hybrid is good for 42 mpg city/37 highway/40 combined is under dispute.

The 2016 C-Max Energi plug-in hybrid returns with its 2.0-liter gasoline-fired I4 powerplant, along with the CVT and a more elaborate electric motor powered by a 7.6 kWh lithium-ion battery that Ford claims is capable of carrying the Energi up to 19 miles on electric power alone. The Energi comes with a standard 120-volt charger that will fully recharge the battery in approximately 5 hours, while an optional 240-volt charger will recharge the battery in about 2.5 hours. Once the battery’s charge is exhausted, the Energi operates just like the C-Max Hybrid.

Options in the 2016 C-Max are expected to include GPS navigation, a fixed-glass sunroof, remote engine start, a 9-speaker Sony premium audio setup, front parking sensors, and, in the Hybrid SE and SEL only, an auto parallel-parking feature. No significant option upgrades are expected.

Aside from unreliable fuel-efficiency figures, current owners knock the C-max for its meager cargo space and oversized turning radius. But owners tend to like the current editions' eco-friendliness, quiet cabins, and silky ride. Look for the 2016 C-Max to appear in dealer showrooms this fall, competing with Toyota’s well-wrought Prius and Chevy’s nifty Volt, which again boasts about twice the C-Max Energi’s range in all-electric mode.

Michael Just bought my 16 c max and the vehicle alarm goes off all the time ,I set the alarm with my remote and it goes off with 15 seconds for no reason ,can you help ?>

Have you driven a 2016 Ford C-Max Energi?
Rank This Car

can i operate my 2016 ford c-max energi in gasoline engine mode only for an extended period of time?

How Many Hours Do You Need To Recharge The Car

Do I Get The Mfg. Warrantee On Used Hybrid?

do i get the Mfg. warrantee on used hybrid? I am Looking at 2016 and 17 FordC max hybrids. will I still get the rest of the 8 year warrantee on batteries? And of course any other item in the car?