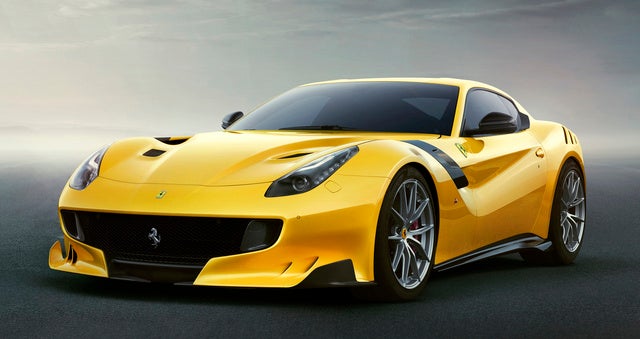 As a large Grand Touring (GT) car with a hefty V12 up front and rear-wheel drive (RWD), the F12berlinetta is the most traditionally Ferrari-like car that Ferrari currently builds, having replaced the similarly traditional 599 back in 2012. At well over $300,000, the F12 is positioned above the 488, California, and FF in Ferrari’s lineup, but it remains far below the top-shelf LaFerrari.

Changes are minimal for the 2016 F12berlinetta, but one new option is the F12tdf, a more hardcore version with a little more of everything and a price tag of $490,000. The “tdf” in this case refers to the Tour de France Auto, a race that 250-powered Ferraris – one of which came to be called the "250 Tour de France" – dominated in the second half of the 1950s. A significantly tweaked version of the F12berlinetta, the new F12tdf has entirely different bodywork (other than the roof and A-pillars) and is a more serious car all around. But while the regular "base" F12berlinetta may be significantly cheaper, it’s no slouch, and still one of the most powerful and exclusive cars you can buy.

Under the F12’s long hood is the 6.3-liter version of Ferrari’s F140-series V12 that began its life in the Enzo, now tuned for 731 hp and 508 lb-ft of torque. The engine will rev to a howling and spine-tingling 8700 rpm, and really has to be heard in person to for a full appreciation of its fantastic exhaust note. In a world where cars are increasingly moving toward fuel-sipping turbocharged engines, it’s refreshing to see that Ferrari is sticking to its 12-cylinder roots. The F12berlinetta goes from 0 to 60 mph in 3.1 seconds and has a top speed of over 210 mph. Shifting is done by a 7-speed dual-clutch transaxle operated via carbon-fiber paddle shifters – Ferrari is a world leader in modern gearboxes, and shifting on the F12berlinetta said to be crisp and seamless.

Stepping up to the F12tdf gets you significantly more punch from the already potent V12, with 769 hp and 519 lb-ft of torque. The 0-to-60 time drops to less than three seconds, and top speed rises to 215 mph. The redline is also raised to an insane 8900 rpm, and the tdf adds one-piece brake calipers from the LaFerrari, wider front tires, and active rear steering. It’s hard to imagine a gearbox that could shift gears quicker than the lightning-fast unit in the F12berlinetta, but shifting really is faster in the F12tdf, and the vehicle's overall weight is trimmed by 243 pounds, thanks to less glass and more carbon fiber. The F12tdf's added power, reduced weight, and quicker handling translated to a lap time around Ferrari’s Fiorano test track two seconds faster than that of the normal F12berlinetta.

The F12berlinetta is a relatively comfortable car, more a GT than track-day toy, and you could theoretically drive it every day. The manettino drive-mode selector, located on the steering wheel, lets you select one of several modes that heighten the car’s versatility, allowing it to be at its best everywhere from rush hour traffic to a high-speed trip through the Swiss Alps. The F12tdf, however, is a sharper, harsher car, but features active rear-wheel steering (a first for Ferrari) and larger tires for better and more secure handling through hard corners.

Inside, the F12berlinetta features the familiar blend of quality leather, aluminum, and carbon fiber that’s common to most modern Ferraris. Ferrari also offers its Tailor Made personalization service, which allows a driver to choose from among different materials, colors, and technology in order to create a unique cockpit. This service is expensive, though, and the costs can really add up as the customer gets more imaginative. Inside, the F12tdf is a different story, with a more spartan and purposeful space. There are thinner carbon-fiber seats (instead of leather), a patterned aluminum floor (instead of carpets), and a lighter carbon-fiber and Alcantara trim. But because it’s not a complete track car, it still comes with air conditioning and a radio.

Buying an F12tdf isn’t as simple as walking into the dealership and writing a check. You have to have owned at least five other Ferraris before the company deems you worthy enough to own one and invites you to make a purchase. And while less extreme than the F12tdf, the F12berlinetta is nevertheless very exclusive as well, and both models are standouts in a competitive field of high-performance exotics.

Have you driven a 2016 Ferrari F12 Berlinetta?
Rank This Car