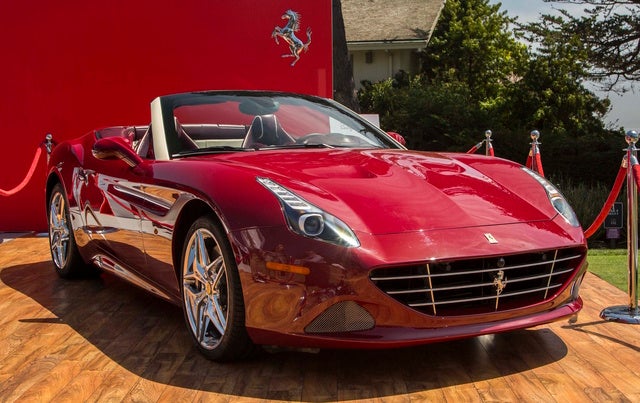 Few brands, automotive or otherwise, command the sort of recognition and gravitas that Ferrari does. The automaker truly has a reputation that precedes it, respected and adored by people the world over--a reputation earned with breathtaking performance and stunning good looks. The 2016 Ferrari California T houses that Italian driving passion in one head-turning convertible.

The California T is regarded in the driving community as a “grand touring,” or GT, car, a term used to define any performance car that can make a long journey in comfort and style--see the California T's adjustable suspension system and smooth-revving V8. The name California goes back to the 250 GT Spyder California of the late 1950s, which made an appearance as the red convertible in “Ferris Bueller’s Day Off.” The modern California entered the U.S. market for the 2009 model year.

Then the California T replaced the California in 2015. The “T” signifies the employment of a new twin-turbocharged V8, the first time a turbocharger has been used on a Ferrari road car since the 1987-1996 F40, the last car Enzo Ferrari oversaw before his death. The 3.9-liter twin-turbo unit makes 552 hp and 557 lb-ft of torque, sent to the rear wheels through a slick-shifting 7-speed dual clutch gearbox. This combination allows the California T to get from 0-62 (100 kmh) in just 3.6 seconds, with a top speed of 196 mph.

With the 2015 engine update came an overall redesign that saw new exterior sheet metal, an all-new interior, and a revised chassis. The new exterior features thinner and more sharply raked LED headlights and chrome inserts in the grille that evoke the look of vintage Ferraris. Out back, the stacked dual exhaust pipes of the previous model are replaced with more conventional side-by-side dual exhaust ports.

Aside from the turbocharged powerplant, the key component of the California T’s driving experience is the power-retractible hardtop (instead of a cloth top or a single removable roof panel). The power top is a work of engineering that opens or closes in just 14 seconds, providing 4-season protection from the elements with the top up, plus added structural rigidity and ample trunk space.

Lowering the power top reveals the revised interior. The new layout isn't readily apparent to the untrained eye, but anyone who slips behind the wheel will enjoy the improvements. The controls have been simplified, the lower center console has been streamlined, and the infotainment system has been updated, including the addition of Apple’s innovative CarPlay system—the California T is the first Ferrari model to carry CarPlay technology.

CarPlay allows you to access many of your iPhone’s features in the most streamlined and safest way possible. Once your phone is connected to the car, you can access various phone features through the touchscreen interface: place a call, send and receive text messages, and even use the phone's maps app rather than the car’s native navigation system. It also makes tapping into your music library incredibly easy and allows you to use streaming audio apps like Pandora, Stitcher, and Spotify.

Infotainment technology is all well and good, but this is a Ferrari, and as such it needs to deliver heart-pounding performance. To this effect, the California T provides front double-wishbone suspension and multilink rear suspension. The real technology is the MagnaRide system, which employs car shocks filled with a magnetically sensitive fluid. With the push of a button, you can manipulate these shocks in order to provide two modes of shock response, altering the handling characteristics of the car. Slowing the California T when you enter corners is a cutting edge carbon-ceramic braking system that won’t fade as you keep pushing the car.

Base MSRP for the 2016 Ferrari California is $202,723, an incredible deal given the prices of competing models from the likes of Maserati and Bentley. But keep in mind that the price climbs quickly when you begin adding options and other personal touches.

And yet one might give his or her firstborn for a Ferrari, or a least a thumb, and with good reason. The undisputed style and thrilling performance that Ferrari is known for has never been found in a more comfortable and tech-laden package than in the gorgeous Ferrari California T.

What's your take on the 2016 Ferrari California T?

Have you driven a 2016 Ferrari California T?
Rank This Car