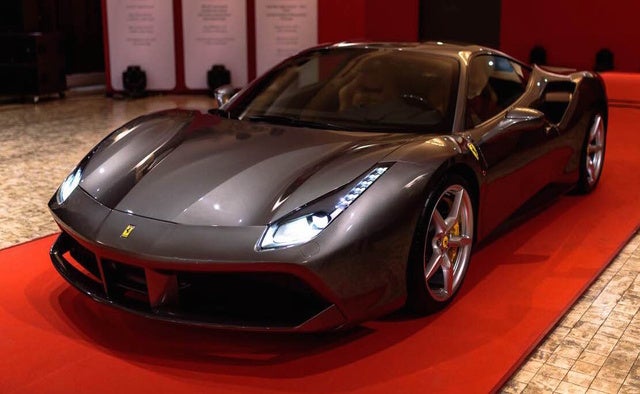 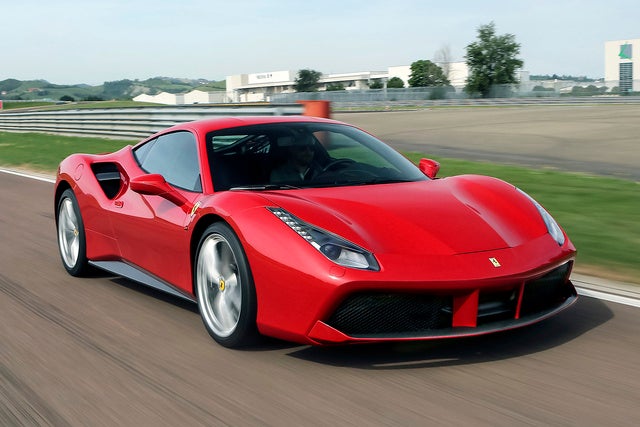 The (horse) power-hungry elite have gotten their way, again. Ferrari has been turbocharged.

Some old-school Ferrari enthusiasts will howl at the turbocharged revolution, primarily because the new power plant won’t produce the same kind of howl that the outgoing non-turbo, flat-plane, crank-shaft V8 made famous. But the company was determined to deliver more power in this latest version of their iconic mid-rear-engine supercar, and didn’t want to drop efficiency through the floor--or couldn’t, due to Corporate Average Fuel Economy (CAFE) regulations. Either way, the answer was turbos.

The new turbocharged engine is a 3.9-liter V8 that produces 661 horsepower and 561 lb-ft of torque, which is available across the full rev range. All of those numbers are significantly different than those assigned to the 458, which had a 4.5-liter V8 that made 562 horsepower and--here’s the real kicker--398 lb-ft of torque. All that new power will be channeled to the rear wheels of the 488 through a seven-speed dual-clutch transmission.

An increase in torque is always a benefit of turbocharging, while a common negative with the turbos is lag. Ferrari has done its best to answer that problem with titanium-aluminum vanes and other turbo technology, reducing throttle response time to a scant 0.8 seconds. The addition of the turbos has also dropped the redline down from 9,000 RPM to 8,000 and quieted the legendary soundtrack. But Ferrari worked to recreate the engine growl through exhaust headers with longer, equal-length piping and a flat-plane crankshaft. Though it may not duplicate the old howl, the new engine noise can still boil blood.

The increase in power does not mean a decrease in handling, thanks to some other innovations. The mechanics and electronic system are now fully integrated through the SSC2 Side Slip Angle Control System, which Ferrari says creates 12% faster acceleration out of corners and 9% faster response times than the previous 458 models. Essentially, you can push this supercar beyond its limit in a corner and it will just gracefully slide until you reign it in. The 488 is also 23% more rigid that its predecessor thanks to a new spaceframe chassis that uses 11 aluminum alloys and other noble metals such as magnesium.

A new generation of magnetorheological dampers on the 488 improves handling and ride quality over rough patches of road. The springs are still ultra firm, but the SSC2 system can automatically put a little more cushion in the shocks.

A look at the rear of both trims reveals other differences. The Spider has a piece of sheet metal covering the engine (as opposed to the sloping rear glass on the GTB), and there are a half dozen heat extractors in the rear of the Spider, along with two flying buttresses behind its seats. The electric glass rear wind stop on the Spider has three settings to help you stay comfortable and get the most out of the engine soundtrack. The retractable hard top folds backward in two overlapping sections in just 14 seconds and rests flush on the engine.

The two trims look identical from the front and side, which is to say they are both sexy, sleek and stunning. The wide-open front air intake and air ducts in the hood are part of the aerodynamic improvements and add a touch of aggressive sophistication to the design, which does take most of its cues from the outgoing 458. The rear is slightly wider to accommodate the new engine and there are also new air inlets incorporated into the rear fenders just behind the door.

Inside, the 488 looks and feels exactly like you’d want a supercar to feel - space-age, high-end and leathery. There’s a new knob to control the infotainment features, which is a welcome addition, as well as a pair of screens--one displays car data such as boost and turbo efficiency gauges and the other gives you all the infotainment particulars.

Users ranked 2016 Ferrari 488 against other cars which they drove/owned. Each ranking was based on 9 categories. Here is the summary of top rankings.