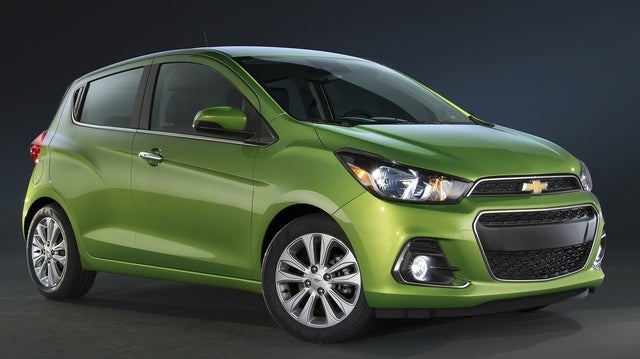 For urban-dwelling commuters who want a downsized hatchback, Chevrolet offers its subcompact Spark with some hefty upgrades for 2016. This 5-door, 4-passenger paragon of value sports a new look for the upcoming model year, as well as more power, improved safety technology, and a number of upgrades to interior styling and features.

Again offered in 3 trims—the base LS, the midlevel 1LT, and the top-shelf 2LT—the 2016 Spark stable deviates somewhat from Chevy’s re-ordered branding for the upcoming model year in keeping the numerically differentiated LT trims.

Look for the 2016 Spark to debut a new grille and front fascia design, as well as a new headlight configuration. Also new for the 2016 model year, the Spark will ride on a slightly longer wheelbase, which Chevy claims increases passenger room. As yet, however, cargo space has not been claimed to be any larger than the current generation’s 31.2 cubic feet (with the rear seatbacks folded). A further disappointment for the upcoming Spark variants, at least in the minds of most reviewers, is the continued frustration caused by trying to fold those rear seatbacks.

Also expected to debut in the 2016 Spark is a more conventionally styled interior that boasts a redesigned dashboard and instrument-cluster arrangement that Chevy claims to be more ergonomic than the current version. Included in this interior upgrade are seats that are significantly more comfortable than the current ones.

Also coming next year is an up-powered version of the 1.4-liter inline 4-cylinder (I4) engine stashed in the current Spark. The new mill is slated to put out 98 hp under the management, once again, of either the standard 5-speed manual shifter or the available continuously variable transmission (CVT). The folks at Chevrolet additionally claim a marginal bump in mileage from this reworked 4-cylinder for next year, to go along with its 14 extra ponies.

Techno-goodies slated for the next-gen Spark include, besides the upgraded OnStar telematics (which boast the 4G LTE WiFi connection that debuted for 2015), improved MyLink infotainment, now with a 7-inch color display, a CD player with 4 or 6 speakers depending on the trim chosen, and an auxiliary audio input. Higher trims will also return toting standard satellite radio.

Options for the 2016 Spark, unfortunately, are not available at the moment, but expect them to remain comparatively sparse.

The current Spark lineup gets 4 out of a possible 5 stars for overall safety from the National Highway Transportation Safety Administration (NHTSA), while the Insurance Institute for Highway Safety (IIHS) gives the 2015 versions a score of Good in all safety tests except small-overlap frontal-offset testing which gets a second-best Acceptable rating.

Look for the 2016 Spark to debut in the late fall of this year, when it will again take on such capable rivals as the more expensive Fiat 500 and Scion iQ, along with its somewhat larger competitors like Ford’s Fiesta, Honda’s Fit, and Kia’s surprisingly sprightly Rio.

What's your take on the 2016 Chevrolet Spark?

mikeinNO I'm intrigued, and the Spark is high on my list of a potential next car. It is definitely more attractive inside and out, sounds to be quieter and more solid on the highway due to more rigid body, and the added horsepower is definitely nice. My main concern would be getting the most fuel efficiency possible. The Spark siblings around the world are all getting GM's 1.0L powerplant, at only 74 peak HP but an awesome 46-47mpg equivalent (estimated). On-par with Mitsubishi's Mirage for power but even better mpg, it does sound too weak for the U.S. market, but I worry Chevy has given away too much fuel economy by jumping to a 1.4L engine. How much would it have cost to turbo-boost the 1.0L motor? I would have gladly paid an extra $800-$1,000 for that phenomenal mpg and good power combo. Chevy's not telling us yet what the manual transmission variant achieves in mpg ratings. But if it does not beat the current 39 hwy mgp, I'll be disappointed for sure.

kkollwitz Bought a 2016 LS CVT 3 days ago for my daughter. Wow, have small cars come a long way since my 1984 CRX! I was way surprised by the base Spark LS's touchscreen, Bluetooth, rear backup camera, standard A/C, rear wiper & defrost etc. At the same time my daughter was more interested in the tech stuff than the power locks, power side mirrors, power windows, nicer materials, and cruise that this car does not have. A good trade-off. We both found the backseat to be cozy but acceptable. I was quite comfortable driving home for 2 hours, although I missed having cruise. But it's not going to be my car, and the daughter doesn't like to use cruise anyway. I was satisfied with the 98hp of the new 1.4L, and find the CVT to be completely unobtrusive and smooth. The car was weirdly quiet even at 60+ mph for being so petite and upright. And 2,000rpm at 60 mph? I would have expected 3,000. It's light and nimble, fun to drive; but I won't be seeing how fast it stops, corners or accelerates. I have my own car for that kind of tossing. I did not drive a 2015, so can't compare the two. In the 3 days (1 highway, 2 in town) the car has been driven it's averaged 36.6mpg, so the 41mpg EPA is probably accurate.

Have you driven a 2016 Chevrolet Spark?
Rank This Car

Behind The Front Fascia Where You Screw In The Recovery Tow Eye On The Pass...

When buyers show interest, ask for a test drive and then never respond to a test drive schedule or respond period via Car Gurus messaging, what can you do about it? I received an offer for my vehicle ...

543 views with 4 answers (last answer about a year ago)

What Does Error Code 68 Mean?

906 views with 2 answers (last answer about a year ago)