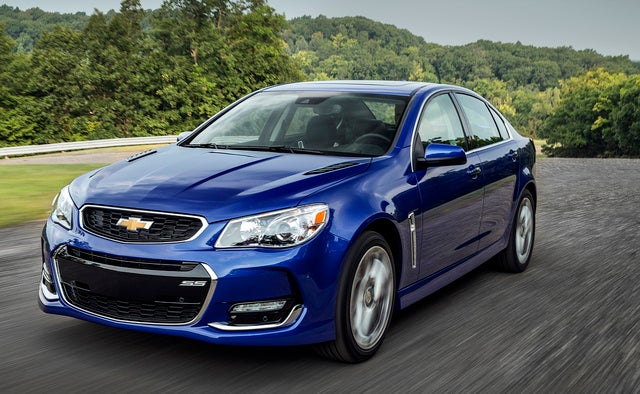 Sleeper car: A powerful performance car with an unassuming exterior design. While all the rage in America from the 1950s through the early 1970s, the idea of a car that has plain-Jane looks and a monster engine has by now been mostly forgotten. But if any car still carries the torch, it's the 2016 Chevrolet SS.

A rear-wheel-drive, V8-powered sedan with the looks of an Impala rental car, the 2016 SS is still imported to America from GM of Australia, which has been manufacturing the SS for many years as the Holden Commodore. Soon to be discontinued, the current SS may become part of GM lore, like the Pontiac G8 and the last generation Pontiac GTO, both of which were appreciated more after their passing than during their sales runs. The Chevy SS will receive some styling changes for the new model year, but its powerful engine and capability for speed remain the same.

Every sleeper car is defined by its engine, and the 2016 Chevy SS is no exception. Its 6.2-liter, V8 engine is similar to the powerplant found in some Camaros, Corvettes, and Cadillac sports sedans. Making a robust 415 hp, the SS can (according to Chevy) rocket to 60 mph from a dead stop in just 4.7 seconds. Abundant low-end torque give the SS passing power to spare in every situation, and a limited slip rear differential helps put that power to the road. Buyers will choose from a manual or automatic transmission, each with 6 forward gears; the manual will not offer the Corvette’s rev-matching technology, but drivers will love it for its old-school charm. Chevy will add a dual-mode exhaust for 2016, just one more way the SS can be made to sneak quietly around town when cruising, but let its voice be heard when it wants

Chevrolet envisions the 2016 SS as a sports sedan, so it's no surprise that the car will have a sports-tuned independent suspension with magnetic ride control. The SS will be the least expensive performance car in the world with this technology, which can soak up bumps like a luxury cruiser and then become race-car firm in a millisecond. Stopping the SS will be left to Brembo brakes that get painted red calipers for the upcoming model year, the calipers visible through the 19-inch machine-finish alloy wheels wearing performance rubber (last year's model had chrome wheels that didn’t match the theme of the car very well). One would assume the SS to be nose-heavy, but it isn’t: Chevy promises that the 2016 model will have a perfect 50-50 front-to-rear weight distribution.

We put off mentioning styling because it's not really a highlight of the 2016 Chevy SS--but one can still look on the bright side. The sedan will have a very common and passive look for everyday traffic, rather than the in-your-face tough-guy look that a Chrysler 300 or German performance sedan would wear, and all the better if you want to sneak past traffic stops and keep a low profile. But this does not mean that the SS will be a bad-looking car; it won’t. Up front, the chrome trim is being reduced for 2016 and the lower fog-lamps are being replaced with LED running lights. Two vertical slots on the lower outer edges of the front fascia are to be added to introduce cooling air to the front brake rotors and improve aerodynamics, and the hood will get two small functioning breather slits.

Inside, the 2016 Chevy SS will feature leather racing style seats, although the steering wheel and dash are more conventional and will look the part of the Chevy family vehicle. Chevy will include its excellent head-up display, which projects turn-by-turn direction into the driver’s field of view, shows the vehicle’s speed, and can be set to display other information as well. Like all current Chevrolets, the 2016 SS will have built-in 4G LTE WiFi.

If there is one place that the SS won’t shine, it will be at gas stations. The 2016 Chevy SS will have abysmal fuel economy. We expect the manual SS to achieve only 15 mpg city/21 highway/17 combined, and the automatic will likely come in just under at 14/21/17. Drivers will have to reach for the premium nozzle as well.

Expect the 2016 Chevrolet SS to cost about $48,000. That price includes navigation, rear cross traffic alert, and forward collision warning. There will be very few options and no packages expected. Quite a bargain given the content the car will pack. Keep in mind that the 2016 Chevrolet SS is also one of the last affordable, rear-wheel-drive, muscle car sedans left in existence. Those looking for incredible performance in a package that does not attract attention will be very happy with this sedan, which Chevy says will go on sale in early 2016.

Parklane Wrong, there are two packages, both accessories, the appearance blackout package, and the 20 inch wheel and tire package.

Users ranked 2016 Chevrolet SS against other cars which they drove/owned. Each ranking was based on 9 categories. Here is the summary of top rankings.

Have you driven a 2016 Chevrolet SS?
Rank This Car