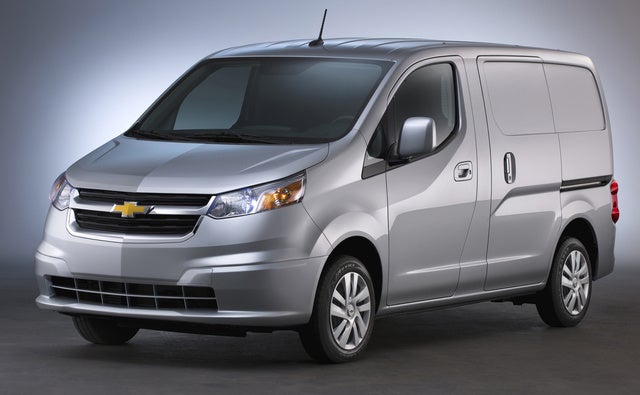 Suddenly, pint-size, urban-oriented cargo haulers are hotter than jalapeno peppers. Better late than never, Chevrolet’s 2016 City Express will enter its second year in the fray with few, if any, changes to its unapologetically bare-bones profile, cabin, and powertrain.

Based on Nissan’s capable NV200 (which is also one of this Chevy’s closest rivals), the City Express comes in a pair of trims, the base LS and the marginally up-featured LT. For 2016 it’s expected to return toting 2-passenger seating, with the capability of accommodating up to 122.7 cubic feet of cargo behind said bucket seats. While this van’s downsized dimensions make it ideal for the tight alleyways, traffic-laden avenues, and challenging curbside parking of the big or even the medium-size city, lengthier cargo items will continue to pose issues, even with the standard fold-flat passenger seat.

Delivered with only front-wheel drive (FWD), the upcoming City Express will doubtless return with both trims sporting a 2.0-liter inline 4-cylinder (I4) engine mated with a continuously variable transmission (CVT) that’ll manage 131 hp and 139 lb-ft of torque from this ho-hum “powerplant.” The good news is EPA-estimated mileage of 24 mpg city/26 highway/25 combined. The bad news is that this underwhelming mill gets noticeably overwhelmed when loaded close to its 1,500-pound payload limit, according to both reviewers and owners.

Appearance features and creature comforts, meanwhile, are nothing to write home about either, but then, the City Express is, after all, a work van. In any case, look for 15-inch steel wheels to return to the base LS for 2016, as well as sliding rear cargo doors on each side, with the cabin offering standard vinyl and cloth upholstery, tilt-wheel steering, air conditioning, and a CD player with 2 speakers and an auxiliary audio input.

Moving up to the City Express LT for 2016, expect to find such added standard equipment as cruise control, power windows and door locks, keyless entry, heated power-adjustable mirrors, rear parking sensors, and a 12-volt power outlet in the cargo bay.

Options-wise, the 2016 City Express will return offering various configurations of shelves and storage bins, as well as a couple of rear window arrangements, and, with the Appearance package, some added exterior chrome pieces and body-color accents. Additionally, expect the LT to remain eligible for upgraded techno-bling that includes a 5.8-inch touchscreen to manage audio functions, as well as an available GPS navigation system, satellite radio, Bluetooth hands-free calling, and a rear-view camera.

Finally, expect the 2016 City Express to begin arriving at dealer showrooms in the fall of 2015, but before you whip out the old checkbook, you might want to check out Ford’s well-endowed Transit Connect and Ram’s two capable urban warriors: the ProMaster City and the V6-powered C/V Tradesman.

What's your take on the 2016 Chevrolet City Express?

Have you driven a 2016 Chevrolet City Express?
Rank This Car