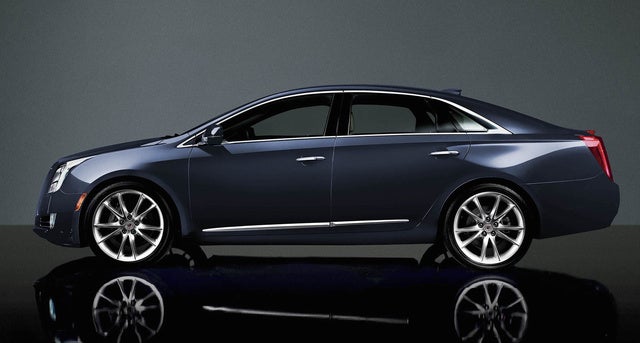 Those seniors among us who simply must have a high-end grandkid-toting land yacht might want to take a look at Cadillac’s 2016 XTS lineup. This well-appointed 5-passenger luxury sedan offers plenty of cabin space and a ton of creature comforts, not to mention a vast 18 cubic feet of trunk capacity.

Again, the XTS comes in 4 non-turbocharged trims, known as “Collections” in Caddy-speak, and a pair of twin-turbocharged Vsport versions. Beginning with the entry-level Base and the up-featured Luxury, the normally aspirated segment jumps to the seriously plush Premium and the top-shelf Platinum. For those who want both posh and increased performance, the Vsport Premium and the Vsport Platinum each boast forced-air power, as well as standard full-time all-wheel drive (AWD). And although front-wheel drive (FWD) is standard in the non-turbo iterations, all but the Base can be delivered with AWD as an option.

A few folks in the automotive media have hinted that the XTS won’t live long enough to be offered in a second generation, therefore there are few noteworthy upgrades for the upcoming year. A quartet of exterior colors are deleted and replaced by 3 new hues: Red Passion Tintcoat, Stellar Black Metallic, and Crystal White Tricoat. Each, by the way, is an extra-cost option.

Further changes for 2016 include upgrades to the Cadillac User Experience (CUE) infotainment technology, including the deletion of the SD-card slot, as well as a new grille on all collections except the flagship Platinum, which instead offers a new-look Cadillac badge up front for the upcoming model year. Also new exclusively to the Platinum Collection this year are newly standard upgraded power-adjustable front seats with a massage function, while the Driver Awareness package (standard in the Premium and Platinum Collections, optional in the Luxury) will debut a surround-vision camera system. And last but not least, a new inductive wireless-device charging system will also be delivered standard in all trims for 2016.

For 2016, the 3.6-liter V6 powerplant remains the sole engine offering for the XTS stable, and as is traditional, this ubiquitous mill comes in a pair of variants. Non-Vsport editions will return carrying the normally aspirated version, putting out 305 hp and 264 lb-ft of torque. Both Vsport Collections, meanwhile, again boast the twin-turbocharged edition with its 410 hp and 369 lb-ft of torque, theoretically capable of hitting 60 mph in 5.4 seconds.

Anyhow, both versions of the V6 remain mated with a 6-speed shiftable automatic transmission, rated at 18 mpg city/28 highway/21 combined in FWD editions, and 17/26/20 in AWD iterations of the non-Vsport Collections. In the AWD-toting turbocharged Vsport variants, of course, mileage drops significantly to 16/24/19.

The 2016 XTS is, as noted, slated to return essentially unchanged when it goes on sale in the late summer of 2015. Depending on the trim selected, look for 19- or 20-inch alloy wheels and active suspension dampers to be standard, along with LED taillights, rear parking sensors, and heated reverse-tilt power mirrors. The Luxury and above Collections, meanwhile, add standard dual exhaust tips to the equation, with the Platinum also throwing in a standard power sunroof.

Techno-goodies in all trims, furthermore, are scheduled to include standard Bluetooth-interfaced OnStar telematics, the upgraded-for-2016 CUE infotainment system, and 4G LTE WiFi capability that GM debuted for most of its brands in the 2015 model year. Entertainment, meanwhile, includes a Bose premium audio setup, with 8 speakers, satellite radio, and an auxiliary audio input in the Base and Luxury Collections, while the Premium and Platinum versions add standard Surround Sound via 6 additional speakers. Curiously, the once-included CD/MP3 player was deleted from both systems for the 2015 model year.

Options for lower XTS trims/Collections will again consist of many perks found standard in higher-priced collections once again for the upcoming model year. Additionally, rear-seat DVD/Blue-ray entertainment returns as an option for the Premium and Platinum collections.

Look for all 2016 XTSs to return toting 4-wheel antilock brakes, traction and stability control, front side-mounted airbags, front and rear curtain airbags, daytime running lights, and turn-signal-integrated mirrors. Of course, all versions remain equipped with OnStar emergency communications and alerts, high-intensity-discharge (HID) headlights, and a remote antitheft alarm, with the Premium and Platinum collections again boasting a standard head-up windshield display. Also, each of these higher-echelon iterations again comes with the standard Driver Awareness package featuring lane-keeping assistance, blind-spot monitoring, forward collision alerts, and a vibrating safety-alert driver’s seat, as well as the debuting surround-vision camera system. Oh, and expect the 2016 XTS to garner the same perfect overall safety scores from both the government and the insurance industry as the current offering received.

One downside to this otherwise well-wrought grampa-mobile is, according to some in the media, the somewhat oldster-intimidating array of technology packed into this classy Caddy. Should you want to check out the competition, meanwhile, you can peruse the Chrysler 300, with its standard rear-wheel drivetrain (RWD), Hyundai’s surprisingly upscale Genesis, or the somewhat smaller but no less impressive Audi A6 and Mercedes-Benz E-Class midsize 4-door sedans.

Sampo I want one. Have 2013 Cts that I love, but the XTS platinum sounds great.

mdrussell I don't know why this car is so criticized as a 'grandpa" car. it's size is a great asset for hauling people, not just 'grandkids' and its as nimble and quick as many smaller sedans. I traded in a CTS for a little more size and its been a great vehicle...and no I'm not a grand pa.

Users ranked 2016 Cadillac XTS against other cars which they drove/owned. Each ranking was based on 9 categories. Here is the summary of top rankings.

Have you driven a 2016 Cadillac XTS?
Rank This Car

Can You Recall Ads From 30 Days Ago?