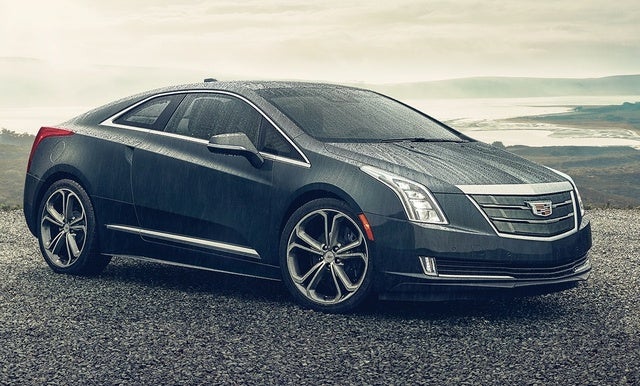 Forget what you may have heard about the Cadillac ELR. If you ever have a chance to stand next to one in person, just step back and look at it for a while. Many automotive writers say it's the best looking car in the GM lineup. Looks are subjective, but when you see it in the wild, the Cadillac ELR is stunning.

The 2016 Cadillac ELR is a front-wheel-drive (FWD), 2-passenger extended-range electric vehicle (EREV). It can drive about 39 miles on electricity alone. The vehicle also has an onboard 1.4-liter, 4-cylinder gasoline engine that aids in the propulsion of the car indirectly, and at times sort of directly. For the most part, the gas engine charges the battery and lets the electric drivetrain do the pushing. In combination, a fully charged ELR with a full tank of gasoline can go 330 miles before stopping to re-fuel and re-charge, meaning it should cause no range anxiety. At any point, the driver can stop and refill the gasoline tank and drive on. That said, most Volt owners, and presumably ELR owners, use their car as an electric-only vehicle and rely on the gas engine only in the odd road-trip scenario.

The 2016 Cadillac ELR is significantly updated compared to its 2014 debut version (which covered the 2015 model year as well). Almost every mechanical aspect of the car has changed for the better and, like most EVs, its price has dropped significantly. Having previously shared its drivetrain for the most part with the Chevy Volt, the two are now more different, since the Volt has a generation-2 Voltec drive and the Cadillac ELR stays with the first generation in a newly revised form.

Let’s start the list of changes with the most frequently cited cause of the ELR’s poor sales: price. For 2016, the ELR drops in price to $65,995. The ELR qualifies for the full $7,500 federal tax deduction (assuming you do), so the number GM wants you to have in mind as a starting point is $58,495. Many states, including California, add more taxpayer dollars to the kickback, so let’s say the ELR will cost buyers roughly $55K after tax considerations and dealer cash on the dash. That puts the ELR neatly in between the price of a range-extended (REx) BMW i3 and a basic Tesla Model S.

The 2016 Cadillac ELR’s mechanical changes are huge. The drivetrain has been reprogrammed, and the result is a 4 mile gain in range and a small increase in its MPGe to about 85. Instant torque is now up to 373 lb-ft, and together the engine and motor make about 233 hp. This results in a 1.5-second drop in 0-60 mph time, to about 6.4 seconds. That’s quick, and for an EV, very quick. The only EV a lot faster than the ELR is the performance version of a Tesla Model S.

Cadillac didn’t stop with just a boost in power. The company completely re-tuned the elaborate suspension of the ELR, changed its electronic steering, improved its brakes, and much more. Another new aspect is the addition of a sport package that adds 20-inch summer-only tires, Brembo brakes, special sport tuning for the suspension, and a meatier steering wheel.

The steering wheel controls one of Cadillac’s nifty EV tricks. Instead of using the car’s wheel-mounted paddle shifters to shift the transmission, the ELR uses them to control the amount of regenerative braking the car does. Regenerative braking uses the drivetrain in generator mode. It slows the car and adds juice back to the battery at the same time. This cool feature lets the driver actively participate in the process.

Inside, the ELR sports cut-and-sewn trim that can include semi-aniline leather. Suede microfiber is used in the headliner and trim, just like on GM’s other special cars. Like most GM products, the 2016 ELR also gets 4G LTE connectivity. This means that Cadillac can offer real-time monitoring and software updates over the air (like in a Tesla), and your passenger can stream movies on Netflix.

Cadillac had a slow start entering the luxury electric-car world, and the 2015 ELR was a flop; there're no two ways about it. However, GM is deeply committed to making its green cars class competitive. The changes to the ELR are so significant, it's well worth a new look with an open mind.

Marketvelocity So great, that I leased a White one before they all were gone.

Users ranked 2016 Cadillac ELR against other cars which they drove/owned. Each ranking was based on 9 categories. Here is the summary of top rankings.

Have you driven a 2016 Cadillac ELR?
Rank This Car